Located on the banks of the Vendée river and historically the former capital of the Vendée, Fontenay-le-Comte is picturesque at any day of the week. But on Saturday mornings there's a popular market we don't want you to miss!

A brief introduction to the architectural pearl of the Vendée... City of Art and History  –

Like the rest of the Vendée, the area of what is today the beautiful city of Fontenay-Le-Comte has seen settlements since prehistoric times. The land was rich with game for the hunting, and at the time the area bordered the Gulf of Poitou which meant abundant fishing.

For a long time, Fontenay was a port on the ocean. On the small islands dotting the Gulf, abbeys were taking shape under Roman rule. Throughout the next centuries, monks used an ingenious way to claim the land and make it fertile, creating a vast landscape of canals used for transportation and irrigation known today as the Marais Poitevin.

The city must have been beautiful even then. In the La Fontaine neighbourhood, Roman villas with the famous clay rooftiles, baths, and inns coloured the hillside. A thriving trade was done on what is now known as the Place Bélliard. Lord Thiverçay, first leader of the city, was the owner of the Mines de Melle, silver mines located between Niort and Limoges which can still be viewed and might be worth a daytrip.  Thiverçay also struck coin and enforced a tax on Fontenay.

When the Vikings arrived with their mighty ships, they raided and plundered the city. In the mid-tenth century, the area was upset again, this time by several earthquakes which changed the landscape further.

In the 11th Century, the Counts of Poitou put their stamp on the city by building a large castle atop the cliffs hugging the Vendée river (the original was probably a wooden castle). In the 12th century, after the death of King Henry II, Eleanor of Aquitaine (1122-1204), born in nearby Nieul-sur-l'Autise, Queen of France and England renounced the vast territories she had inherited upon her father’s death, in favour of her son Richard the Lionheart (1157-1199). Her possessions included the castle of Fontenay.

The Kings of England ruled the territory (Plantagenet at the time) until 1259. In the Treaty of Paris, King Henry III of England (1207-1272, son of Cathérine de Médici) surrendered it to France. This territory consisted of Normandy, Maine, Anjou, and Poitou. The village prospered in the thirteenth century. Fontenay was officially named the capital of Lower Poitou, becoming a stronghold with ramparts and turrets. The ruins of the medieval castle can be admired in Le Parc Baron (more info below).

Prosperity suffered under the weight of the Hundred Years war (14th Century 1337-1453), returning in the 15th Century under Charles VII (1422-1461) with support of Jeanne d'Arc and regionally from everal lords of Poitou like Arthur Richemont, Gilles de Rais, Dunois de Mervent, and Amaury Lord Velluire. Admire a beautifully preserved half-timber house from the start of the 15th Century, on Rue des Loges. At the height of the Renaissance period and into the 17th Century Fontenay-le-Comte regained its splendor. From this time dates the Bélliard square with its arcade homes. Mullioned windows, triangular pediments (originally found in ancient Greece and Rome and re-invented in the Renaissance), wrought iron balconies, and asymmetric porticoes became a part of Fontenay's amazing architecture.

It must have been a colourful time in the city's history! At the corner of Rue de la Fontaine and Rue Goupilleau, admire the Fountain of Quatre-Tias (1542), a four-spout Renaissance fountain inscribed with the city's motto: Fons Fontanacum Felicium Ingeniorum Scaturigo ... Fontenay, fountain and source of wits.  Tias is patois (French dialect) for spout. The fountain is not original - it was restored by Octave de Rochebrun  around 1898.

In the second half of the 16th Century, Fontenay did see conflict related to the Wars of Religion. From this time period dates the fortified Maison Billaud on Rue Gaston Guillemet, which was rumoured to have underground escape routes to Protestant as well as Catholic sides. An interesting twist on keeping the options open!

In the 17th Century the immense project of drying the marshes that started in Roman times, was finally finished.

With the land fertile and boosting local trade, the King of France took note. Existing abbeys were deemed royal, Richelieu was appointed Cardinal with Fontenay the Royal Seat. Taxes were imposed on the poor - thus, also the abbeys. Local Huguenot (French Protestants) were often forcefully converted to Catholicism, forcing them to flee the area. Since many of them were merchants, and while the nobles remained exempt from taxes, Fontenay faced economic collapse.

An interesting side-note for our local Canadian and American friends: many Acadians, descendants of the French Protestants who fled the region to settle in Nova Scotia (starting in 1604), and later in New Brunswick, came from the region of Poitou. After the Acadians were deported by the British beginning in 1755, some sought refuge in Quebec and a large number were deported to Louisiana in 1785 and eventually became known as Cajuns.

Back in France, the 18th Century was the time of enlightenment , but harvests were poor, the population was hungry causing riots and looting - leading to the Revolution. Following his rise to power, Napoleon made La-Roche-sur-Yon the area's capital city. After many centuries of prosperity and power, Fontenay-le-Comte became a forlorn and forgotten city. The impressive Tour Rivalland (1881 - Rivalland Tower) was built just outside of  the Château de Terre-Neuve by Gustave Rivalland (1824-1881). The tower is constructed of concrete and decorated with Masonic mosaics.

The 19th Century saw Octave de Rochebrune living and working at Château de Terre-Neuve (Newfoundland). His etches are still revered and highly sought-after pieces of art. The copper plates can be admired at the castle museum (see info below). In the 20th century, famous Belgian author Georges Simenon (1903-1989) spent WWII at Terre-Neuve, where he continued to write the popular Inspetor Maigrait stories. In an interesting twist, this tower was occupied by the Germans during the war while Simenon was suspected of being a German collaborator, causing the author to be under investigation towards the end of the war. 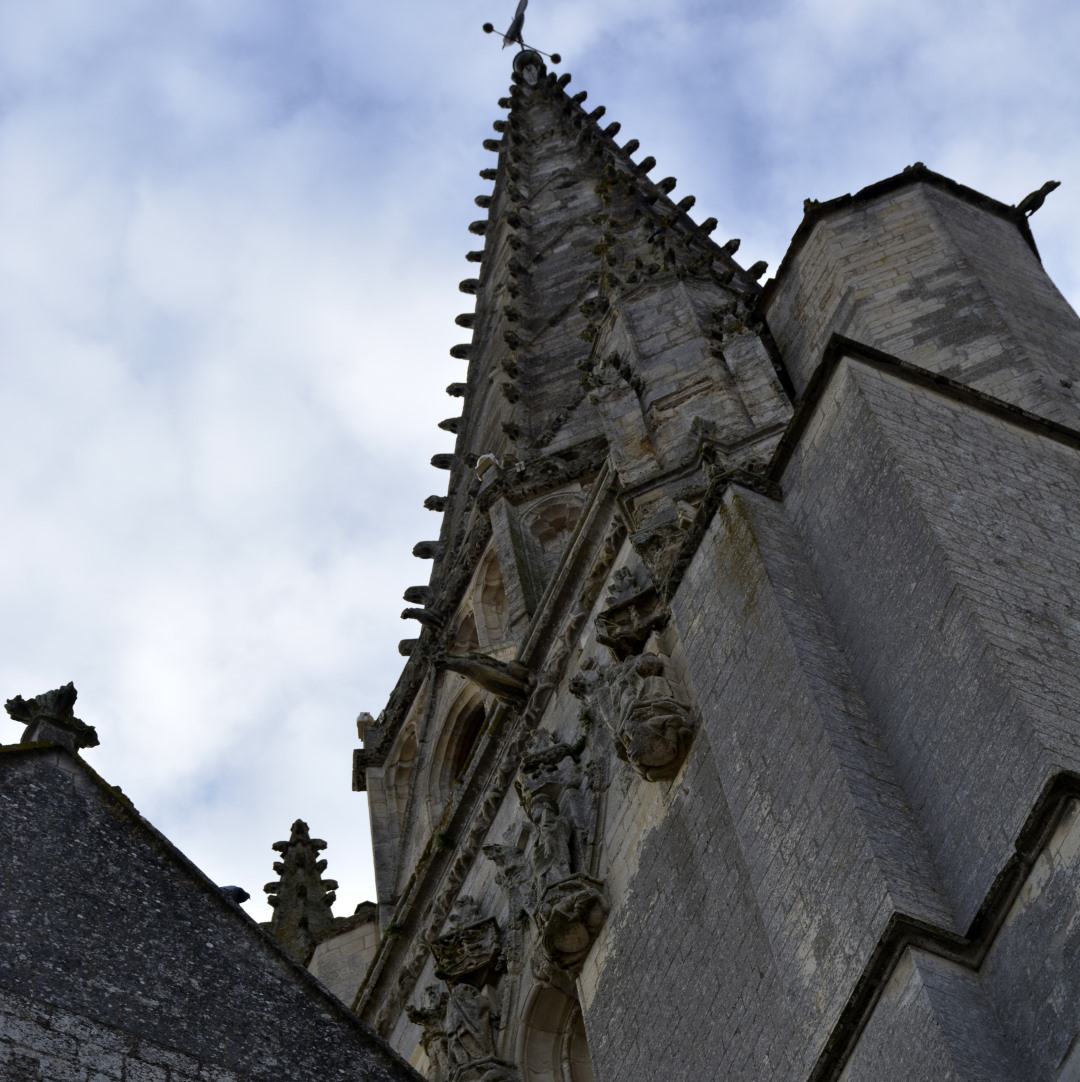 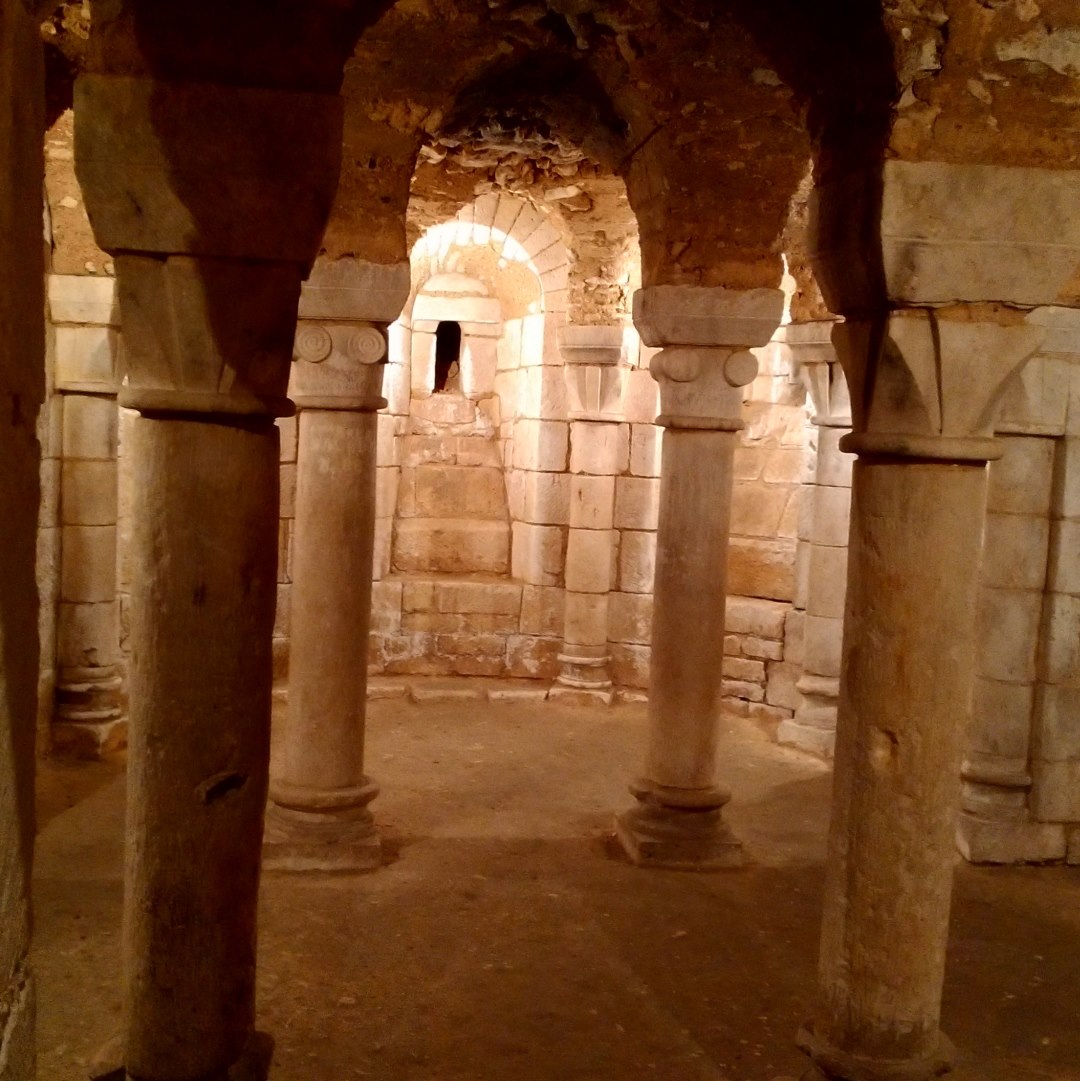 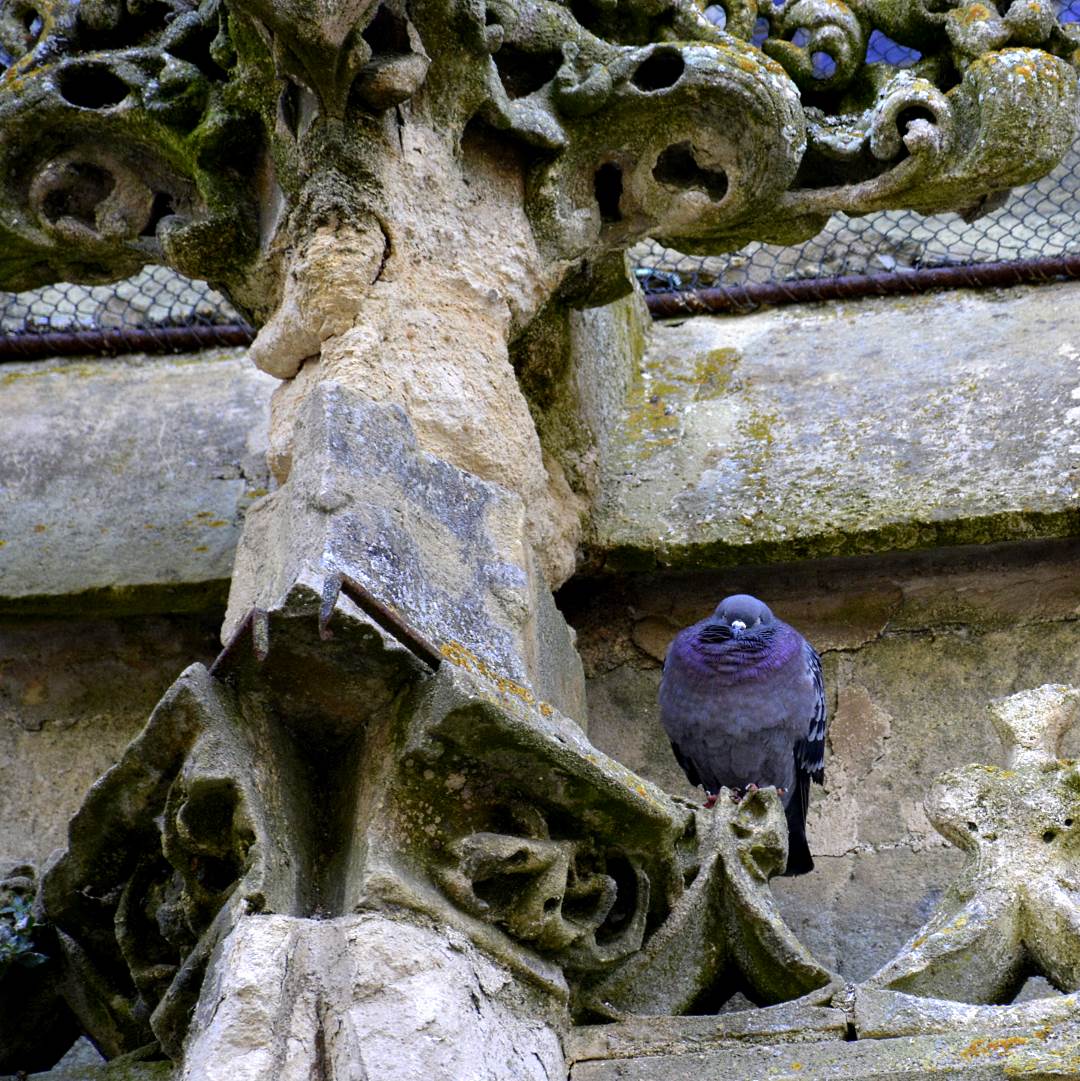 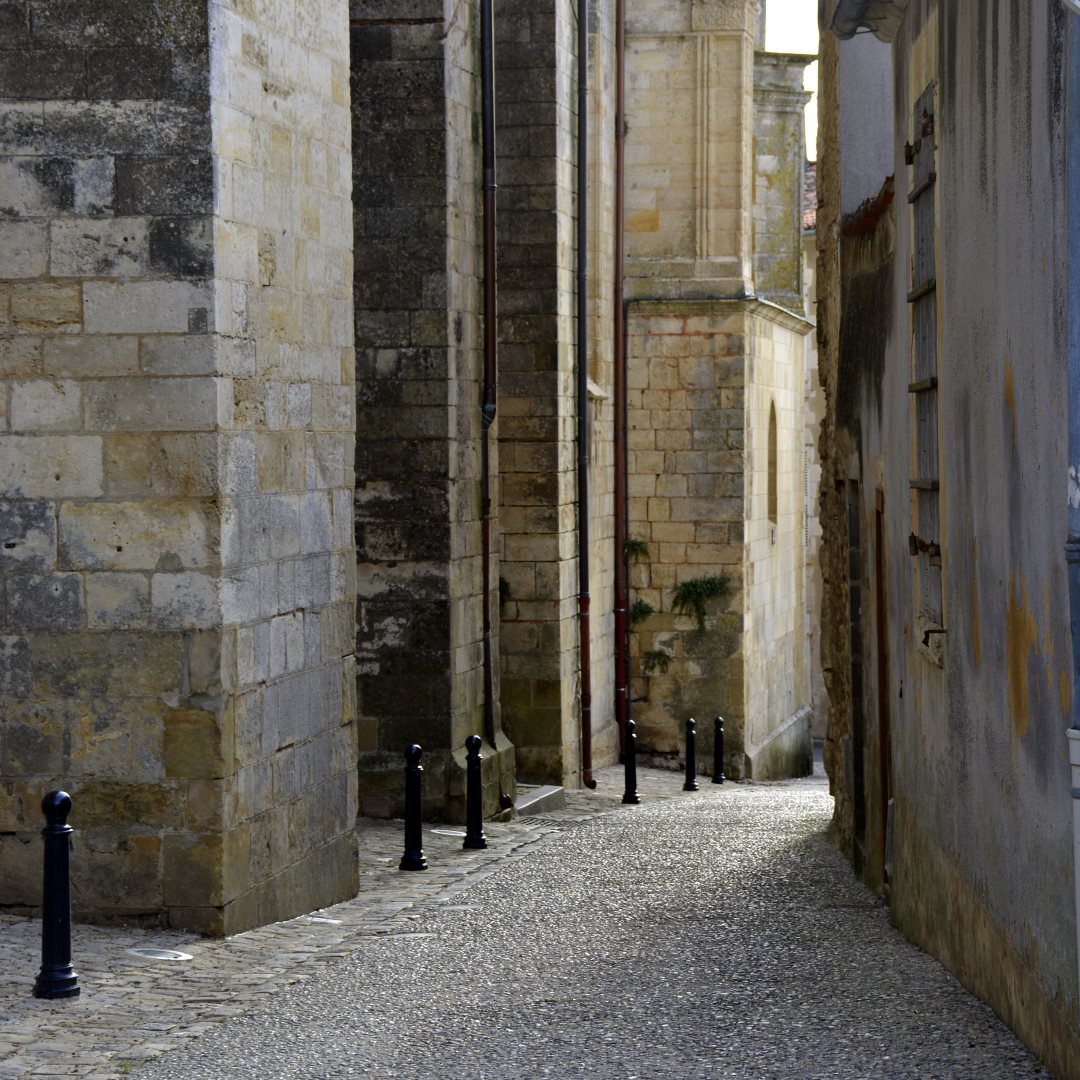 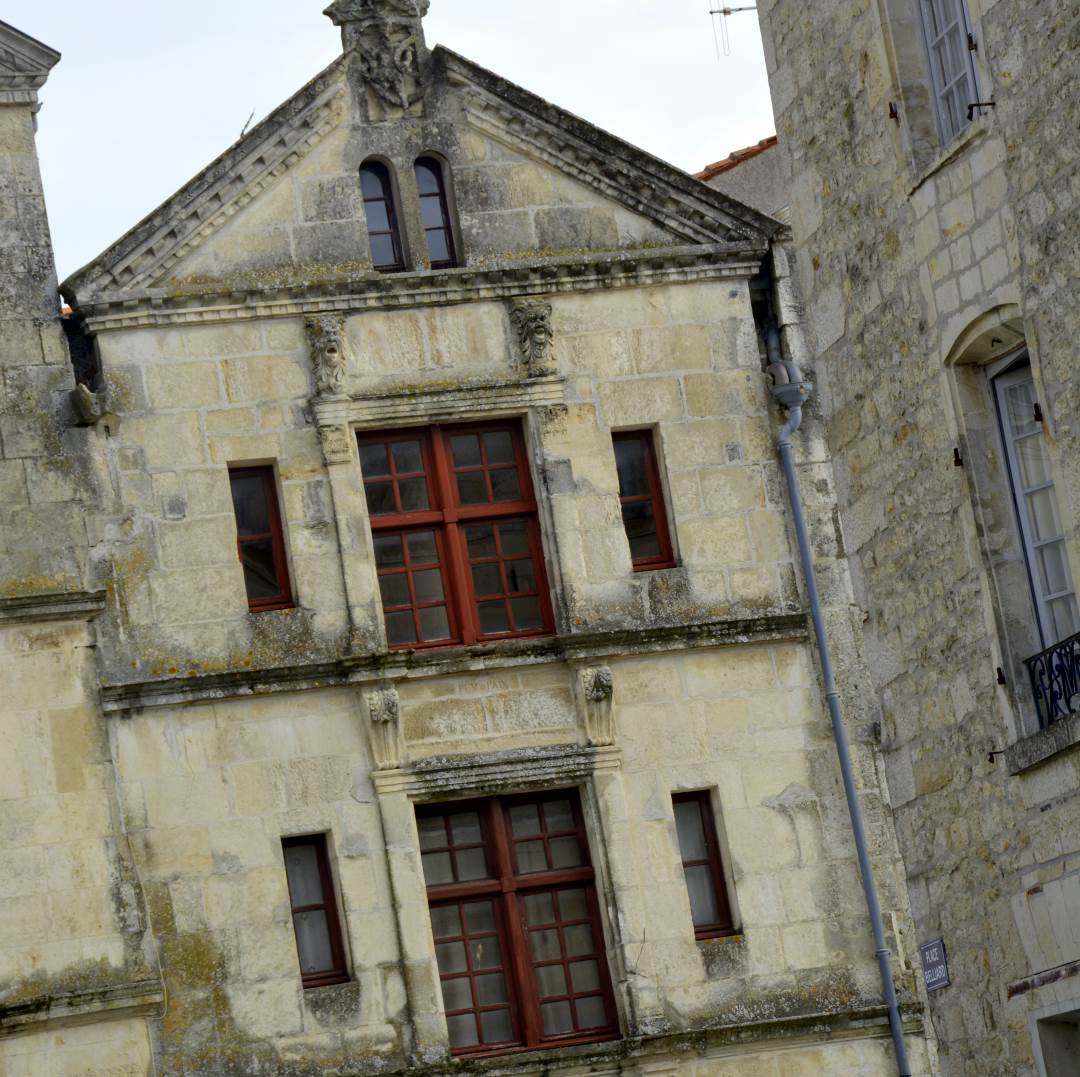 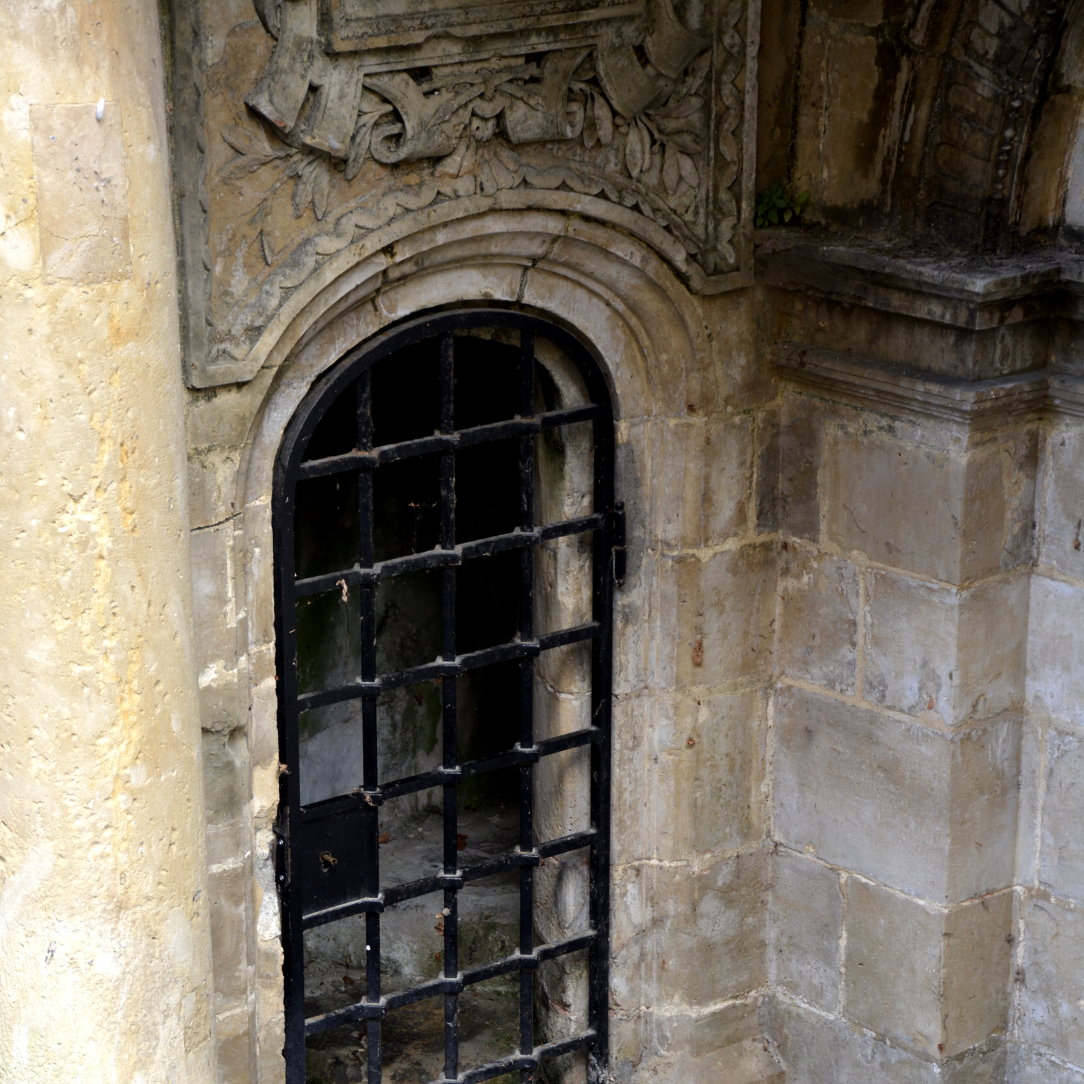 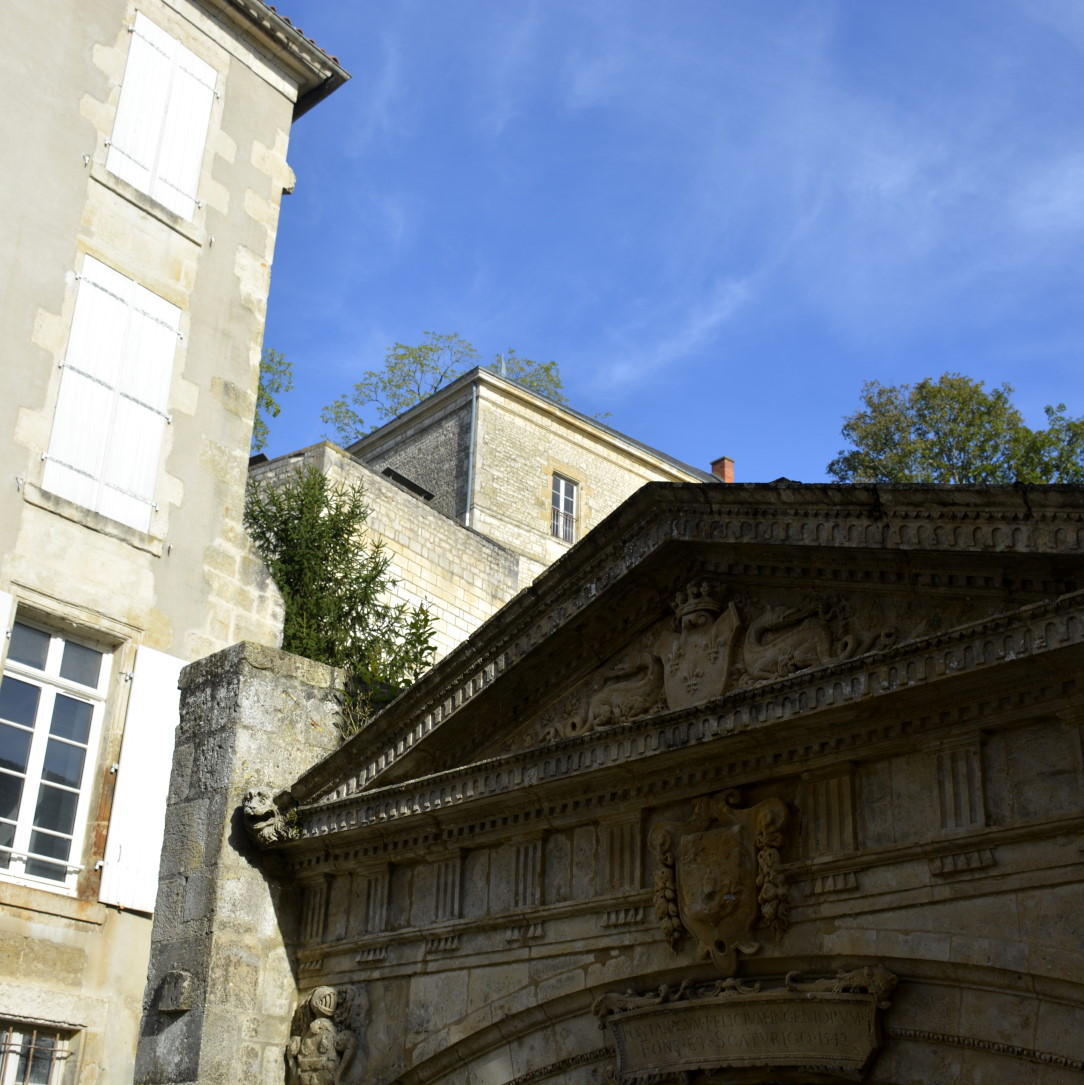 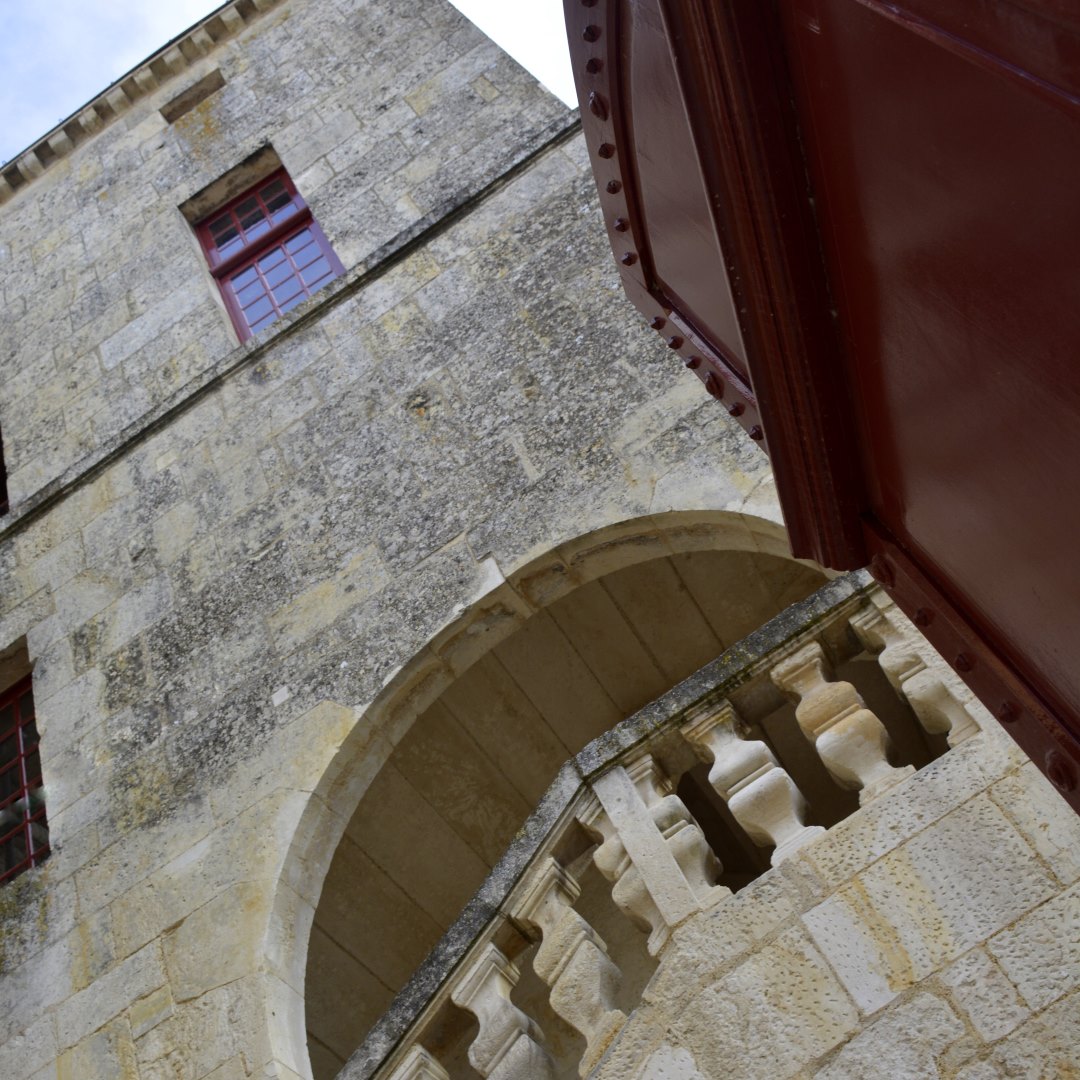 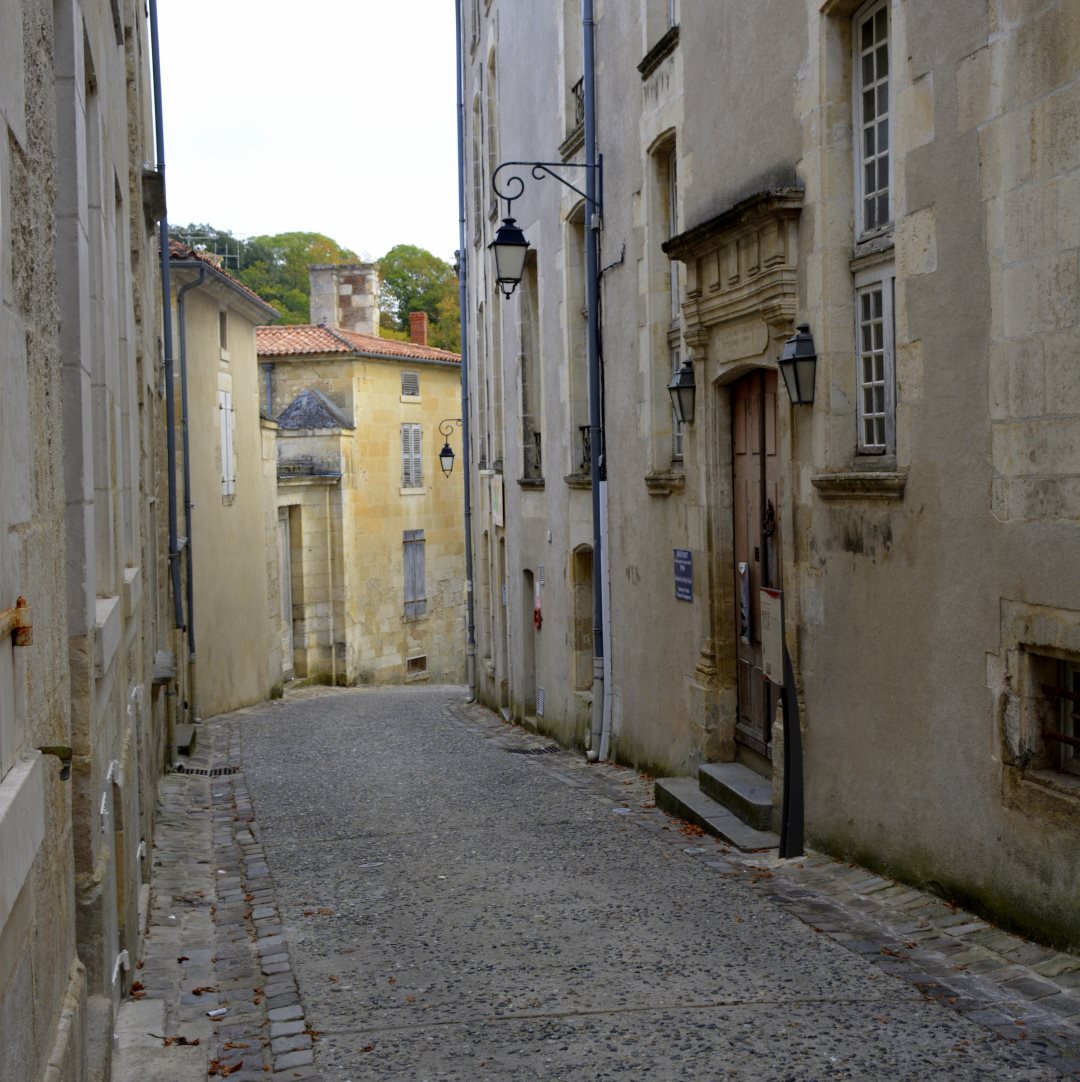 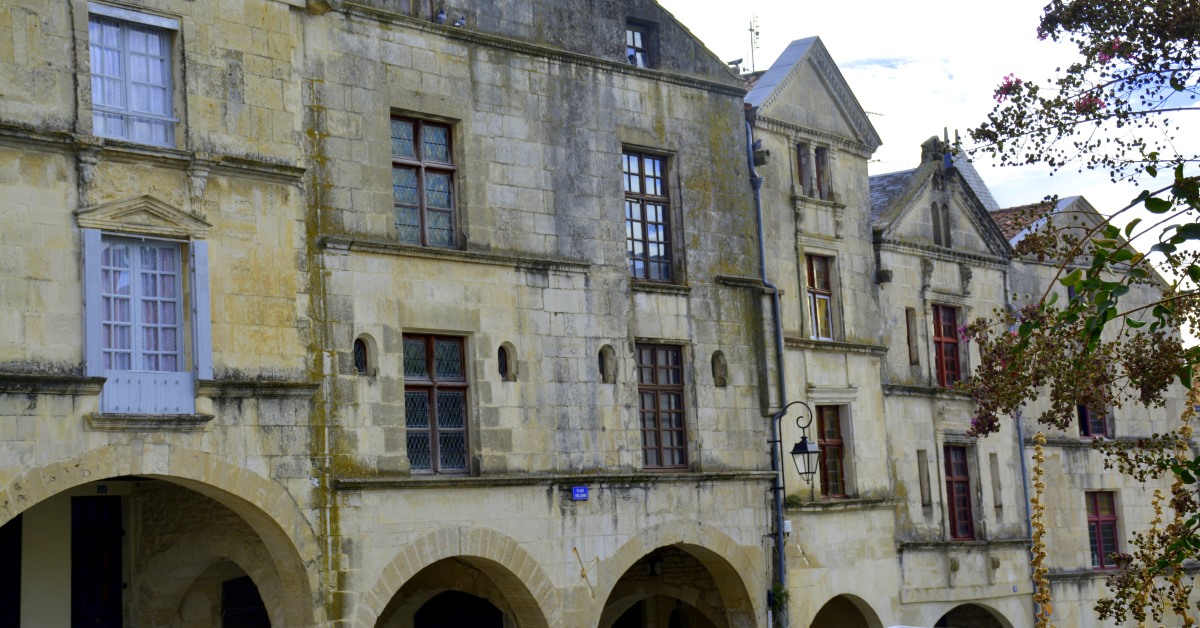 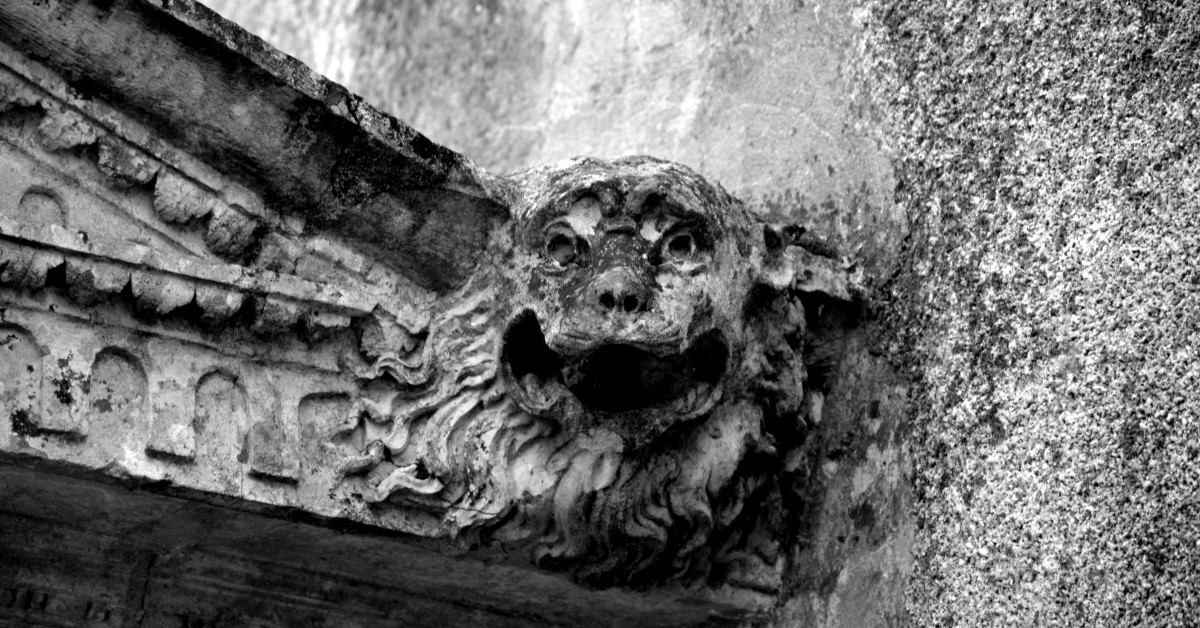 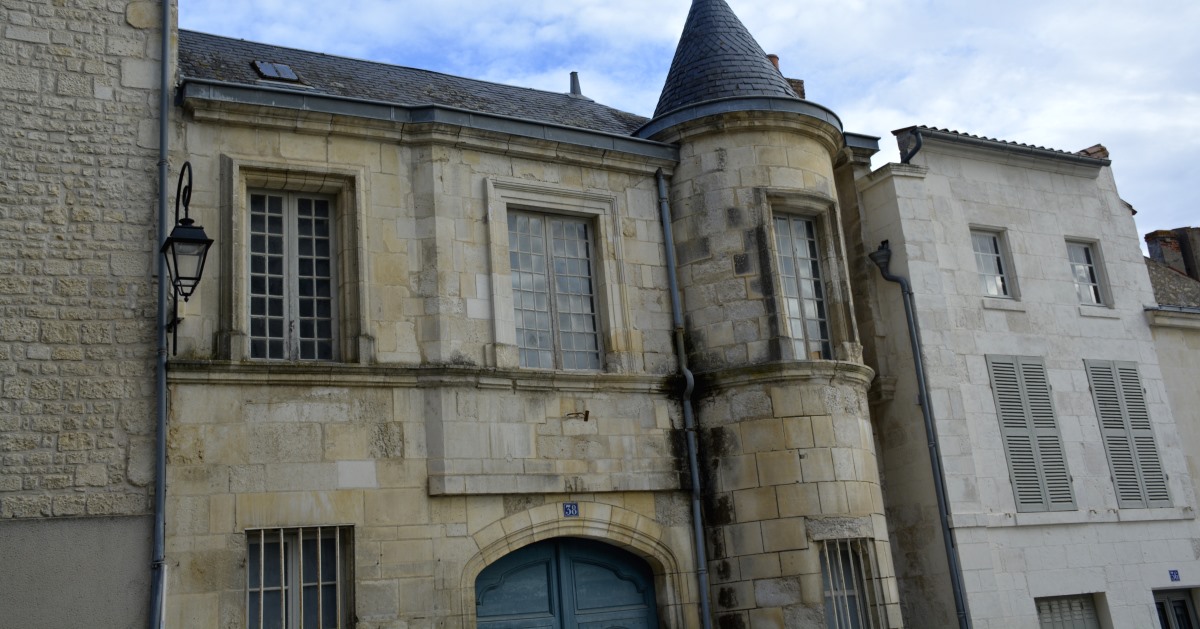 Historically, Fontenay was a major center of trade. In the thirteenth century a large trades hall was built. It was 140m long and 25m wide. It was soon filled with cloth merchants, jewelers, etc.  Pilgrims on their treks to Santiago de Compostella in Spain, stopped in for a meal, a rest and to buy donkeys and other supplies.

Isn't it awesome the trades spirit is alive and well in Fontenay-le-Comte? On market days the streets around Place François Viète are lively with colour and conversations, and market people selling their goods. Which is why we don't want you to miss it!

Open – The newly renovated Les Halles is open on Wednesday and Saturday from 8h00 to 13h00. Artisinal food vendors fill both levels of the market hall. On Saturday mornings the market includes outdoor stalls on Place Chevolleau and Place Thiversay for a total of around 140 local vendors.

Tips – For this itinerary we recommend you sight-see the picturesque streets around the Notre-Dame church. You will automatically arrive at the market. Enjoy a coffee or aperitif within view of the bustling market. You can also eat here, or choose a delicious paella or Thai food street food for a picnic. Fontenay-le-Comte is a picturesque village that hugs the banks of the Vendée river. Stroll away from the market via the alleyway next to the market hall to take in the views. 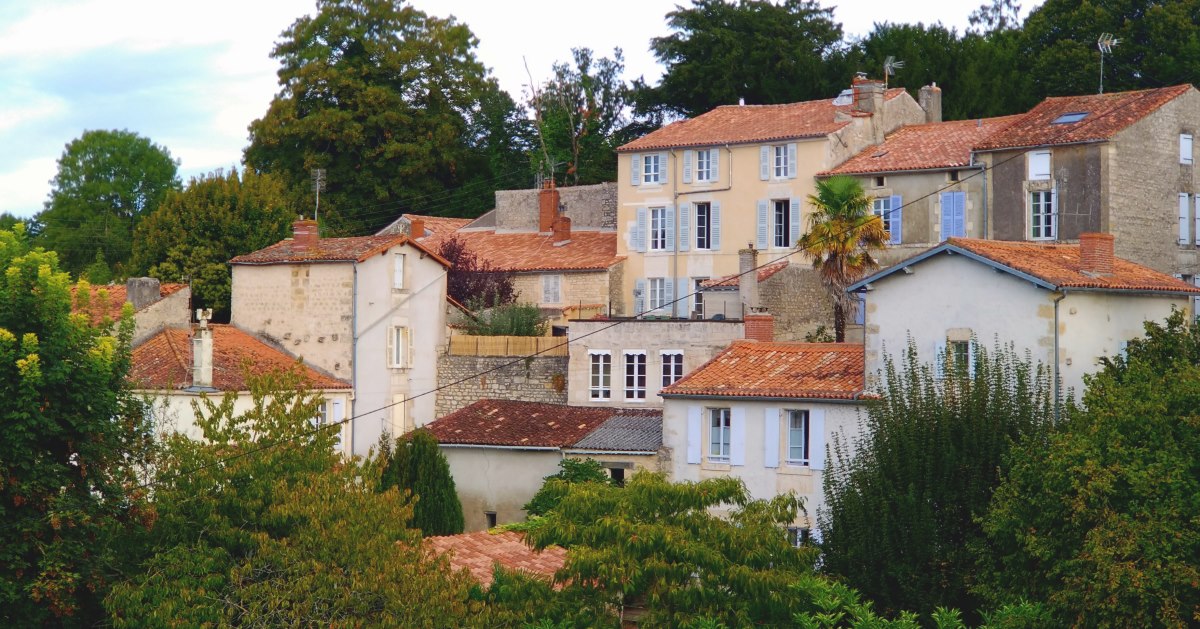 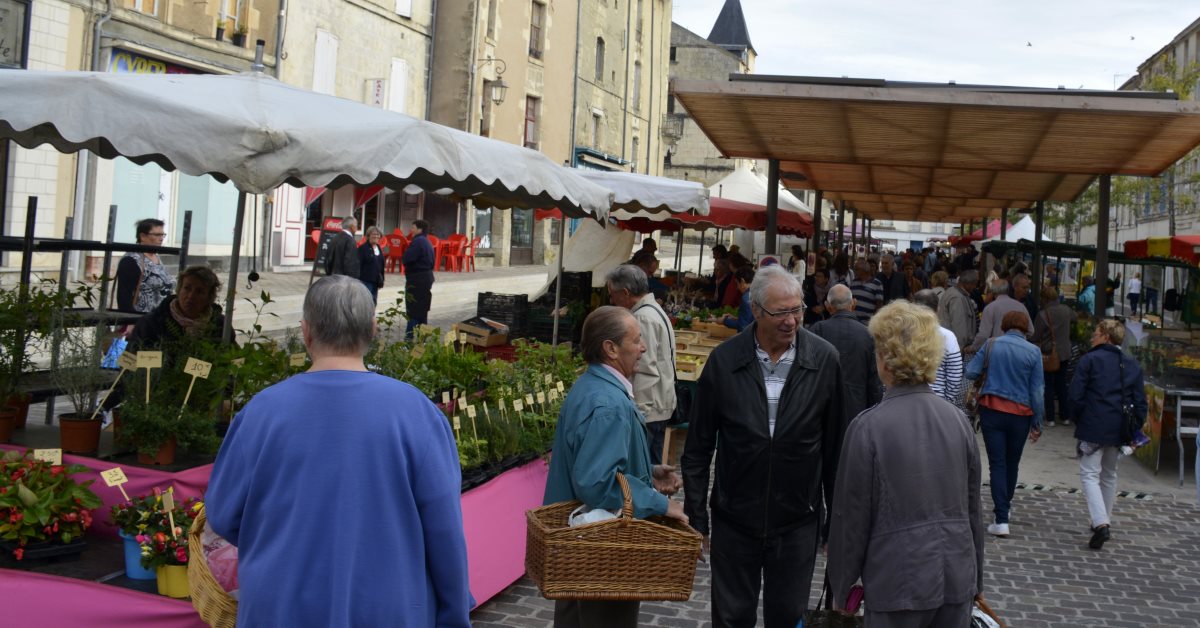 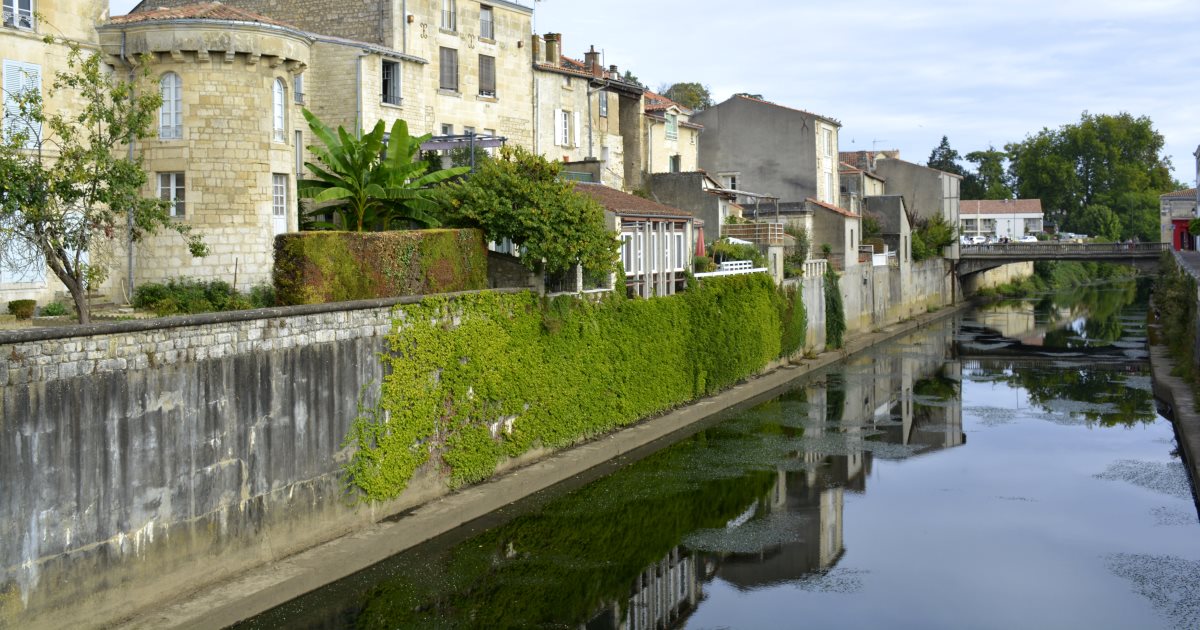 Take your time for a tour of the important Château de Terre-Neuve in Fontenay-le-Comte. Nicolas Rapin  (former mayor of Fontenay), a military man, lawyer and poet, built the chateau ca. 1590. Its interiors still represent some of the best remaining examples of Renaissance decor in France. Rapin eventually lost his possessions (around 1691) and the castle was sold more than once, in 1701 to a religious order. At the time, several different religious orders had settled in Fontenay-le-Comte.

The real hero of Terre Neuve (Newfoundland in English), was Octave de Rochebrune (1824-1900) who inherited the castle from his father Claude Tendron Vasse (purchased in 1848). Not only did Octave incorporate many pieces from e.g. the former Castle of Coulonges, into Terre-Neuve... by doing so he saved these treasures from being destroyed at the hands of Revolutionaries.

Through his connection with Henri d'Artois, the Count of Chambord, this lovely castle in south-Vendée is forever linked with France's most beautiful Loire Valley château!

Some furniture, a few pieces of Moliere's stage, and thirteen golden suns from Louis XIV's room were rescued from Chambord and installed here. Admire the splendid suns, and the stage piece used in a performance of Moliere's Le Bourgeois Gentilhomme at Chambord, in Terre-Neuve's formal living room.

French law dictates that historically important objects rescued and incorporated into another home like this, are to remain protected where they are. The rules for furniture are more flexible. Recently, two Chambord cabinets were transported back to France's most beautiful castle for a temporary exhibit. They can be viewed at Chambord in 2019.

The formal sitting room is adorned with a Renaissance fireplace displaying symbols of the alchemist formula, hence nicknamed "the Philosopher's Stone". As mantles go, it is impressive, in fact, the castle has several impressive mantles and doorways, and is beautifully adorned with Renaissance coffered ceilings with carved masonry.

Octave de Rochebrun also added spectacular terra-cotta sculptures of the muses that inspired him. The originals can be viewed indoors. The muses currently gracing the castle's facade are replicas. 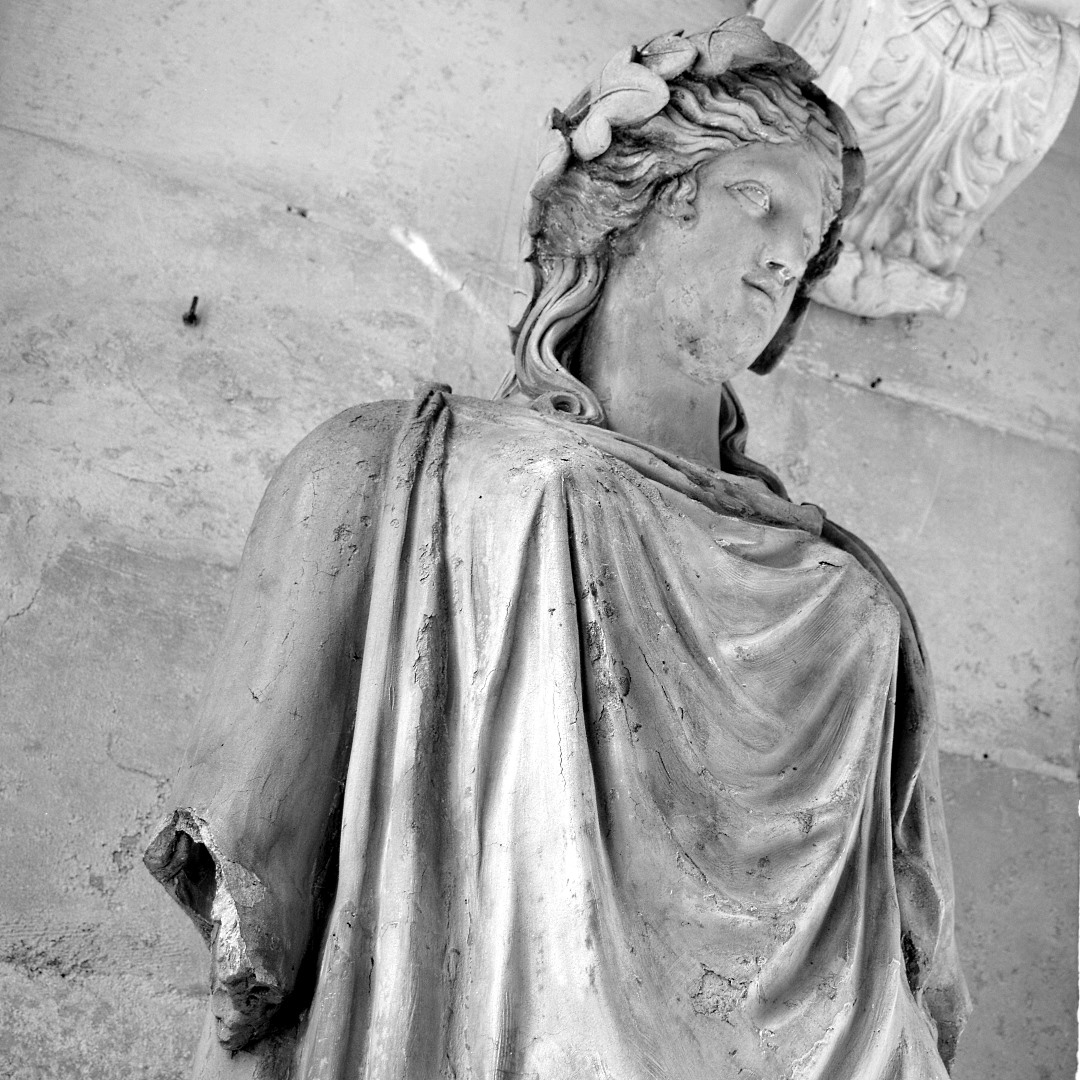 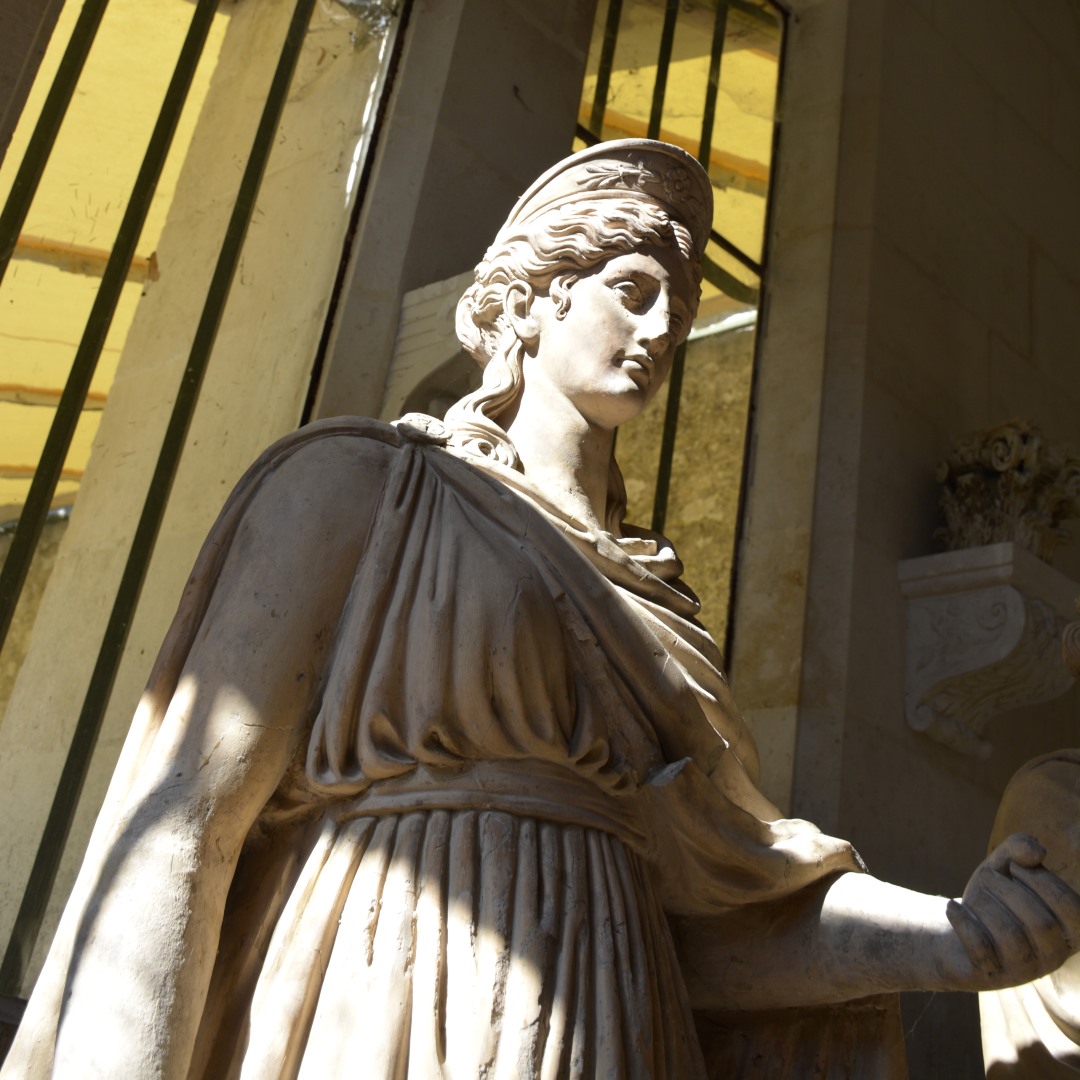 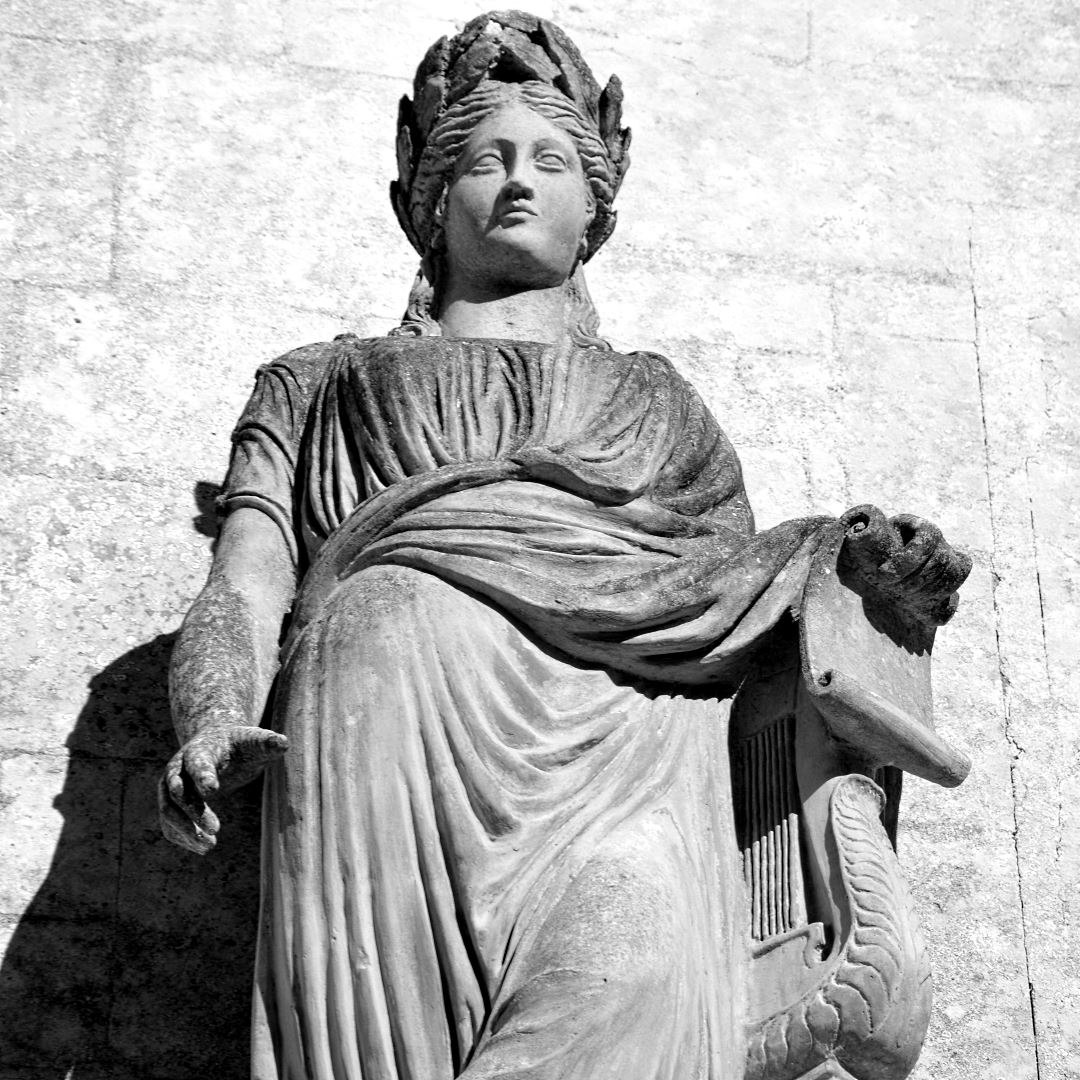 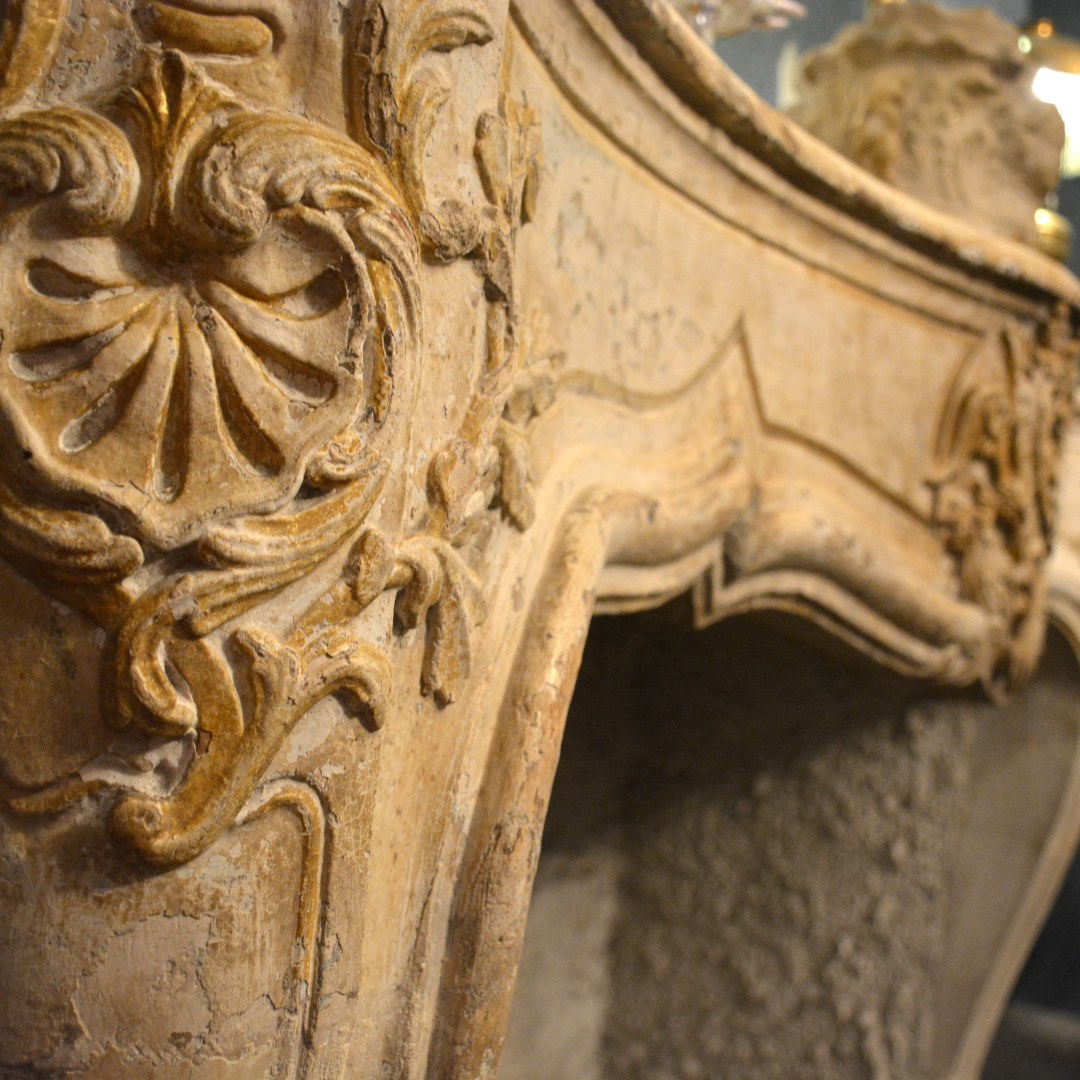 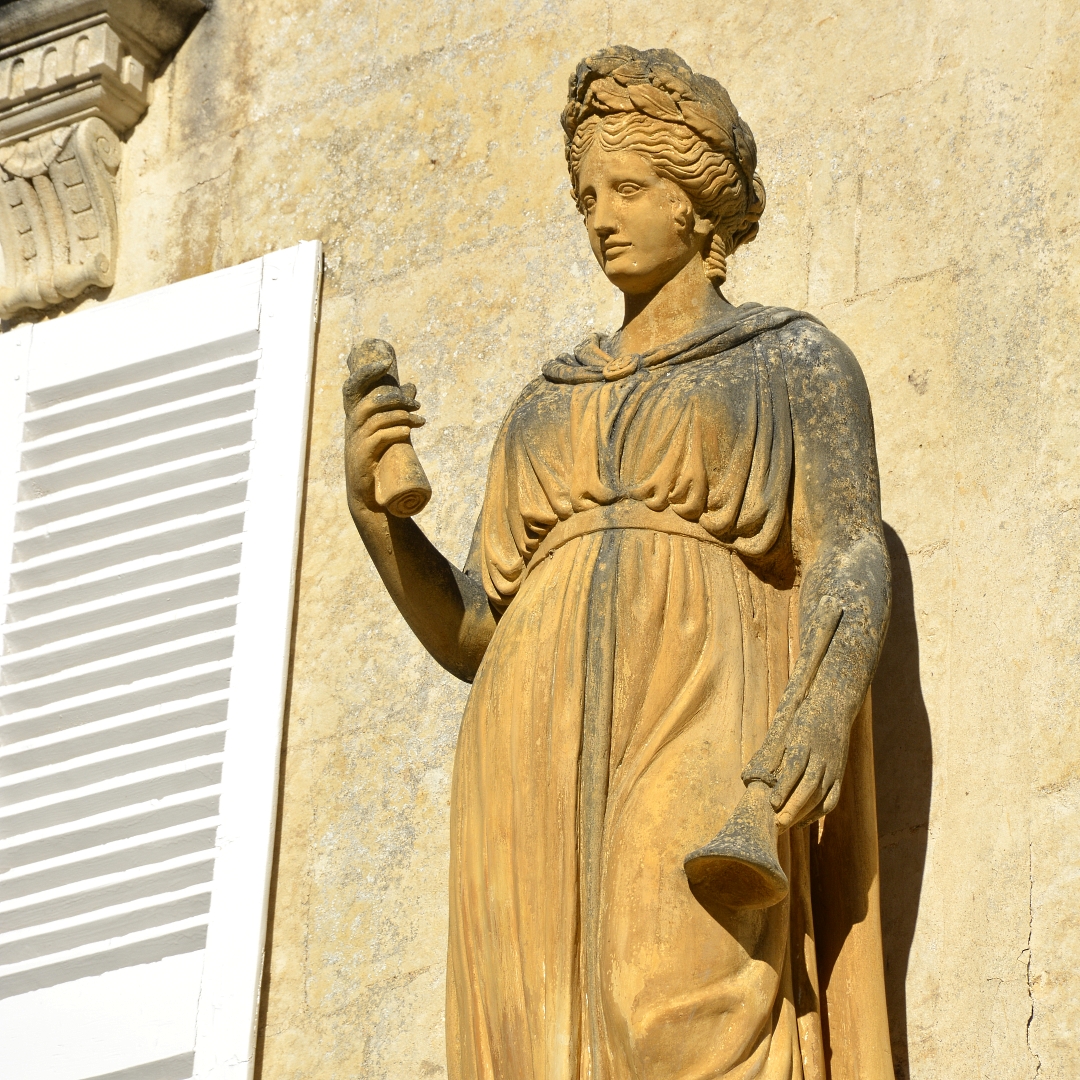 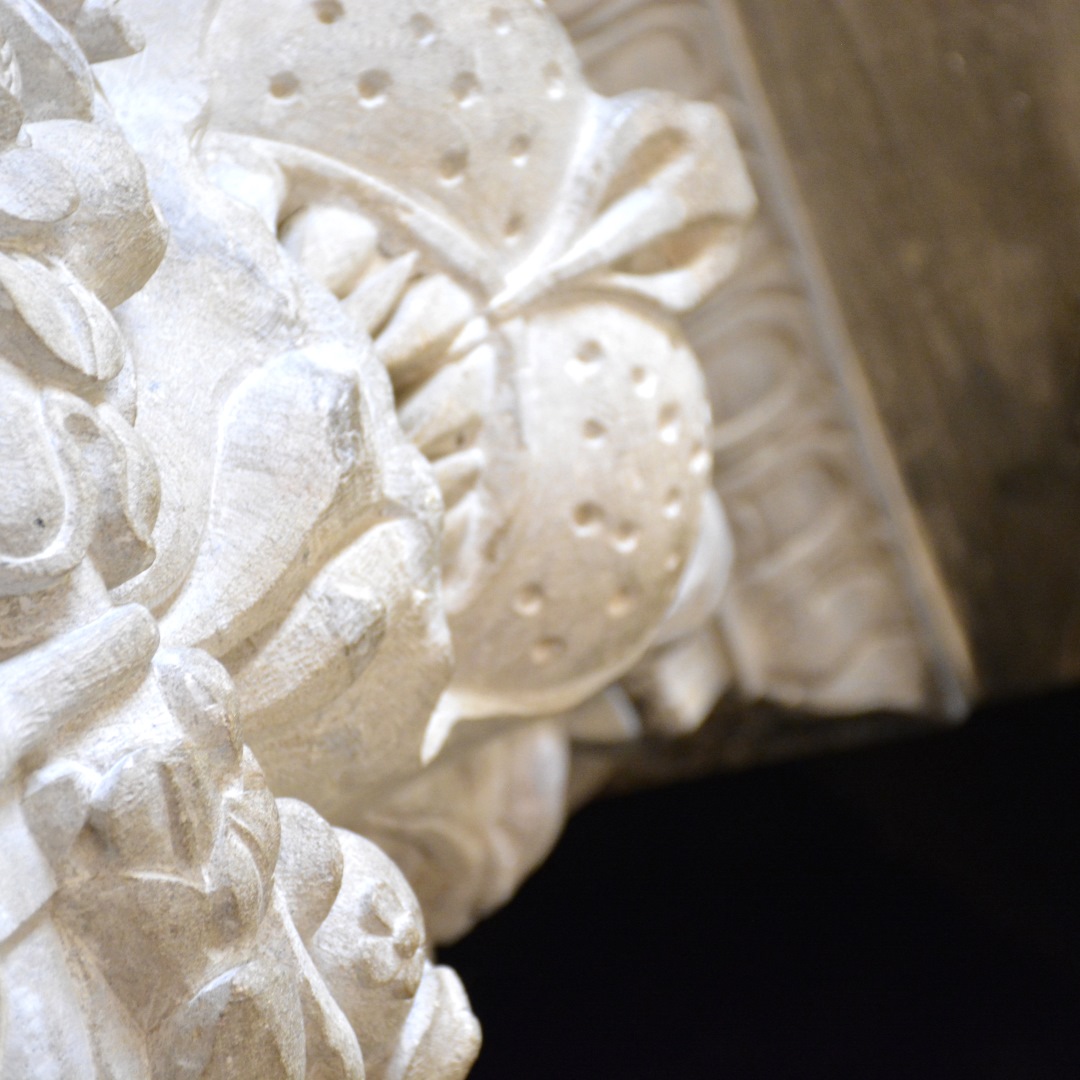 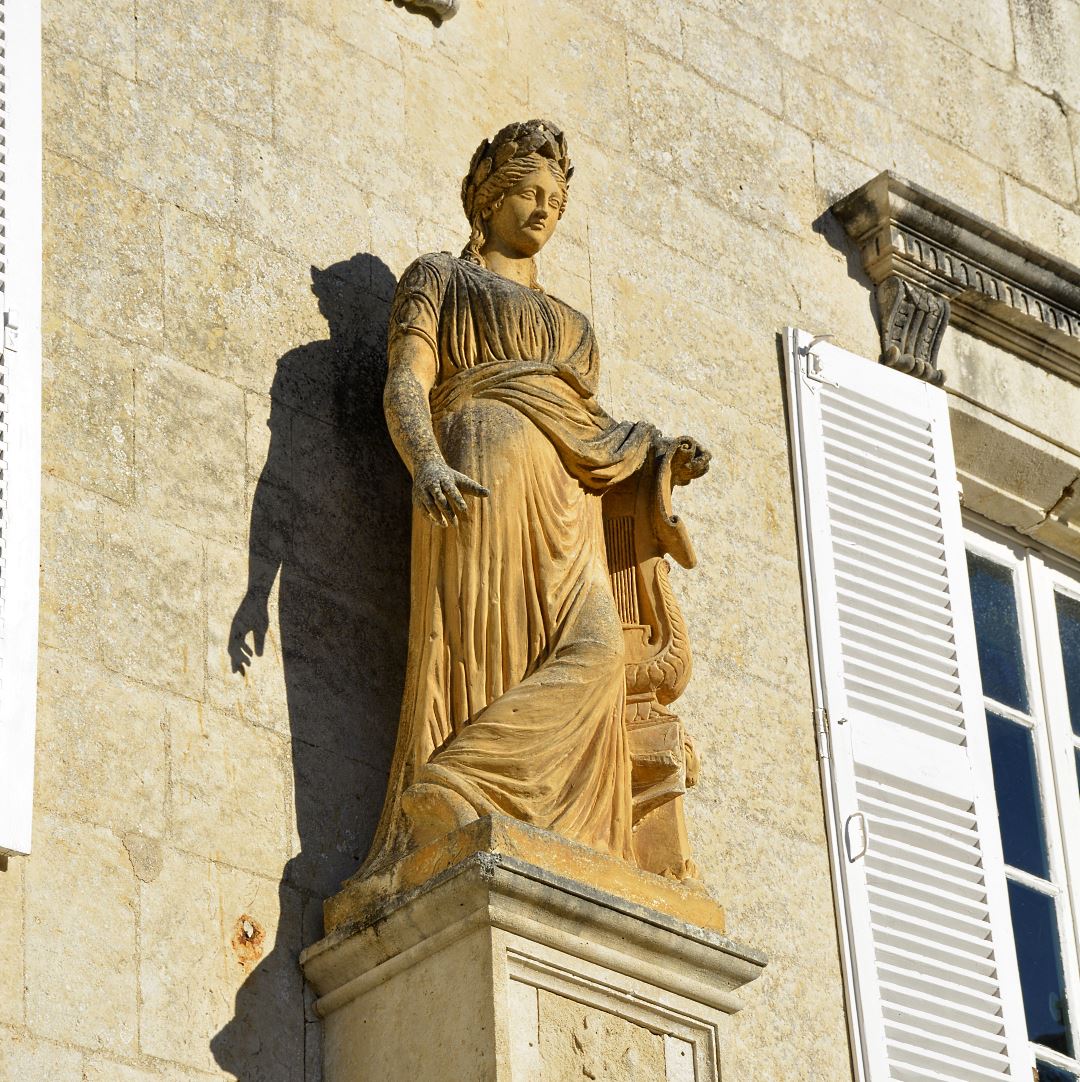 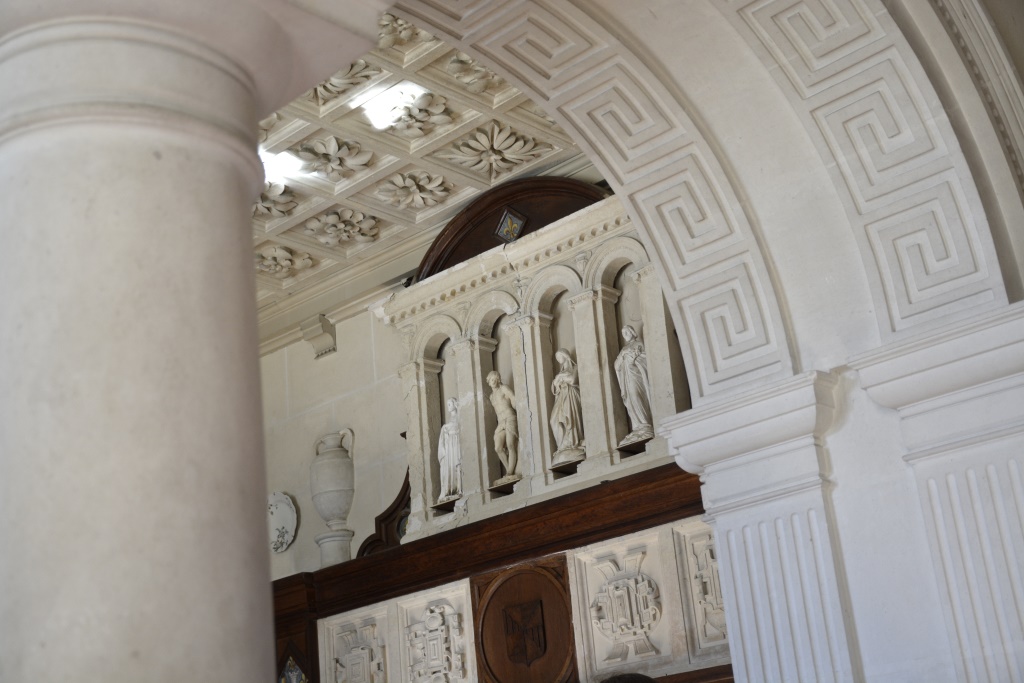 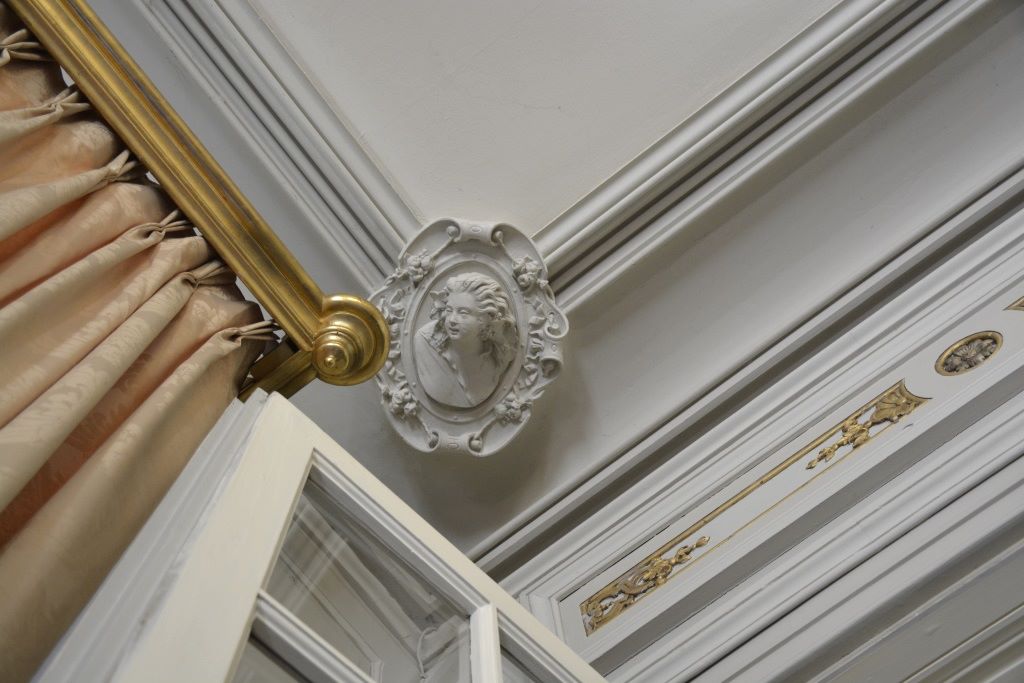 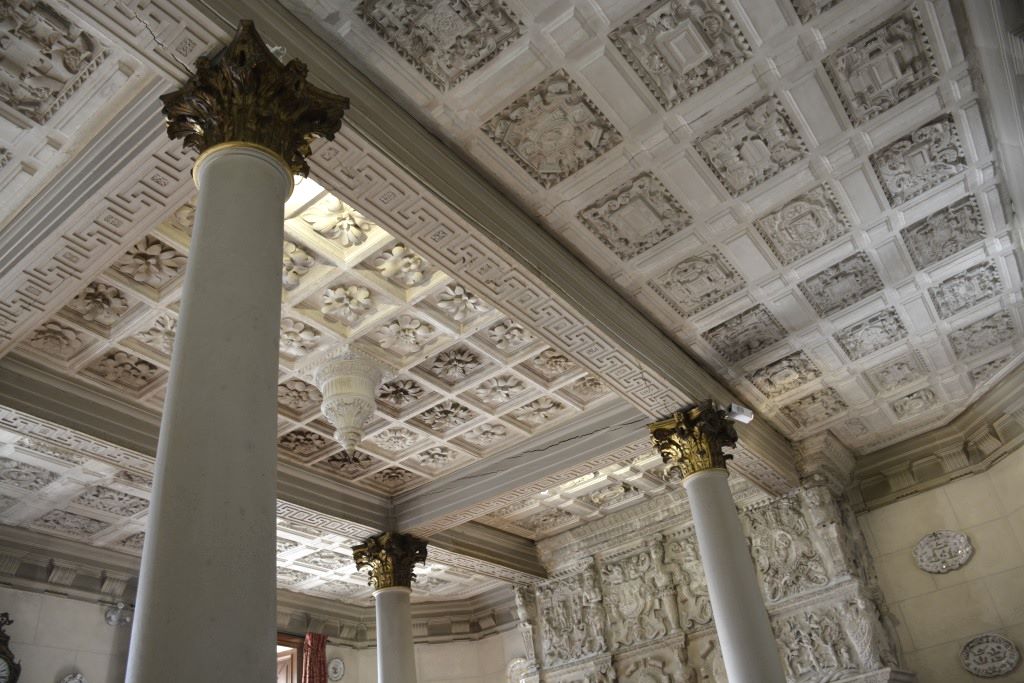 A walkabout the medieval ramparts

Walk the unpaved paths to the ruins of the old feudal château de Fontenay or Donjon des Cimes, for the optimal view across the densely built city's clay rooftops.

The tower of Boulaye, erected in 1595 for Charles Eschallard - Protestant leader and governor of Fontenay, dominated the city in a show of power.  The round tower topped by a beautiful Cedrus Deodara or Himalayan cedar tree ('deodora' means timber of the gods) is the Bastion of Guinefolle, added at the end of the sixteenth century.

Note the lovely turrets of the Villa Baron between the trees. During the revolution, the feudal castle was largely destroyed. In 1819, Monsieur Jean Baron purchased the area, which slopes down to the Vendée river, to keep the castle from being dismantled stone-by-stone to be used elsewhere.

In place of the Lord's medieval dwelling, Baron built the family villa (1841 - completed 1878)) on Rue du Pinier, but we simply adore this peekaboo view over the rampart walls from the park, don't you?

Le Parc Baron offers walking paths, picnic tables and benches, a playground, and medieval gardens for learning. Nearby is the Parcabout, an adventurous recreation area featuring cool obstacle courses to safely navigate through the park's treetops. 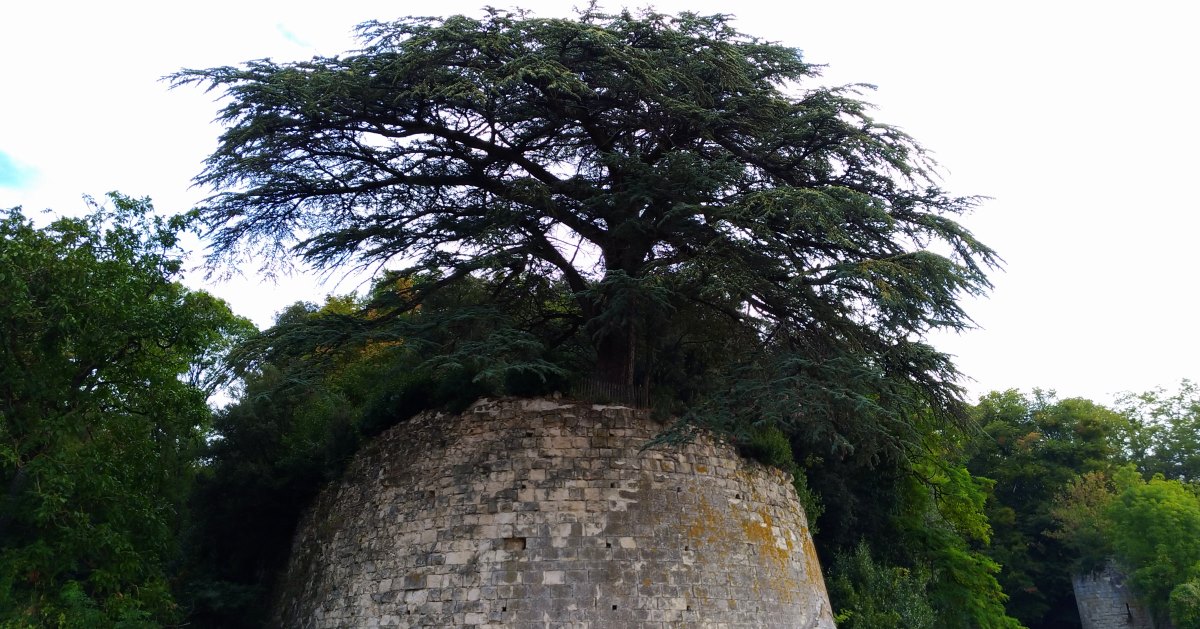 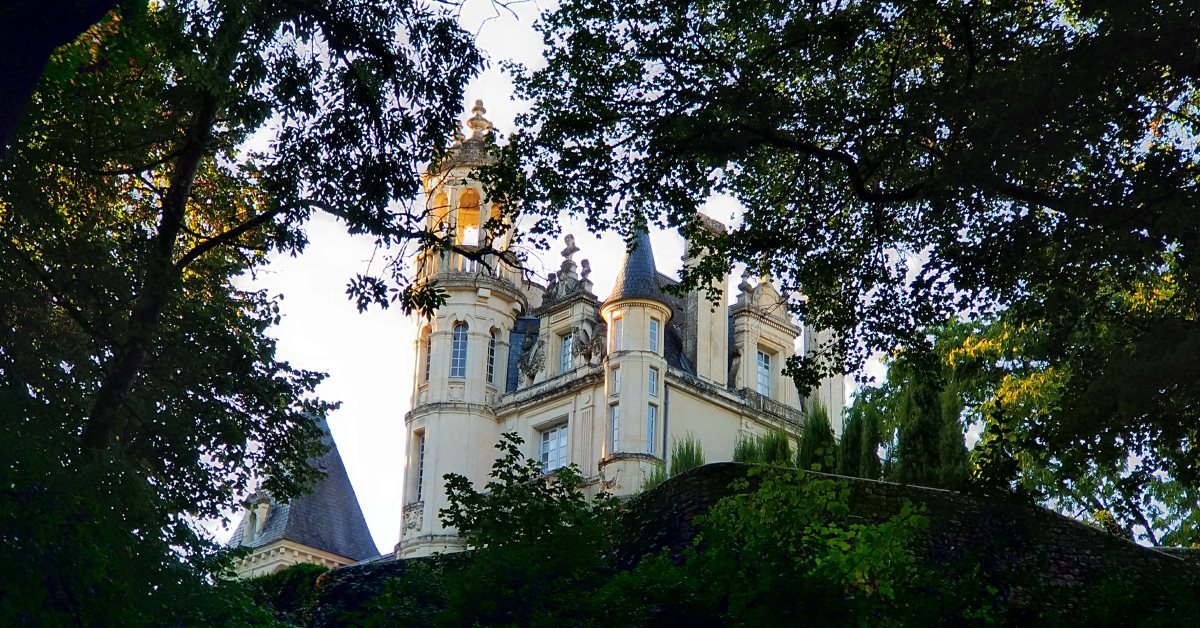 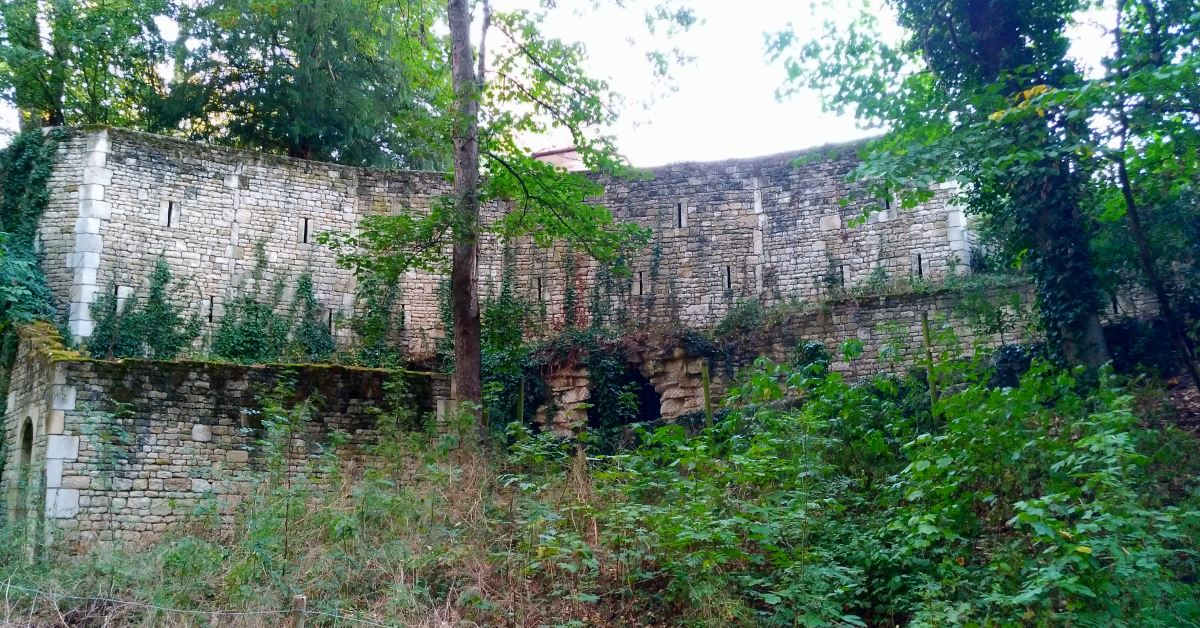 Make it a market day in Fontenay-le-Comte!

There you have it, our idea for a beautiful day trip in the Vendée! Whether you're on holiday, live here, or you're driving through–perhaps on your Compostelle pilgrimage– Fontenay-le-Comte is worth the time to travel a little bit deeper. Known as a city of the arts, architecture and history, the city is a lovely place to wander around.

The Belliard square and its arcaded homes, the many Renaissance buildings, the mansions, the half-timber houses of le Rue des Loges... the market...

No matter where your eyes turn or your feet walk, become a part of Fontenay's history like the Vikings, monks, Roman lords, Napoleon & Josephine, Octave de Rochebrun, Georges Simenon, and even Le Tour de France (2018) before you.

This itinerary can be strenuous for the elderly as Fontenay-le-Comte is quite hilly. Omit the Parc Baron. (Older) children will be entertained. It's an adventure!

Journées Patrimoine reduced entry fees to the Chateau de Terre-Neuve are valid on Sunday (third weekend in September. Do note it is very busy on that weekend.)