The Gamay grapevines that lend the Beaujolais Nouveaux their unique taste are cultivated over only 30,000 hectares ... in the world. Half of these vineyards are located in France, just north of Lyon, in the southern part of the Beaujolais AOC. More particularly, they cover 97% of the Beaujolais region. The Gamay grapes, a variety conceived by crossing the vines of Pinot Noir and Gouais Blanc, make excellent wines for ageing. But those wines are not what this post is about. Curious about the hype around the annual release of the Beaujolais Nouveau vintage on the third Thursday of November, we went in search of the what, the where, the who, and in this quest, discovered perhaps the more important—the why—of this story. We discovered it's not **just** about the wine!

The Gamay grapes have been established in the Beaujolais region north of Lyon since the beginning of the 17th century. Whereas only around 15,000 hectares remain, it is thought that once upon a time the variety may have covered over 160,000 hectares throughout France. The pest Phylloxera (microscopic, light-yellow insects related to aphids that suck on the roots and leaves of grapevines), may have destroyed the rest.

These remaining 15,000 hectares represent half of the 30,000 hectares of Gamay grown throughout the world. Embracing the concept of serving vin de primeur (wines released in the same year as the harvest) in their establishments, it was the Lyonnais barkeepers and restaurateurs that bought new Beaujolais wine by the barrels.

Among the many ways to transport the wine throughout the centuries, the simplest may have been by floating them down the Saône, a side-river of the Rhône. Ironically, the so coveted new vintage would then be served quite unceremoniously in pitchers dipped straight into the barrel.

Until 1937, the year the Beaujolais AOC was established, the barrels would be sold in November (harvested in September). But the AOC established in new rules that Beaujolais wine could only be officially sold after 15 December in the year of harvest.

This rule was overturned in November 1951 when the Union Interprofessionnelle des Vins du Beaujolais (UIVB) formally set 15th November as the release date for what would become known as Beaujolais Nouveau.

In 1985 the Institut National des Appellations d'Origine (INAO) established the third Thursday of November as the world-wide release date, a rule that stands today.

On the third Thursday of each November enthusiasts around the world receive and uncork the new vintage with varying pomp and ceremony. Beaujolais Nouveau is both the youngest wine to be bottled, and through clever marketing ploys, it is also the most trendy.

Beaujolais covers an area from the south of Mâcon to the north of Lyon. It is almost entirely planted with Gamay vines (97%).

The soils consist of more than 300 soil profiles and meticulous soil maps exist for each of the 12 appellations (red, white and rosé) that encompass the Beaujolais umbrella.

Of these 12 varieties the Beaujolais Nouveau is the first to be released. The wine is said to reveal what can be expected from that year's wine in the greater Rhône area. (Keep reading below images) 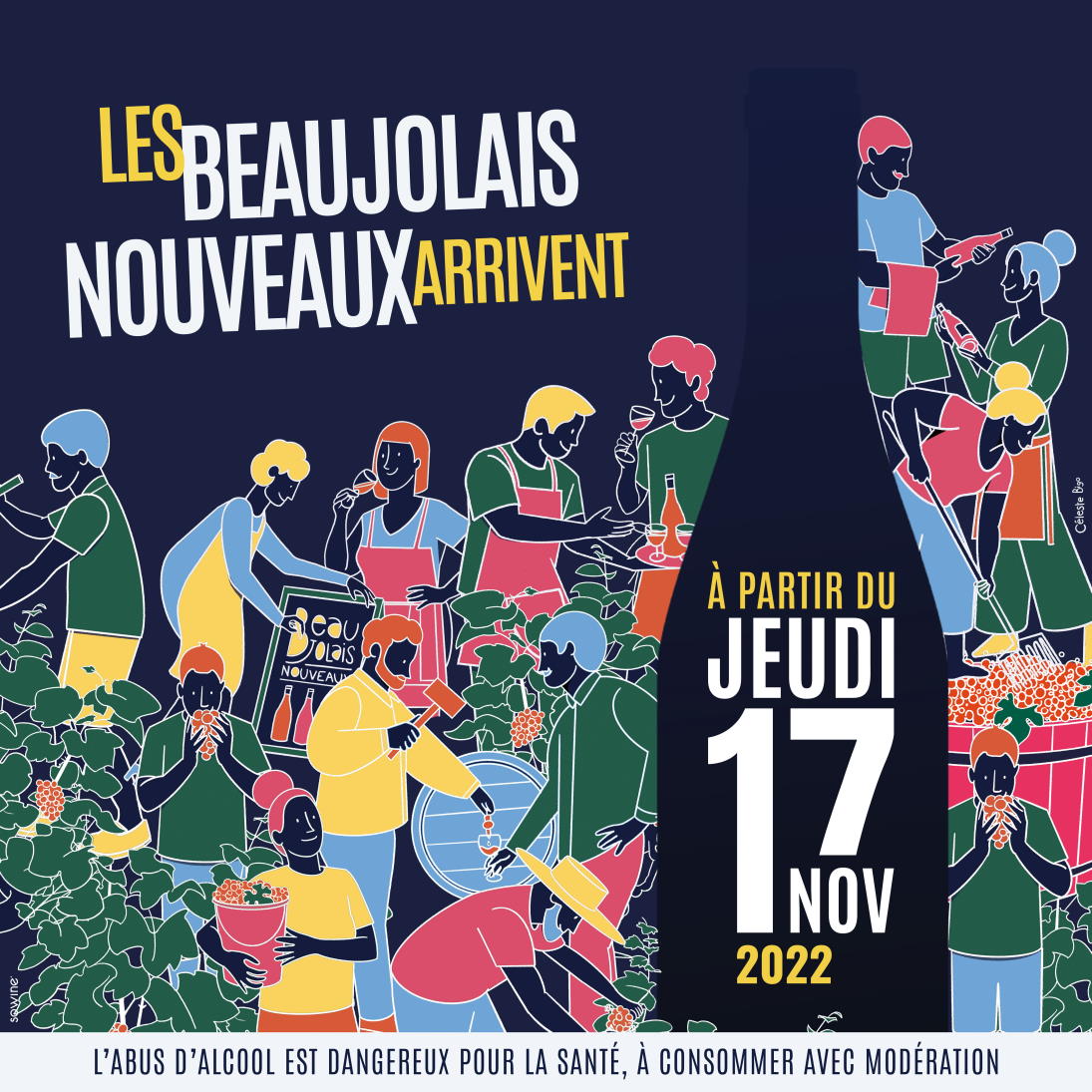 How is Beaujolais Nouveau made?

Beaujolais Nouveaux: from vine to table, around the world, in 6 weeks!

Creating the Beaujolais Nouveau is not simple. Each bottle contains not only the terroir, but the talent and knowledge of the local vintners to bring out the best in the grapes in any given year, as well as a set of very specific rules and regulations by which the vintners must live to achieve their trendy brew. In addition to the 300 soil profiles, these are a few of the other points that make the wine so unique:

Described once in the Washington Post as “wine of this vintage, fresh as the memory of harvest and raw as the experience of the year, unpolished by time, a reflection of the emotion of the moment.”

The Beaujolais Nouveau is intended for immediate consumption. It should be consumed within 6 months of release date.

Which brings us to the hype surrounding each release of the next Beaujolais Nouveaux.  Since centuries ago, the Beaujolais growers would gather to toast the end of harvest with some of their newly produced young wine. Fast forward to today, Beaujolais Nouveaux remains synonym to the first tastings of the year. In France, special events are organized in café's, bars and restaurants. Tastings and contests are widely organized as are hundreds of Beaujolais Nouveaux festivals. In other countries, like Japan, the tradition is an excuse for opulent ceremonies... by invitation only.

Each year, around 40 million bottles are sold in France and abroad. Indeed, Beaujolais Nouveaux vintages are exported to over 110 countries.  40% of the production is shipped to Japan, the United States and the United Kingdom. Japan receives a quarter of the exported bottles.

But no matter the country, this piece of culture and tradition rooted in France is more than anything an opportunity to socialize, to have a drink with friends, to debate the vintage, to swim in a haze of fruity red wine in appreciation of the hard work that goes into making the wine, and in making sure deliveries are made around the world ON TIME for the third Thursday in November, and ... possibly to invite a whopper of a headache the next morning. It is the worldwide event that reignites conviviality and sharing.

Yours truly has a different goal. Research shows there is also a tradition of preparing Coq au Vin with the new vintage ... a new tradition may be born at our house! 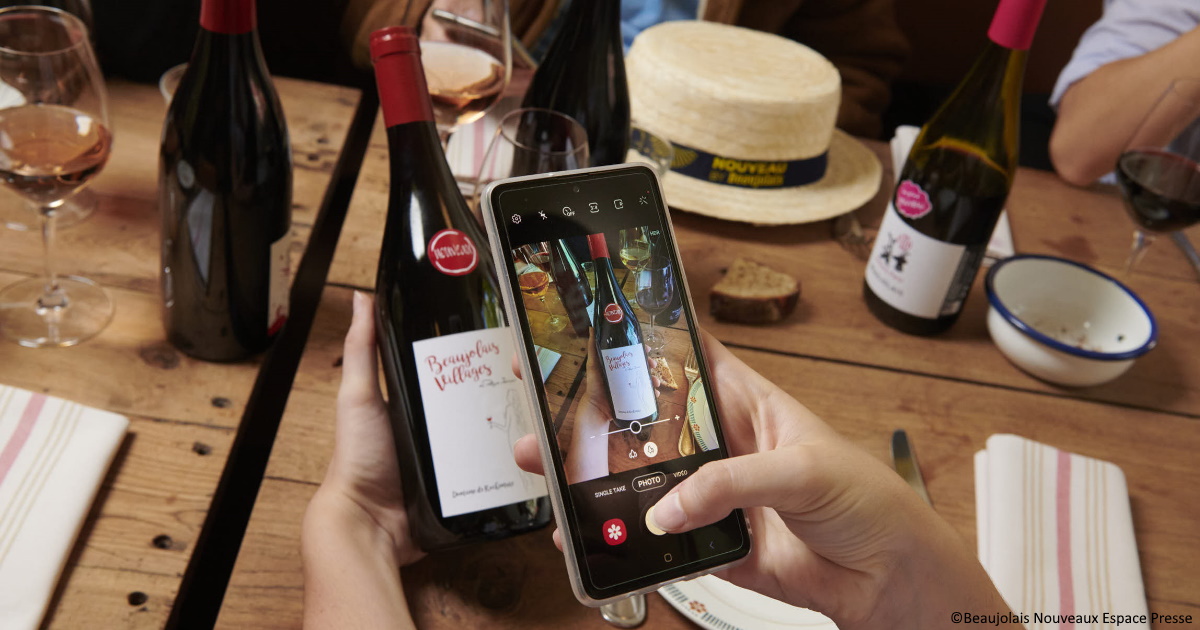 About recycling wine corks in France