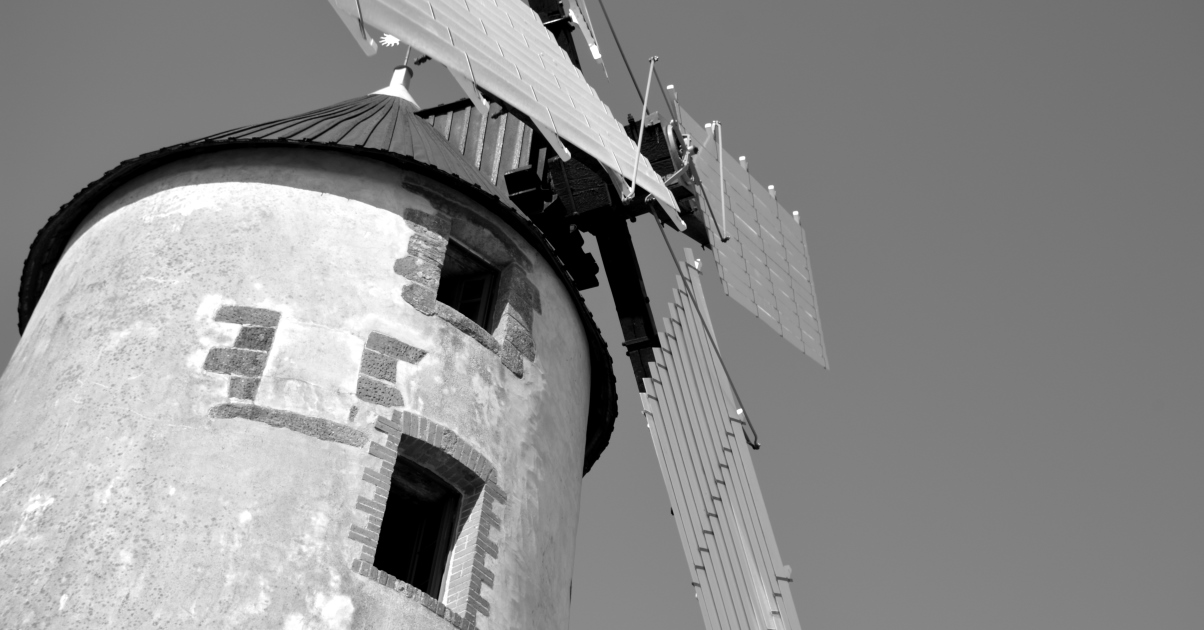 The windmill was omni-present in the European landscape and history shows their use wasn't limited to the production of flour. In periods of conflict the windmills were an effective communication tool, including in the Vendée.

A windmill is a structure that converts wind power into a rotating energy through a series of  toothed wheels, mechanisms and millstones, grinding various grains into usable products like flour. The earliest known wind and water powered grain mills were used by the Persians (Iran) from the 6th to the 10th centuries as well as by the Chinese in the 13th century. The vertical windmills seen in Vendée use a mechanism with sails that rotate in a horizontal plane around a vertical axis. The first mentioned "vertical windmill" in Northern Europe dates to the late 12th century.

Bread in its countless variations has always played an important role in cultures around the world. For centuries, women ground grains by hand, a time consuming process. But, necessity is the mother of invention, and this certainly applied to keeping families fed.

After all, the need for flour never ceased. Farmers would bring their grain harvests to the local miller for grinding. The miller often owned the windmill outright, and employed helpers especially during the harvest when the windmills were in full-production.

The profession was very important in the community, and fairly lucrative as well. But being a miller was not without dangers. They often suffered from illness caused by the constant presence of flour dust. Inhaling it could cause anything from asthma to Celiac disease, and extreme fatigue. The presence of dry hay also caused a fire hazard which is why the wheel mechanisms are made of wood, not metal. While metal would require less maintenance, hay could easily catch fire from the sparks caused by metal to metal friction.

The windmill was omni-present in the European landscape and history shows their use wasn't limited to the production of flour. Along the Atlantic coast, fishing boat sailors used the windmills' large white sails to anticipate the direction and speed of the wind. But the reverse was also true. Millers monitored the boats’ sails for sudden wind shifts. This allowed them to quickly make the necessary adjustments.

In periods of conflict the windmills were also effective communication tools. Through various positioning of the sails, a code was derived as a sort of warning system.

In the Netherlands this system was used as recently as WWII, and anno 2014 after the downing of Flight MH17 the Dutch angled their windmill sails to the X position as a sign of mourning their compatriots.

In the Vendée there are no fewer than 207 known windmills - now in various states of ruin or restoration. During the  Vendée Wars, they were used to relay the position of Republican troops, allowing the Vendéen army strategic advantage. In WWII the German troops sometimes commandeered them as observation posts, and even fortified them.

The longest operating windmill in France stands proudly in the countryside of the village Sallertaine (85300). It has been in continuous use since the 16th century. 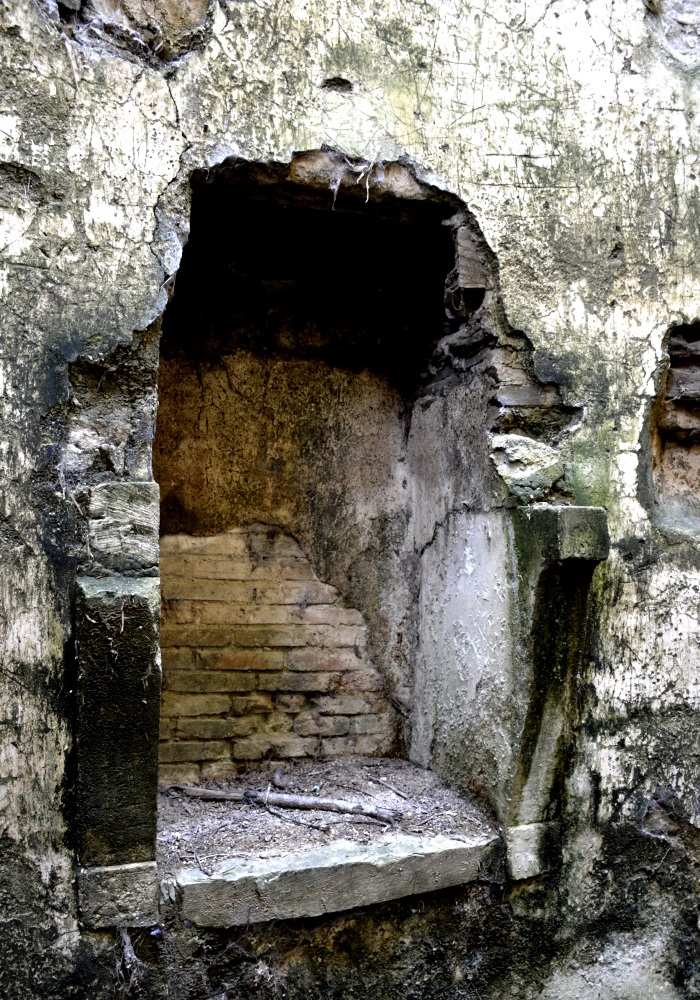 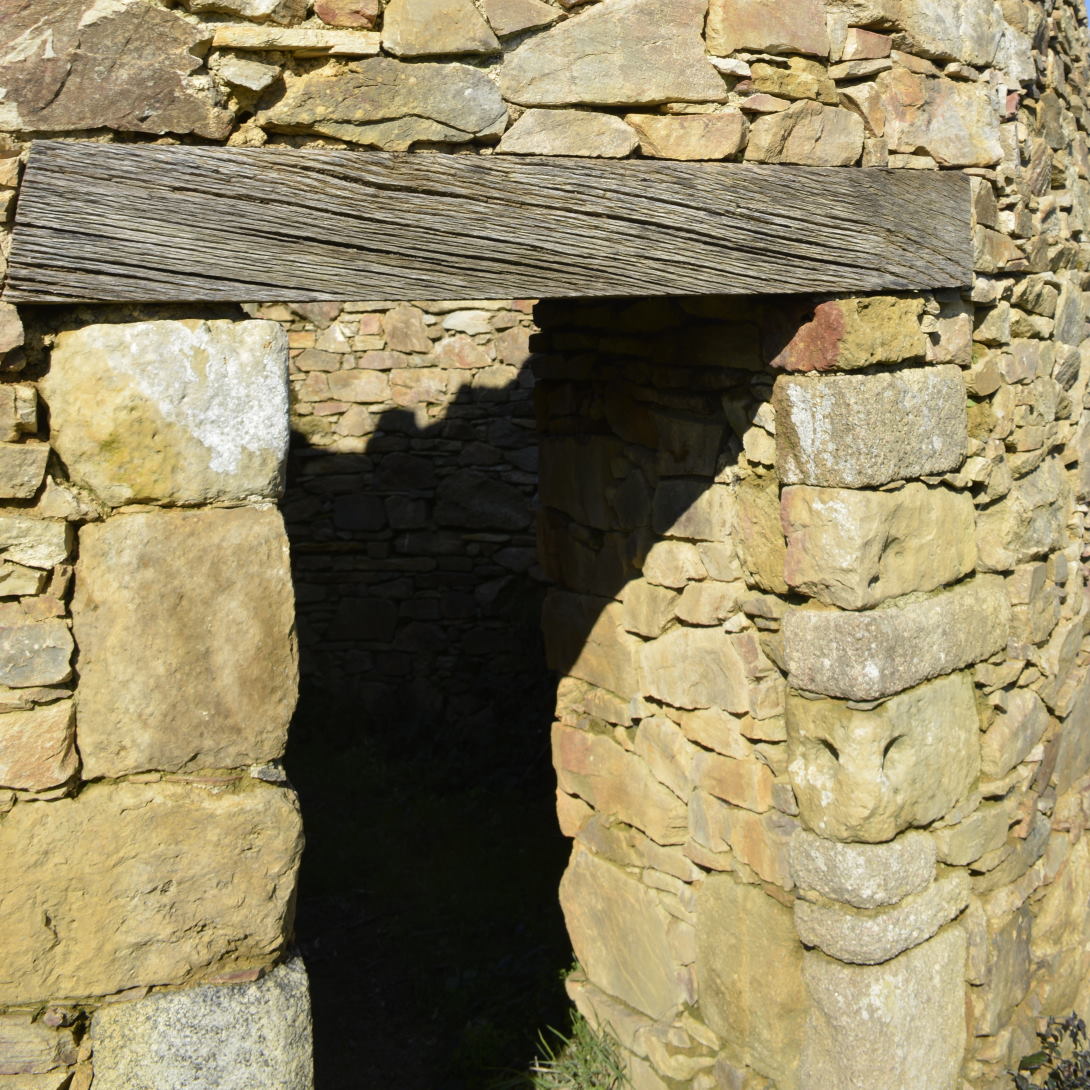 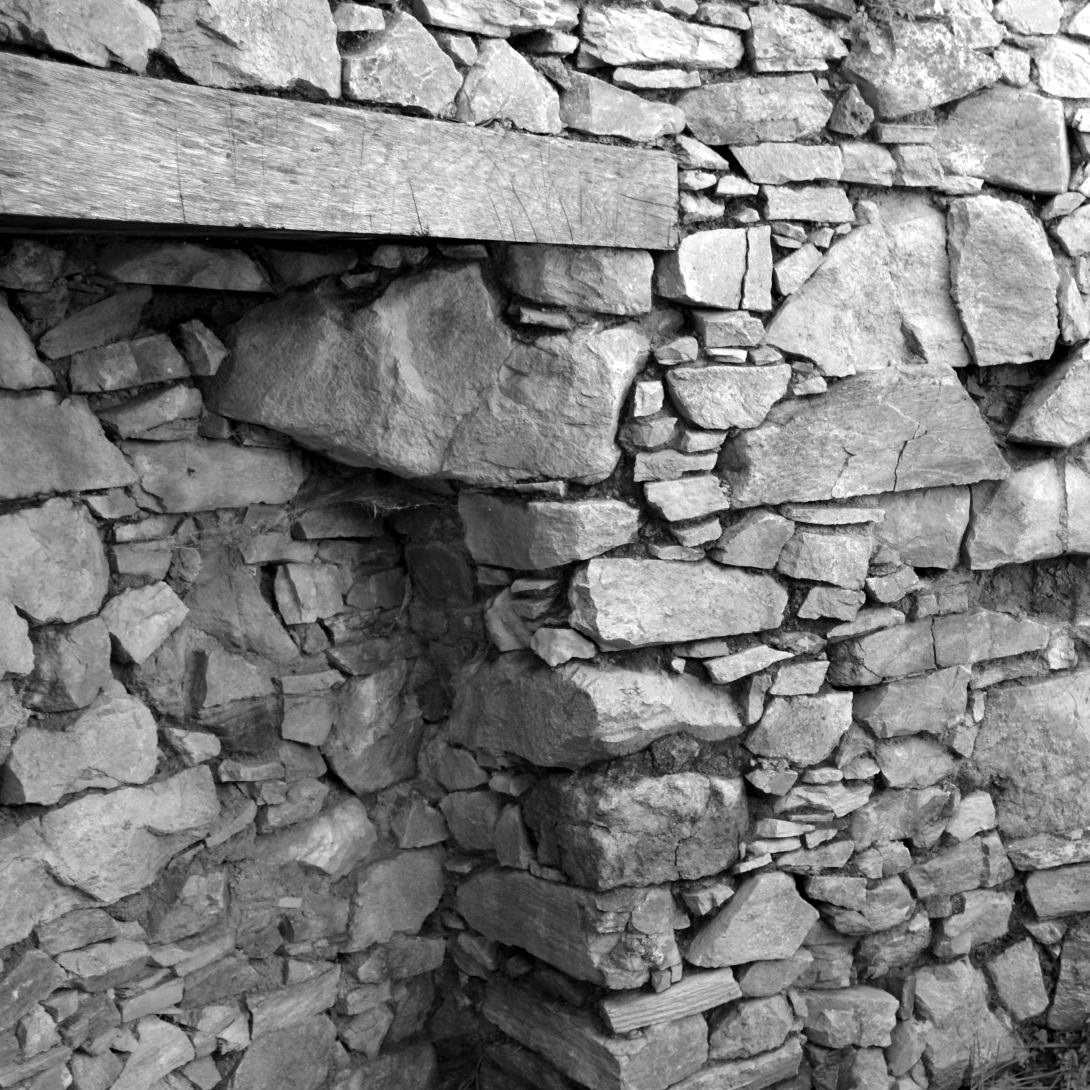 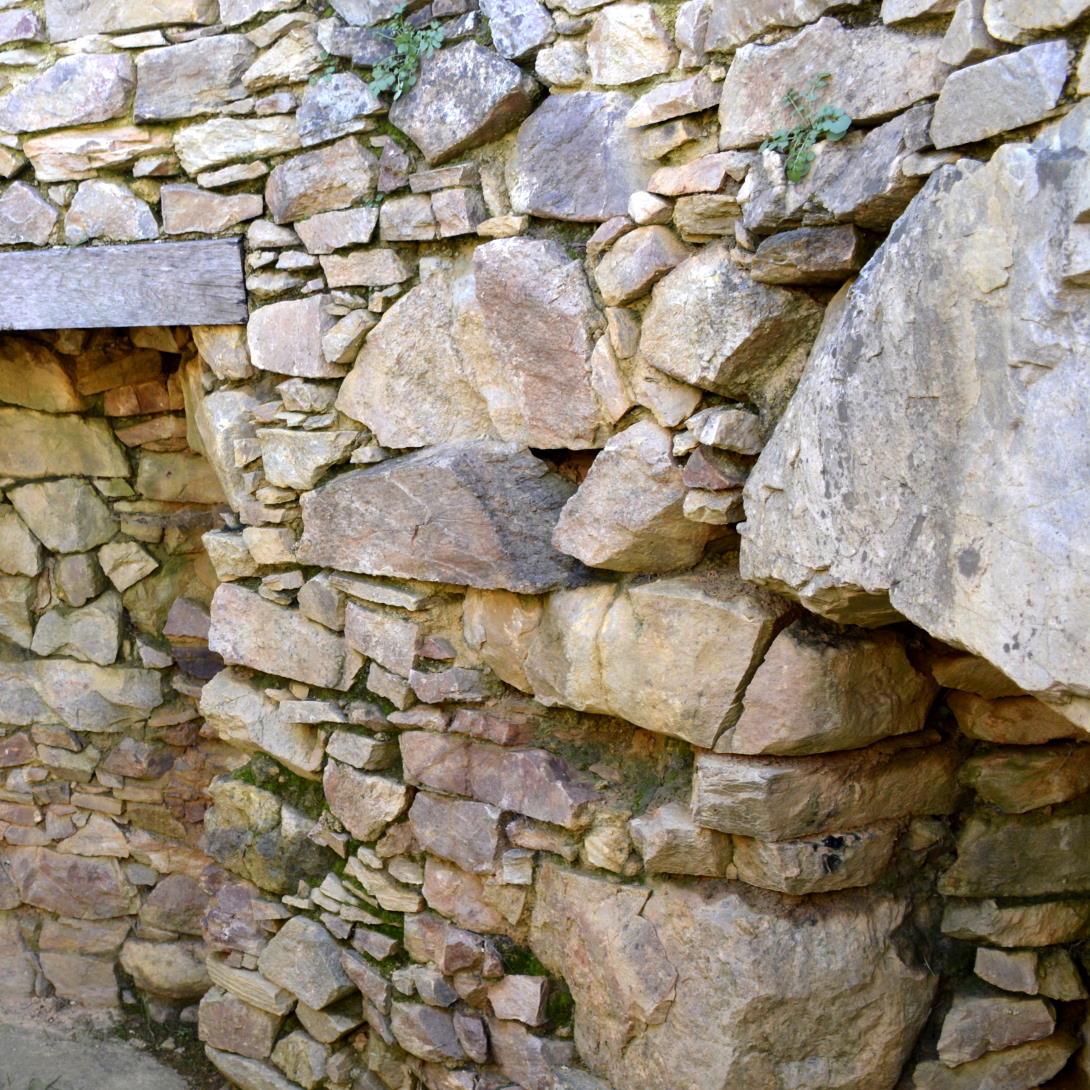 The skyline around the village of Sallertain once silhouetted fourteen windmills. Today, only the beautiful Moulin à Vent de Rairé remains. The families that have owned and operated this windmill through the centuries have kept it's heart beating continuously since 1555. It is the only windmill in France that has been in constant production, powered solely by the wind. Tours are offered from April, and the gift shop sells flour milled here according to tradition. The hamlet leading up to the windmill is equally charming. **HIGHLY RECOMMENDED. See website for schedule.

The hills of Pouzauges boast two windmills built in the 18th and the 19th century respectively. The miller has transformed the site into a place of learning and entertainment to please the entire family. A beautiful vista over the Vendéen countryside invites for a stroll around the pastures and mini-farm or participate in a treasure hunt. There are tours and demonstrations, and the bio flour produced here from local harvests is transformed into organic bread and brioches baked "sur place" in the wood oven. **HIGHLY RECOMMENDED with children.  See website for schedule.

The beautiful ridge just outside of the village forms a granite link between the geographical dichotomy as well as the history of the Vendée. Catholics and Protestants, Republicans and Royalists, Vendée Blanc and Vendée Bleue, have lived and fought at this location. While evidence of windmills dates back to the 15th century and possibly earlier, records show the original ones were burned down during the Vendée war. Anno 1852, after rebuilding took place, La Colline des Moulins counted 14 windmills, one of the largest concentrations in the Vendée, eight of which remain in various states of restoration or ruin. The hill is a protected historic site and classified as a Natural Area of ​​Ecological, Faunistic and Floristic Interest by the Ministry of the Environment. It is a gem of the bocage, and well worth a visit. From late April, discover the fantastic miller paths flanked by bluebells as well as a very rare and protected plant: the Silène de Bastard, and Silène vulgaris Bor. ssp. maritima var Bastardii. **HIGHLY RECOMMENDED for discovery, hiking or mountain-biking in the Vendée. See also our article In the Footsteps of Georges Clemenceau. 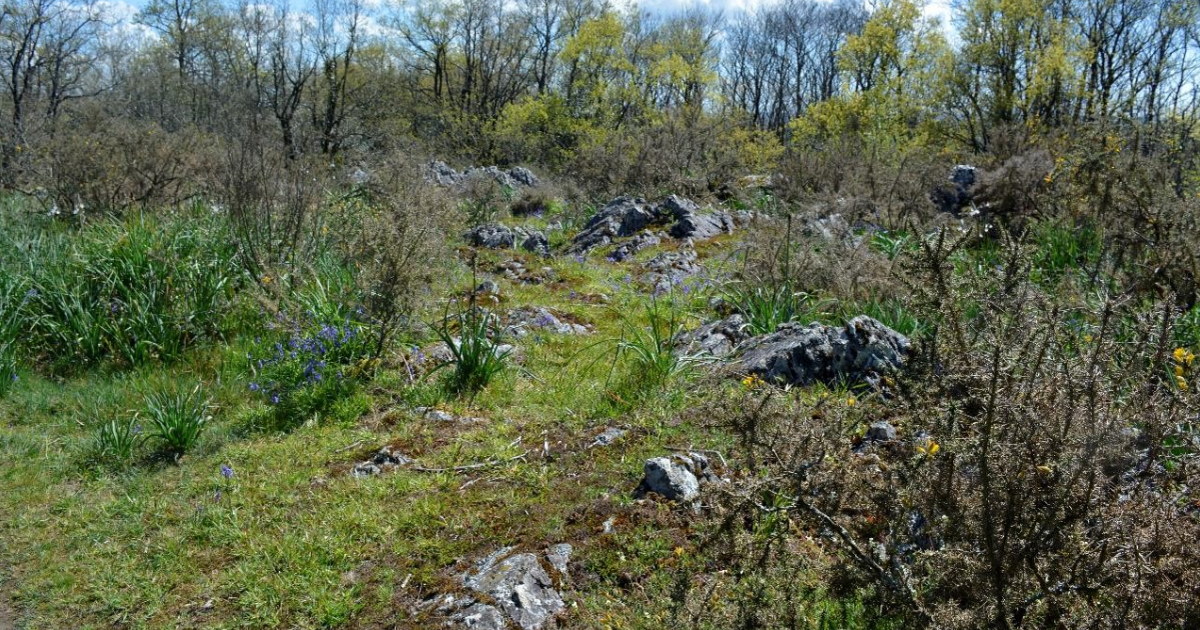 la colline des moulins in spring: unspoilt by the hands of time

Moulin des Rabouillères was also once known as the "Moulin Bots Piats" because Mr. Raynaud, the miller/owner, who wore flat (worn) clogs, was nicknamed "Bots Pias". At one time 15 windmills stood from west to east in the town of Longeville-sur-Mer. There are four remaining, of which the Rabouillères mill was the last in operation until 1962. The last miller here suffered greatly from the sleeping disease and one could always find him asleep on the job. Not always open, but a beautiful area to visit during Journées des Moulins and Journées Patrimoine when the current owner, a lovely French lady, offers free tours. It is an eco-property with gites and bio-garden, with many wildflowers. The windmill was lovingly restored, with workmen leaving their mark in the form of a small wooden horse as a surprise on the top floor. **WORTH VISITING

In a lovely garden that offers visitors an informative walk featuring an artistic look at how the wind can be observed through meteorological instruments sculptures, wind chimes, and sails, stands a windmill with an unusual canopy. The location is a fun excursion at any age, studying the wind through games as well as imaginative art pieces that were selected through a competition. The windmill rises from a dune at the edge of the village and the Atlantic ocean, offering beautiful views of the Vendée coast. Other windmills nearby include Moulin Jodet, Moulin du Bourg, Le Grand Moulin, Moulin du Jardin du Vent, Moulin de la Croix. See website for schedule and more information. 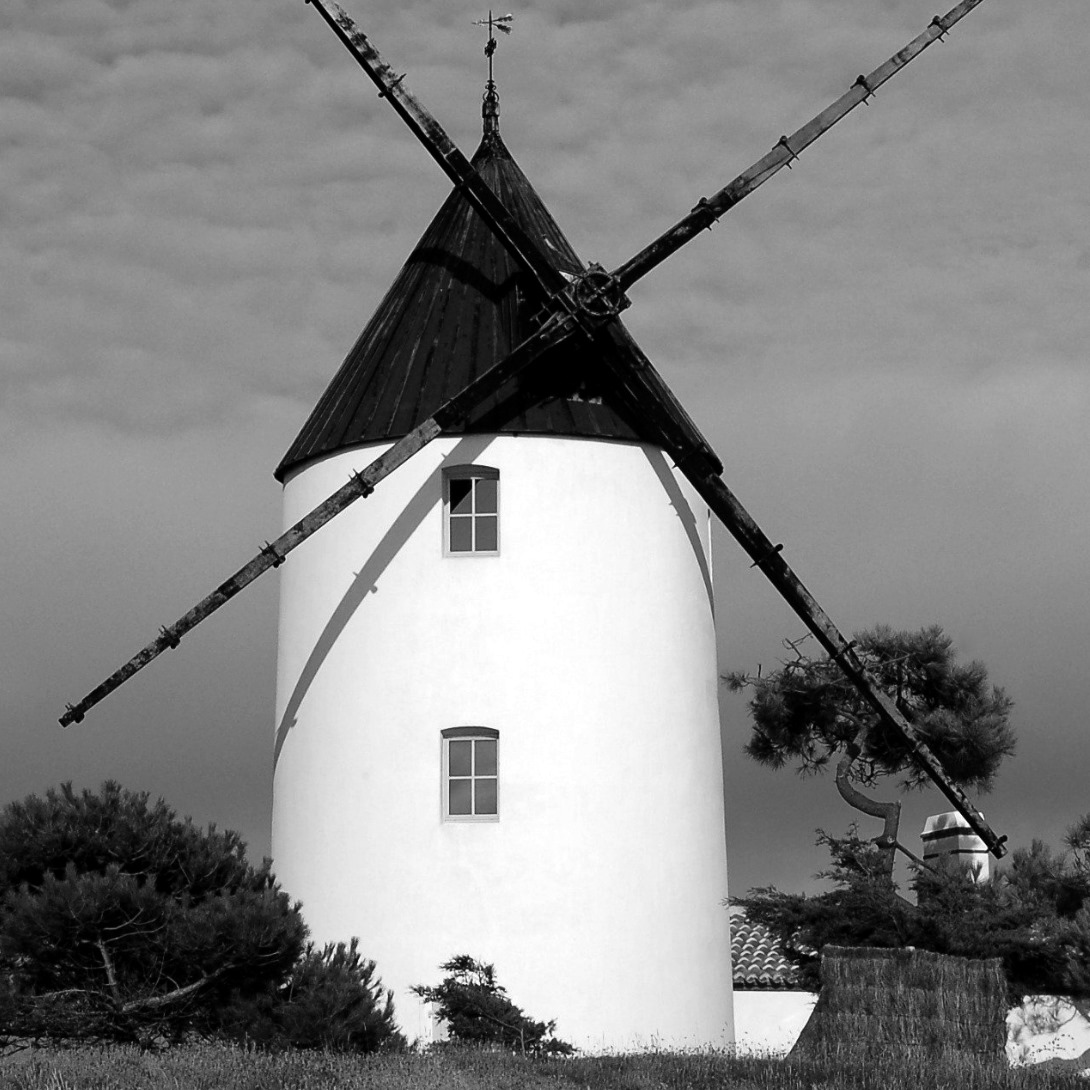 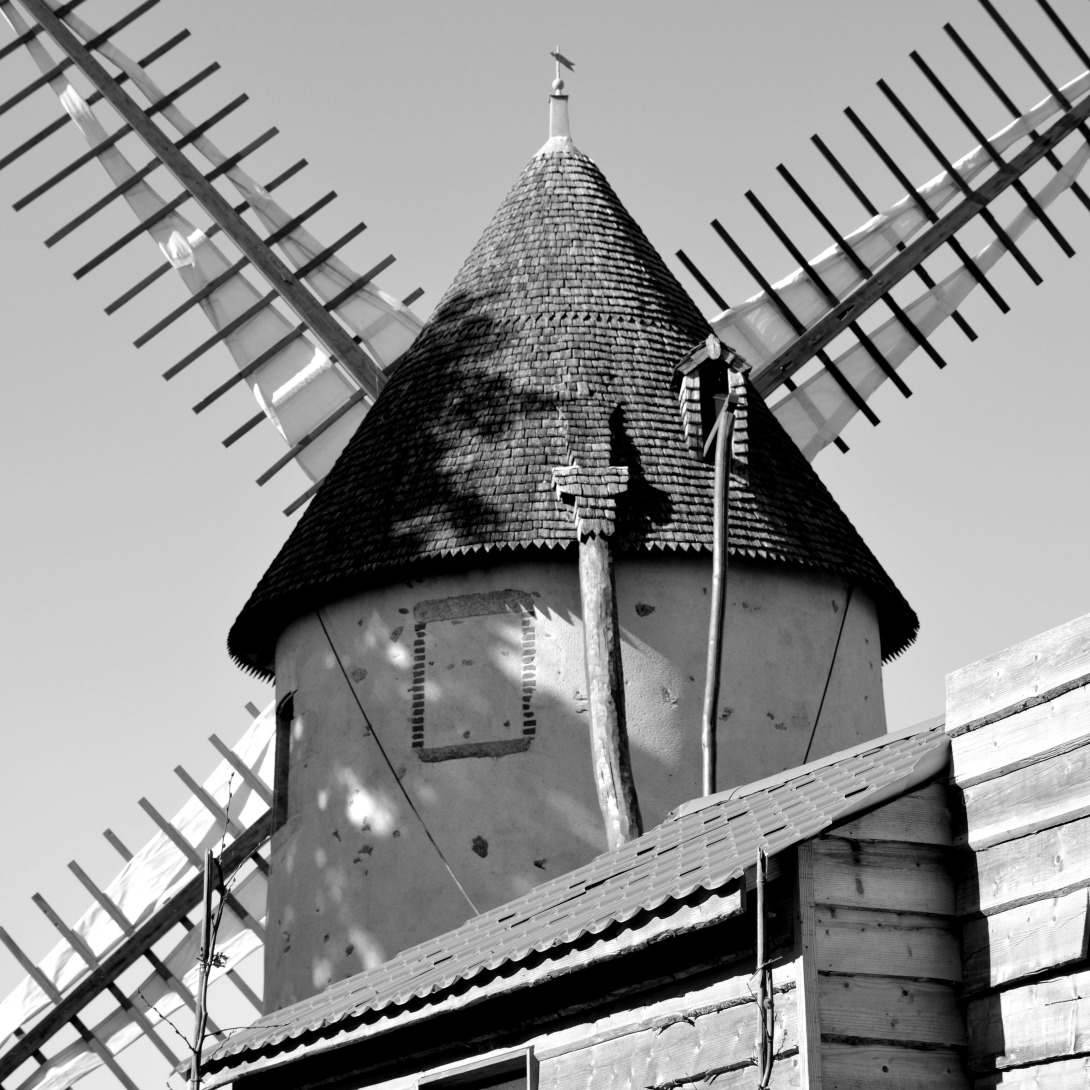 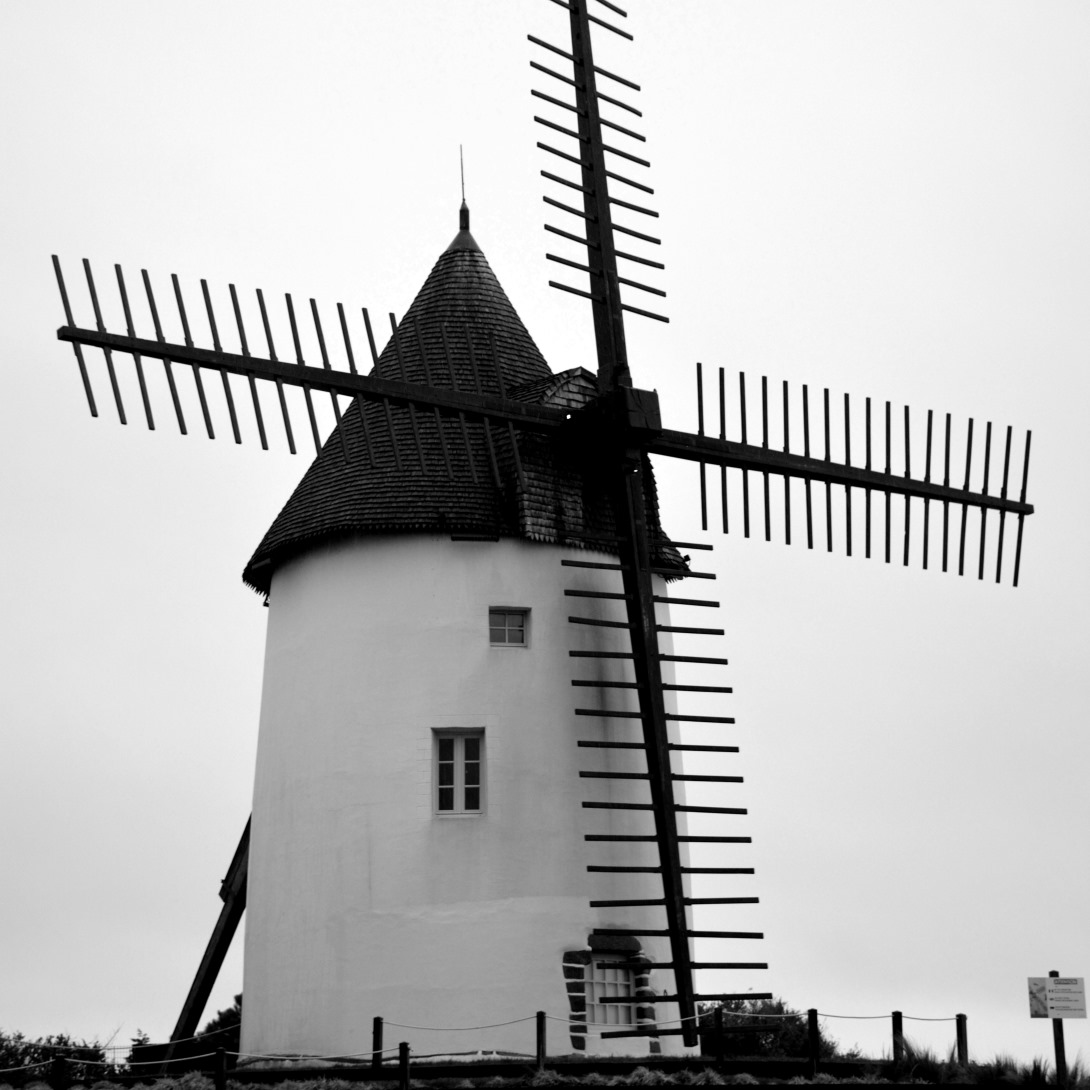 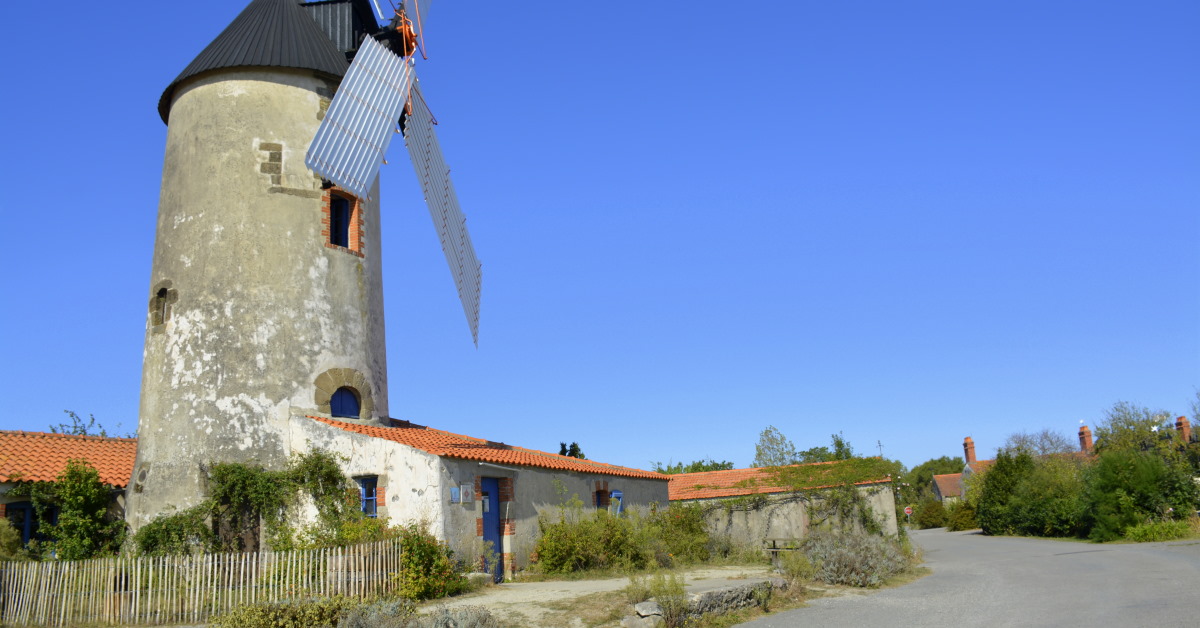 The Moulin de Rairé, in continuous production since 1555 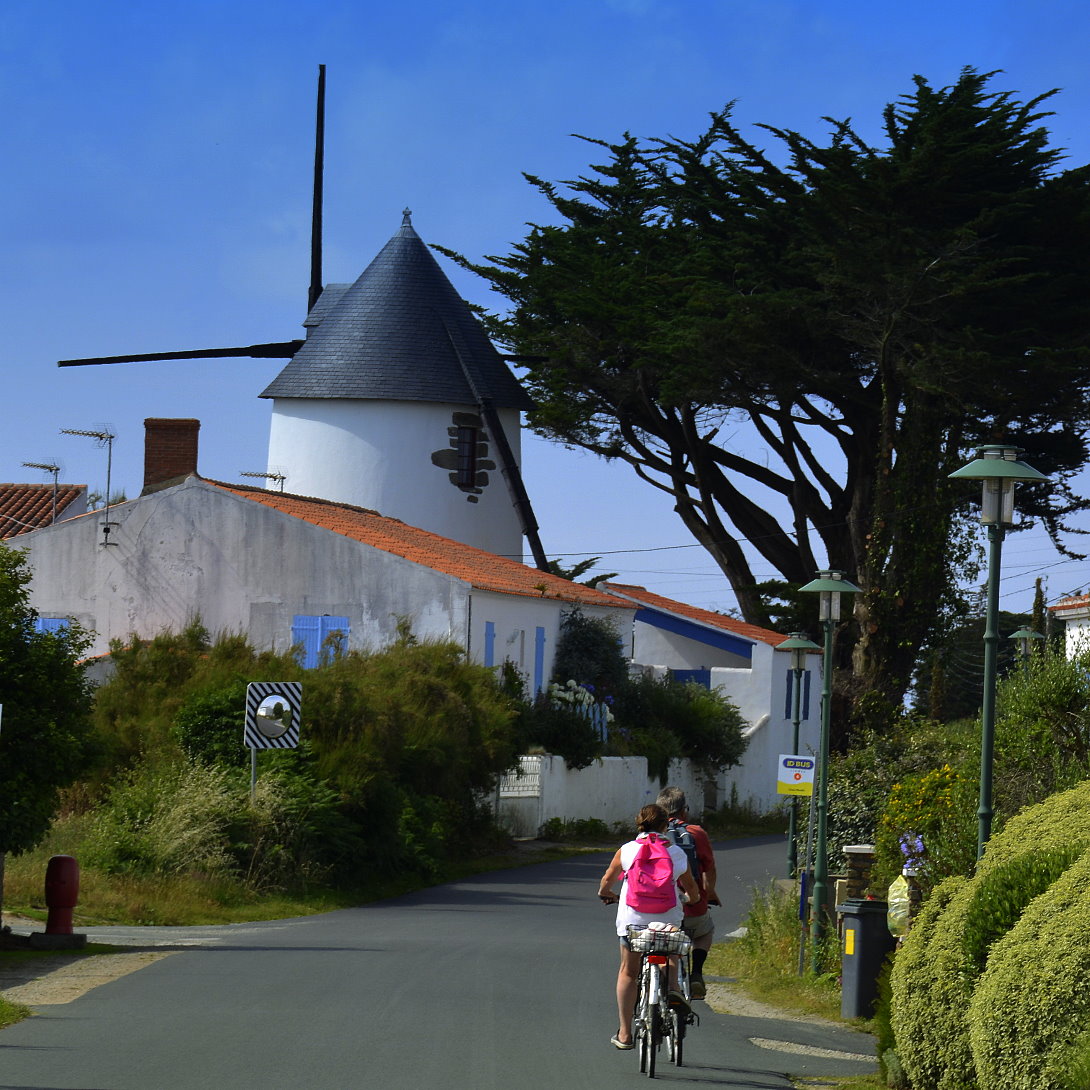 Island Windmills in the Vendée

This beautiful island off the Vendeen coast with its famous access road Le passage du Gois, is ideally situated to capture the winds from the Atlantic ocean. In the 19th century, as many as  32 windmills were operational here. A remarkable 23 windmills are still visible on the island today, only 4 of which are in ruin. Examples:

The archives show evidence of eighteen mills on the island of Ile d'Yeu. Today only a few remain, the oldest windmill being Moulin le Cassé (also called the Grand Windmill) located at the gate of Saint-Sauveur.

Route planning... or not?

Windmills have stories  – We leave you with the interesting tale of the Moulin de Conchette in Jard-sur-Mer. Legend goes this windmill was built at the end of the 19th century as a gift to a local boy miller who fought in war for three years in place of the son of a wealthy family. The transaction is said to have been that the miller boy, upon his return from the war, operated the mill which, from then on, belonged to him.

The impressive windmill is perched at the edge of the port in Jard-sur-Mer. Although it was restored, it is not open to the public but visiting the village and port, you definitely can't miss it. We thought the story of its existence speaks to the imagination. It is a sweet reminder that each and every one of the 207 windmills in beautiful Vendée has its own story.  It's up to us to go and discover them.

On route for Vendée sightseeing, it's fun to explore without too much planning. We suggest you pick a general direction or area to explore and let yourself be surprised by randomly following the signs for historical monuments. Being spontaneous allows us to travel deeper and capture the unexpected. Enjoy!

Images: all images snapped by inthevendee.com except the windmill Noirmoutier (Wikipedia)

Hidden Corners in the Vendée