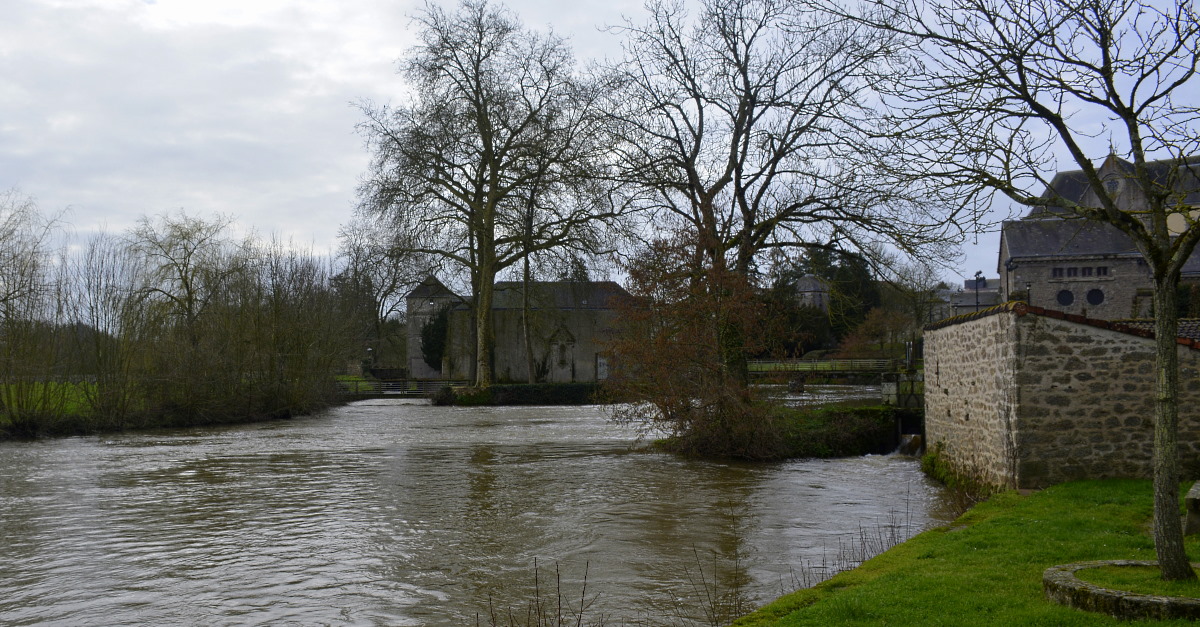 The beautiful Eiffel bridge across the Sevre-Nantaise river, is but one of many interesting historical monuments to see in the quaint village of Saint-Laurent-sur-Sèvre. We'll take you exploring some of them in this prequel to your own Vendée adventures.

I love my job! When through inthevendée.com's Facebook page and group our readers were invited by the tour guide students of Val de Sèvre Formation for an English language guided tour of the village known as the Holy city of Vendée, Saint-Laurent-sur-Sèvre, yours truly seized the opportunity to sneak away from her desk for a few hours. There's nothing like exploring another corner of France and the Vendée... and sharing it with the rest of the world.

Located idyllically on the banks of the Sèvre-Nantaise river, a tributary of the Loire, this is village ideal for a lovely stroll among French heritage. On the morning of the tour it was quite cloudy and chilly. While I can imagine the village bursting with flowers late spring through fall, the display of history set against the moody skies of a winter landscape worked its charm.

Like most of the Poitou area, evidence shows there were settlements here since prehistoric times. After a Gaelic period, the Romans settled here from around the 5th Century AD. Christianity followed with the first parish called Saint-Pierre-de-Savara. Later, when word spread that the village was safeguarding a piece of the thumb of Saint Laurent, the village became a pilgrimage. In early 11th century, following five centuries of Roman influences, a church was erected in Saint Laurent's name and the village was renamed Saint-Laurent-sur-Sèvre.

The term Holy City of Vendée was cemented by two more important figures in French and Vendéen history: Louis-Marie Grignion de Montfort (1673–1716) and Marie Louise Trichet (1684–1759). The two met in Poitiers while Father Montfort was Chaplain at the General Hospital for the poor and sick. They had devoted their lives to this cause and to the Blessed Virgin Mar. In 1703 (before Montfort left Poitiers, leaving Marie-Louise in charge), they formed the Rule of the Daughters of Wisdom, a female congregation of which she was the first member. Their mission expanded to teaching and education for the poor under guidance of Montfort.

Appointed apostolic missionary he preached across a wide area of France. His travels also brought him to Saint-Laurent-sur-Sevre where he died on 28th April, 1716.  In 1720, Marie Louise Trichet established a Mother House in the village (Maison Longue, still a museum devoted to her life and the Daughters of Wisdom). She died here on 28th April, 1759. In death, the spiritual soulmates lie buried side-by-side as the Blessed Marie-Louise and Saint Louis-Marie Grignion de Montfort in the basilica.

Our suggestion for a day trip – 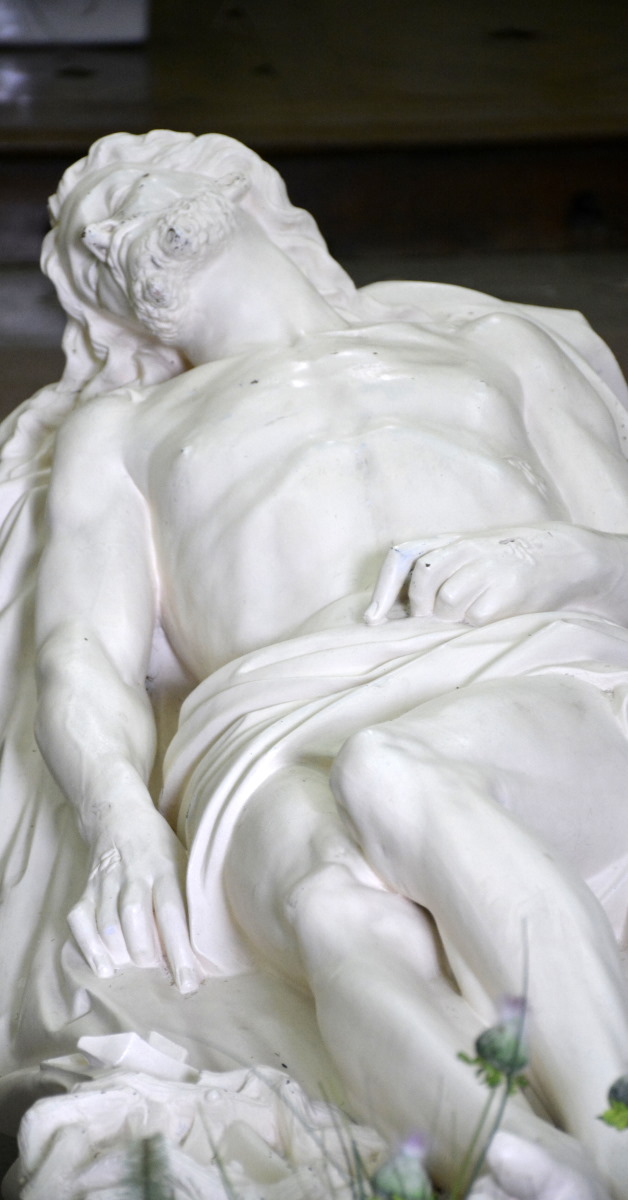 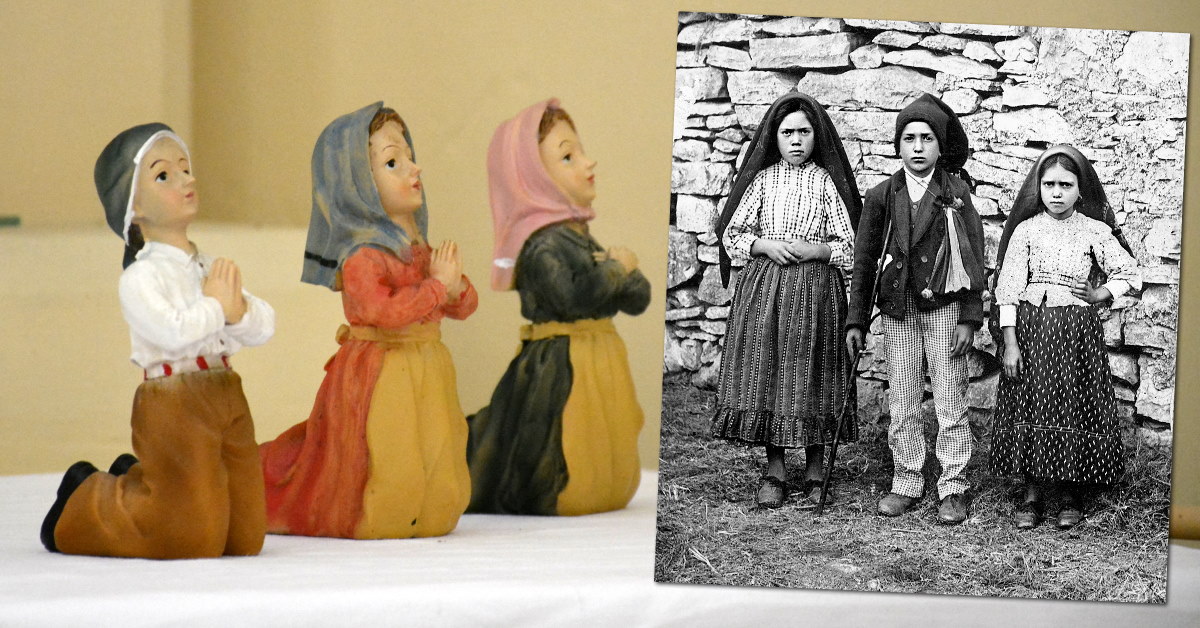 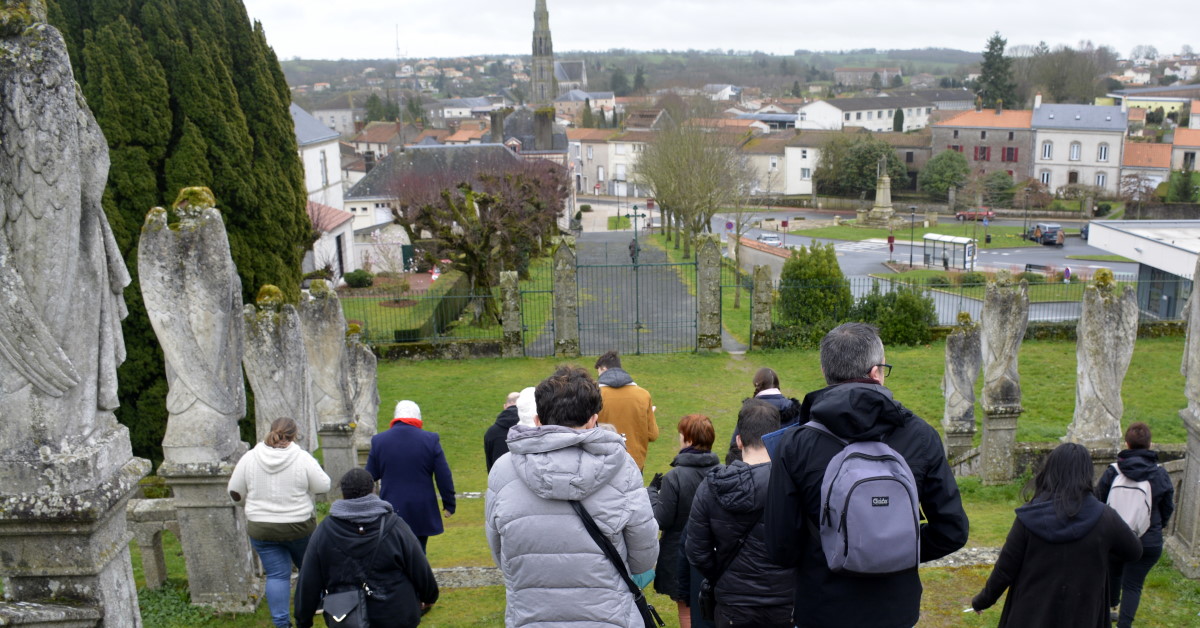 The original Calvère constructed in honour of Montfort during his time of preaching in the village, was located in what, anno 2020, is now the car-park just below the monument. It was much smaller at the time, and sadly inaugurated just one day after the death of Père de Montfort, in 1716.

By influence of the parishioners, the monument was demolished and replaced by a much larger, semicircular one. Elements of the original cross can be viewed in the Basilica where Montfort is buried.

From 1842, the new Calvary rises to the heavens in three circular terraces, representing the Holy Trinity. Its 33 steps represent the age of Jesus Christ. The stairs are flanked by twelve life-sized sculptures of angels, each holding a relic of Jesus' suffering during ascension of the mound towards his Crucifixion.

The cross stands atop a granite structure, in fact, the entire monument is hewed from granite. Beyond stands the chapel of the Passion, built in 1873 by architect Fraboulet and dedicated to Blessed Virgin Mary, Our Lady of Fátima of the famed Marian apparitions in 1917 when three shepherd children (Lúcia dos Santos and her little cousins Francisco and Jacinta Marto see image), reported the Virgin Mary appear to them.

Tiny statues commemorate them atop the altar in the chapel which was opened to us on the occasion of our tour. A large white marble statue of Jesus after the Crucifixion graces the center of the chapel.

GPS location – 46.958876, -0.895013
Parking – free parking
Restaurants – cafe, restaurants and bakeries in the village center (walking distance)
Next – walk towards Ecole Saint-Gab, towards the center on the main road.
Images – by inthevendee except for the image of the real Children of Fátima by Joshua Benoliel 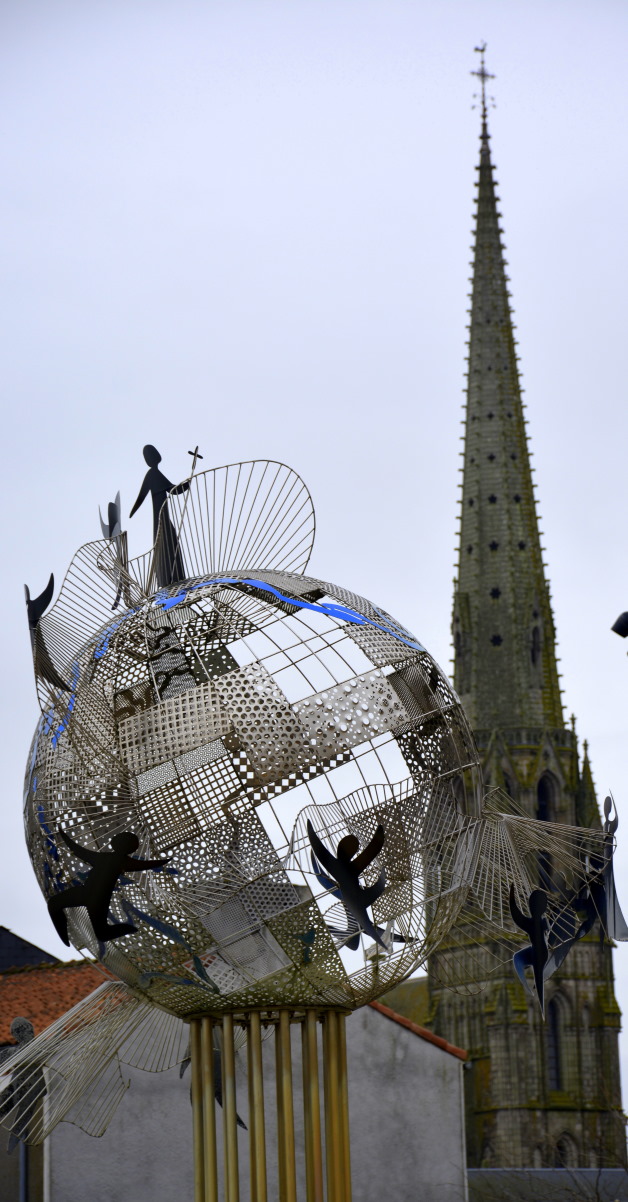 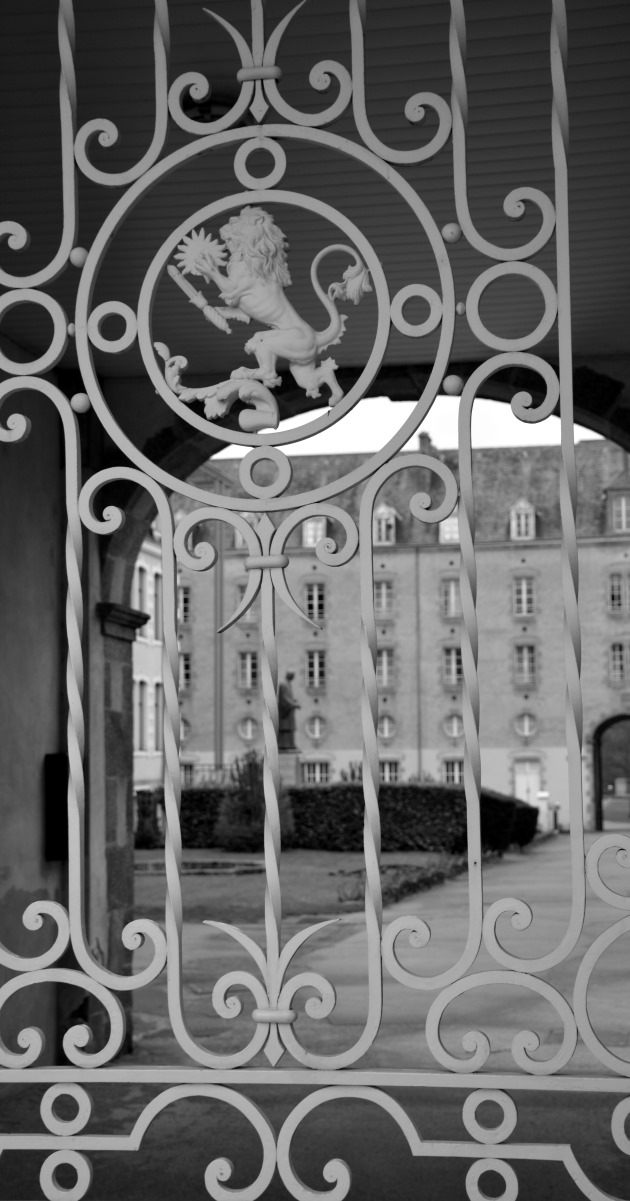 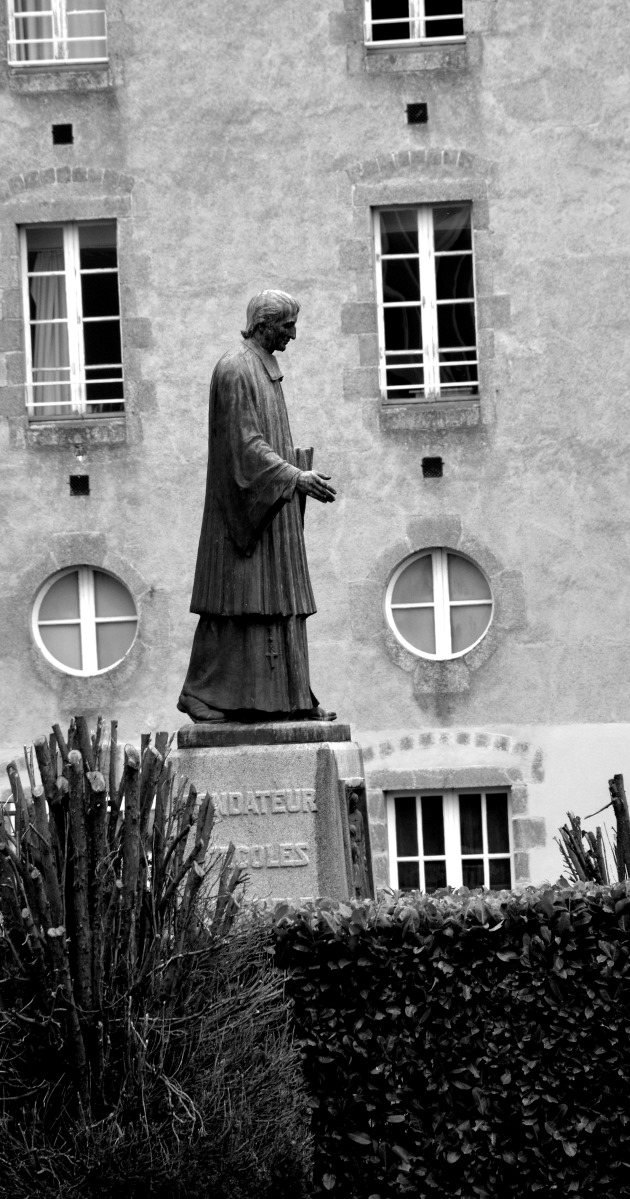 Just 500 meters from the monument following the main street towards the village center, the school known as Saint Gab is located on the left. The enormity of this campus is quite surprising. On the steps of the school you are greeted by a poignant sculpture unveiled in 2013: our globe surrounded by children following in the footsteps of their spiritual leaders Montfort and Trichet, depicting the scattering of the Congregation of the Brothers of Saint-Gabriel and the Daughters of Wisdom across the world.

Historically there were two schools, Saint Gabriel for boys and Saint Michel for girls, but they have since been combined into one. Anno 2020, more than 1800 students, local as well as hailing from around France and the world receive an education here. It is one of the largest (boarding) schools in France.

The schools were established to follow the Montfortian teachings, spiritual experience, and missionary of Saint Louis-Marie Grignion de Montfort and that of the Blessed Marie-Louise Trichet, as transmitted by the Brothers of Saint Gabriel and the Daughters of Wisdom. 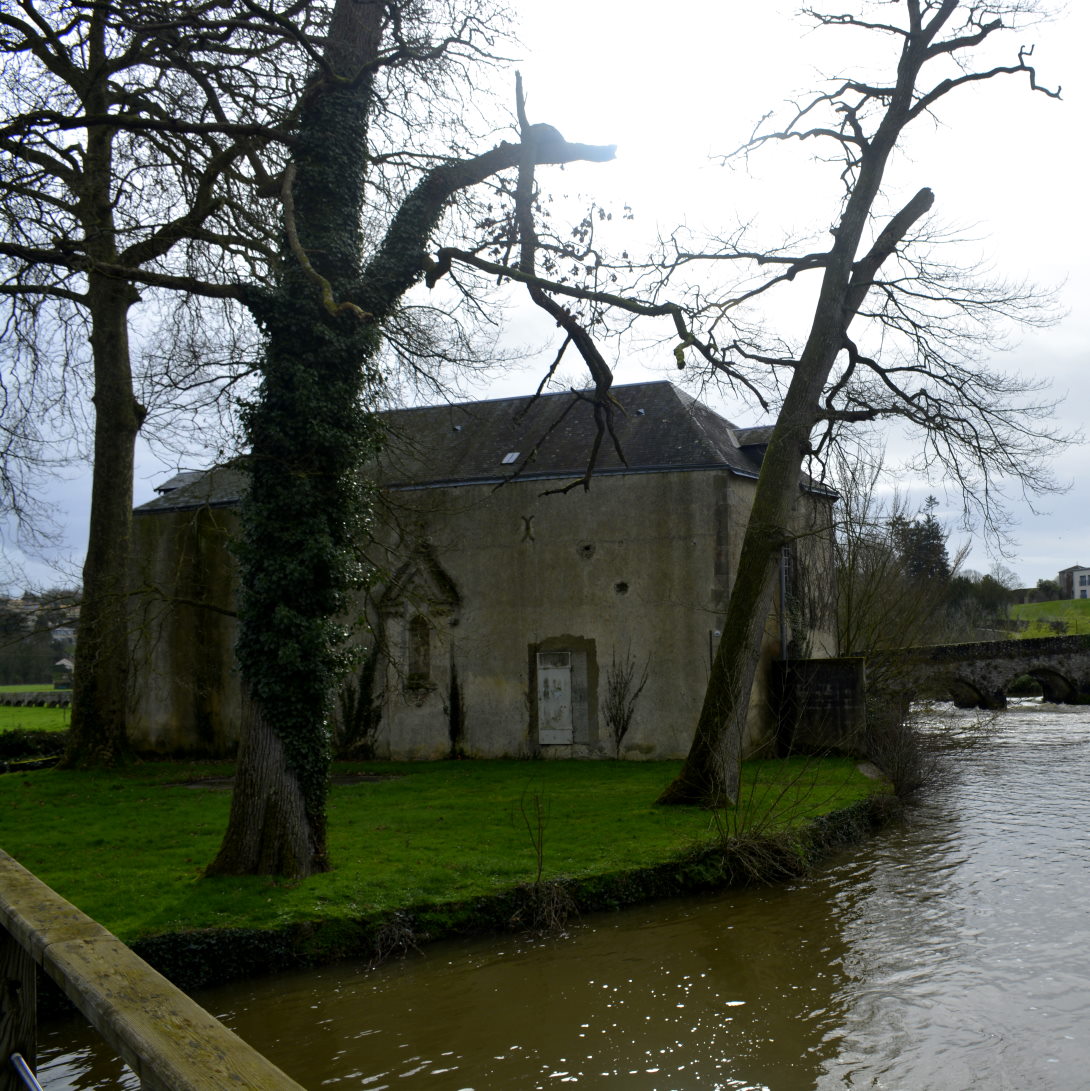 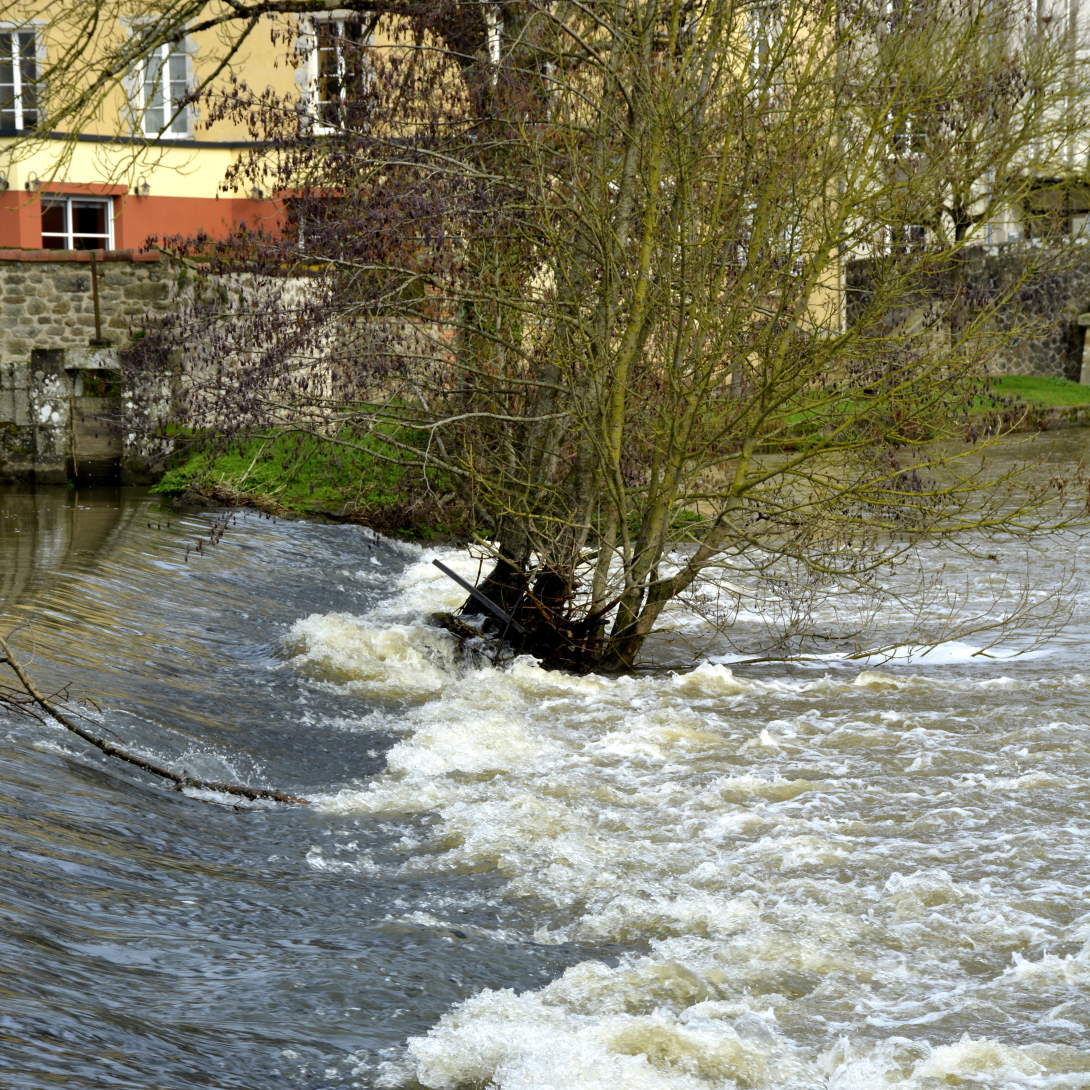 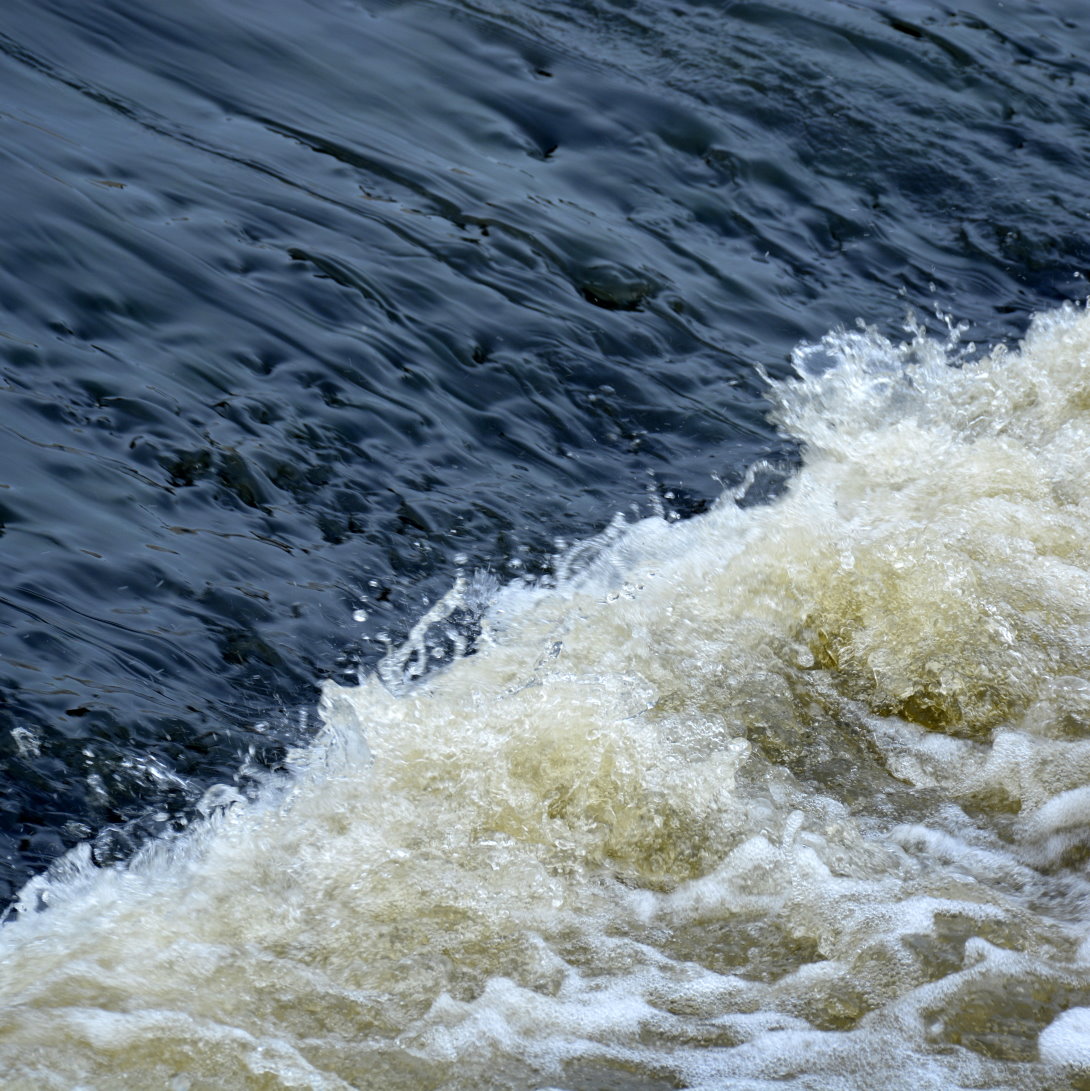 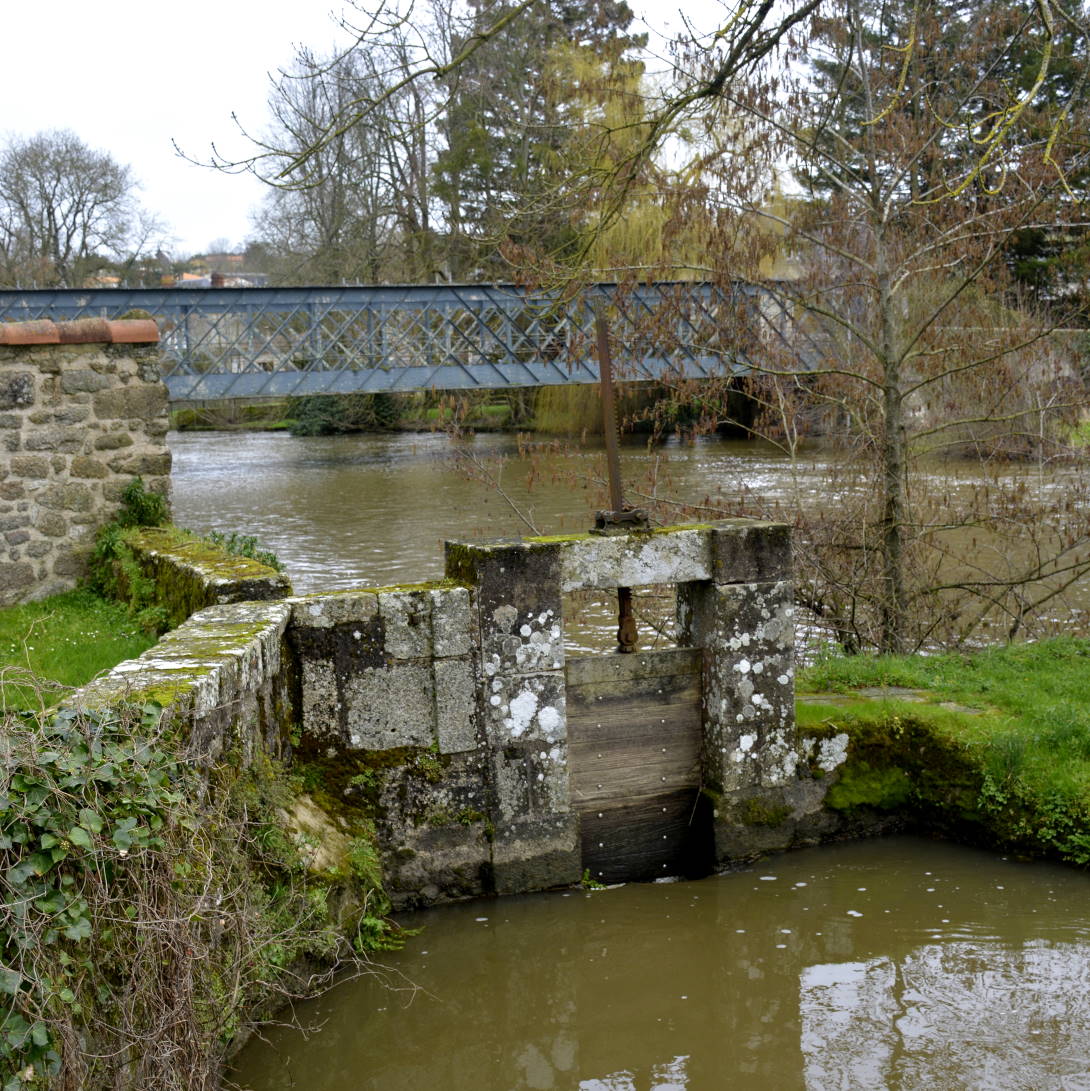 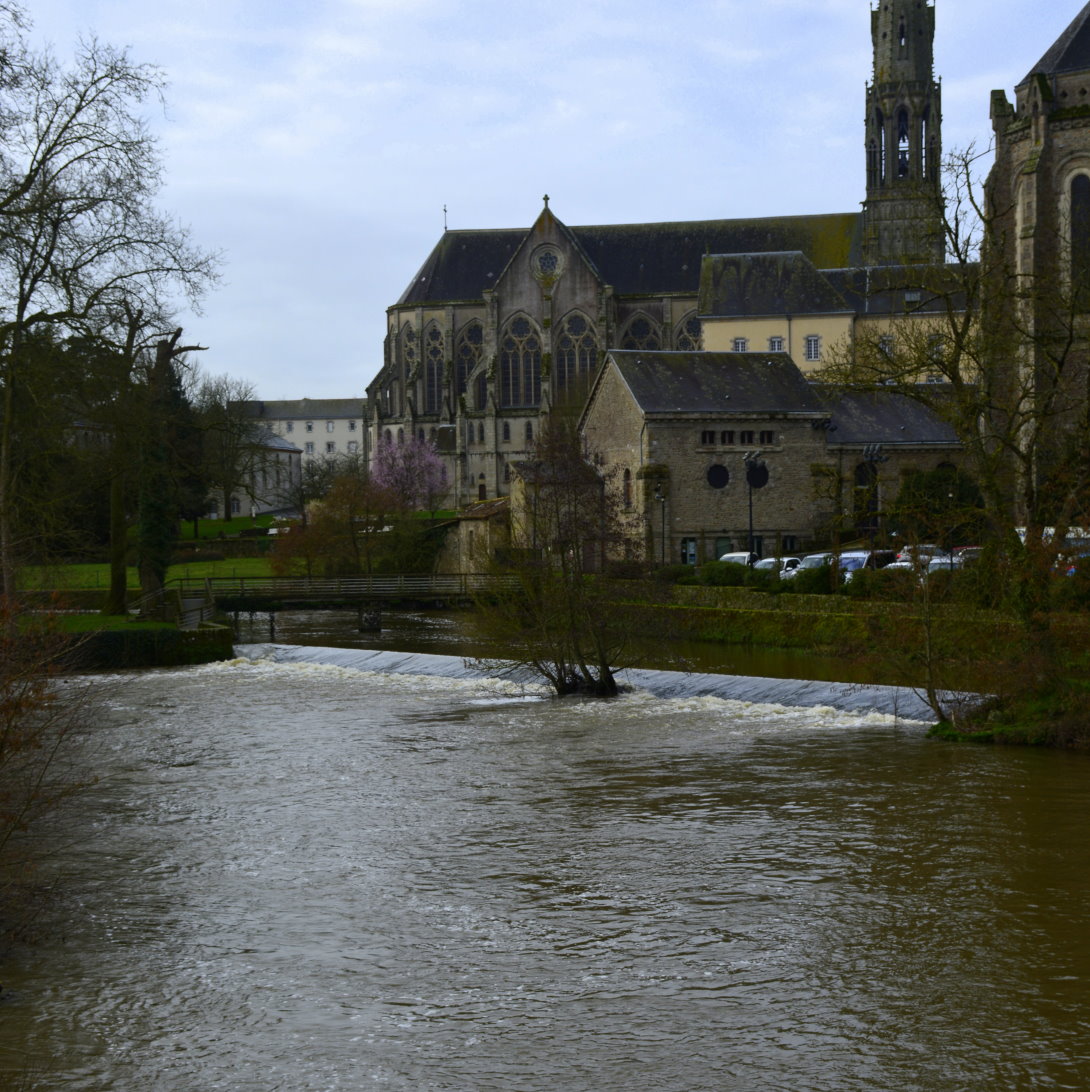 On the picturesque grounds of the Community of the Sisters of Wisdom and the river stood an ancient mill, inoperative and in decline since the 16th century. Father Deshayes, superior of the Montfortian communities, had a new mill built.

The mill was to produce "4,000 loaves of bread per week of which 700 were to be distributed to the poor."

Originally it had a paddle wheel which operated three pairs of millstones. Then a system of pit wheel and flywheels was used to transmit the movement of the waterwheel to the rotating millstones.

The river was a hive of activity in bygone centuries. The low-built aquaduct is still used for irrigating the fields around the village.  There were watering places, fisheries and wash houses. One of these 'lavoirs' is still in place.

Everybody could use the lavoirs, rich people as well as the poor. Payment was demanded according to income and the maid-servants of the richest families had the best spots around the lavoir. The poor paid nothing, but they were given the worst spots. 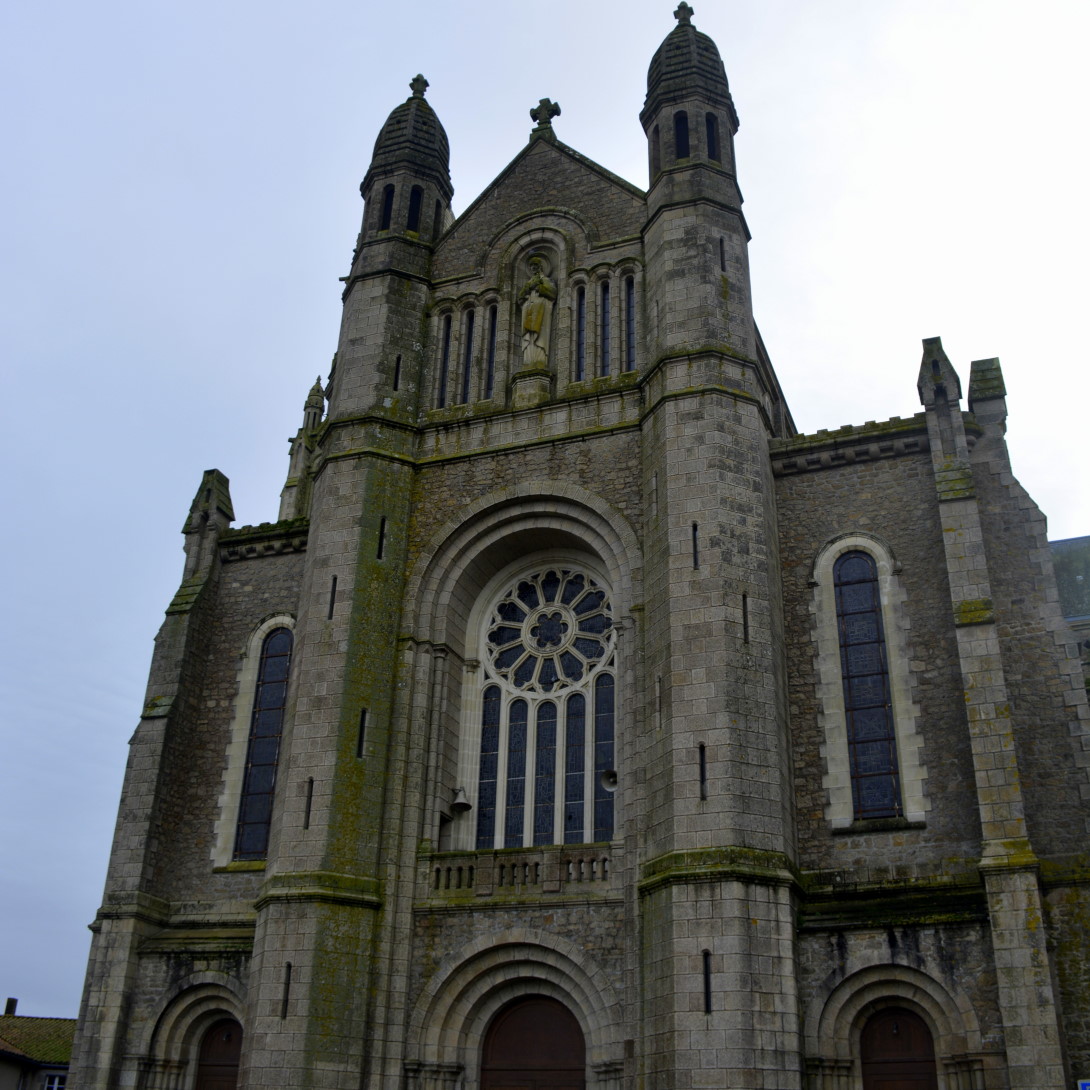 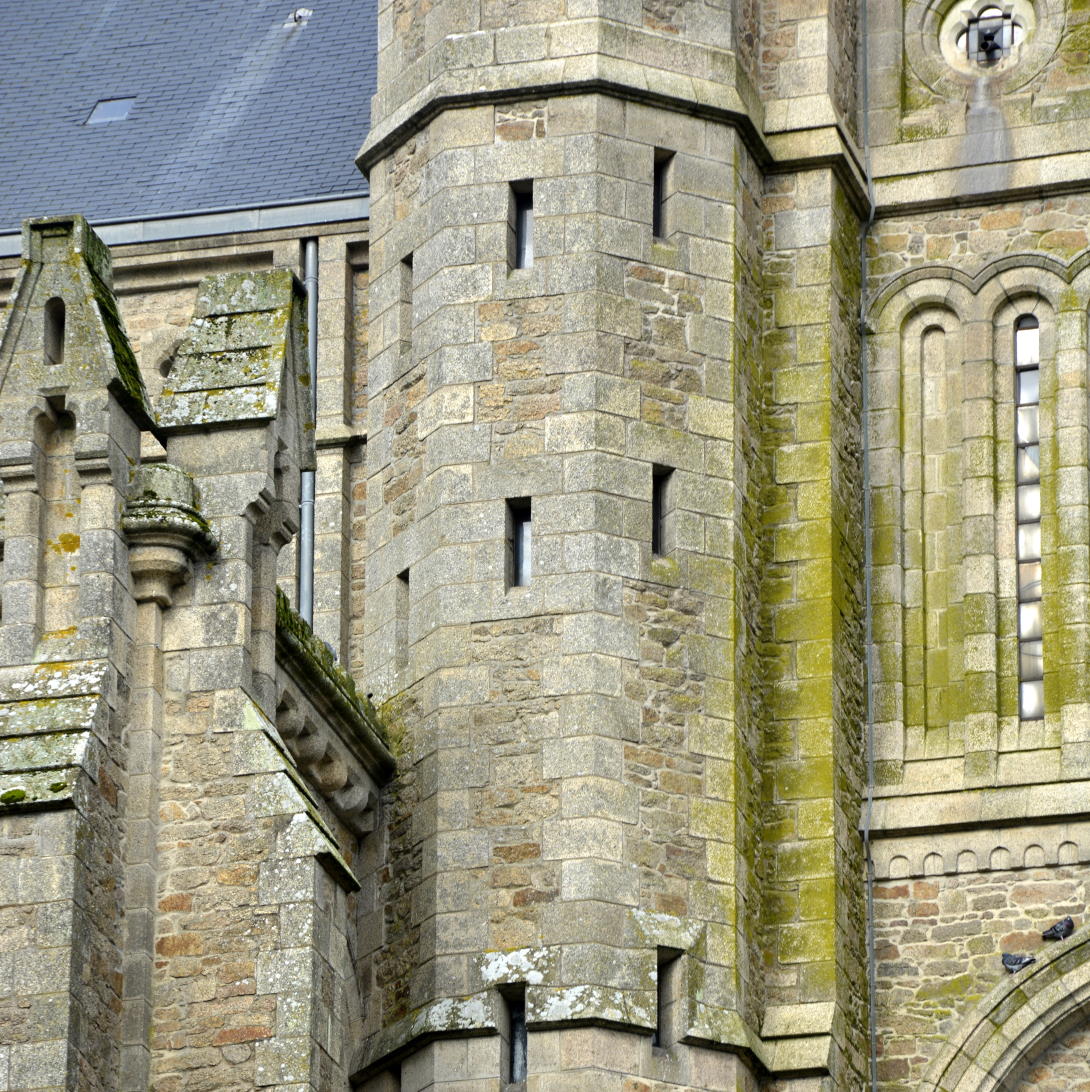 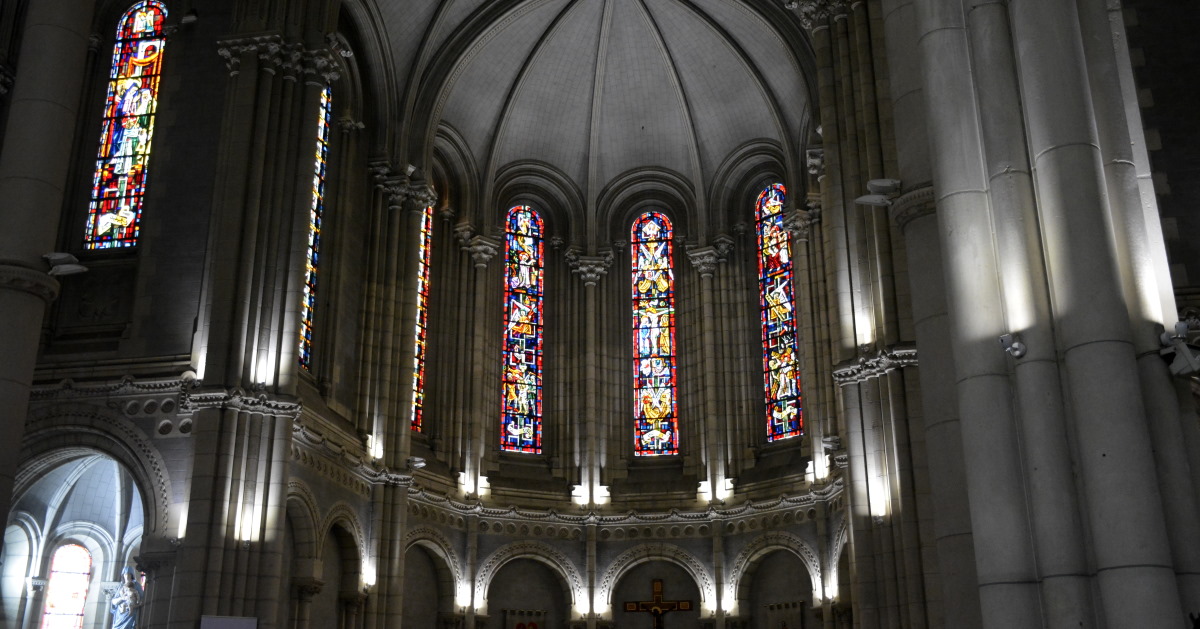 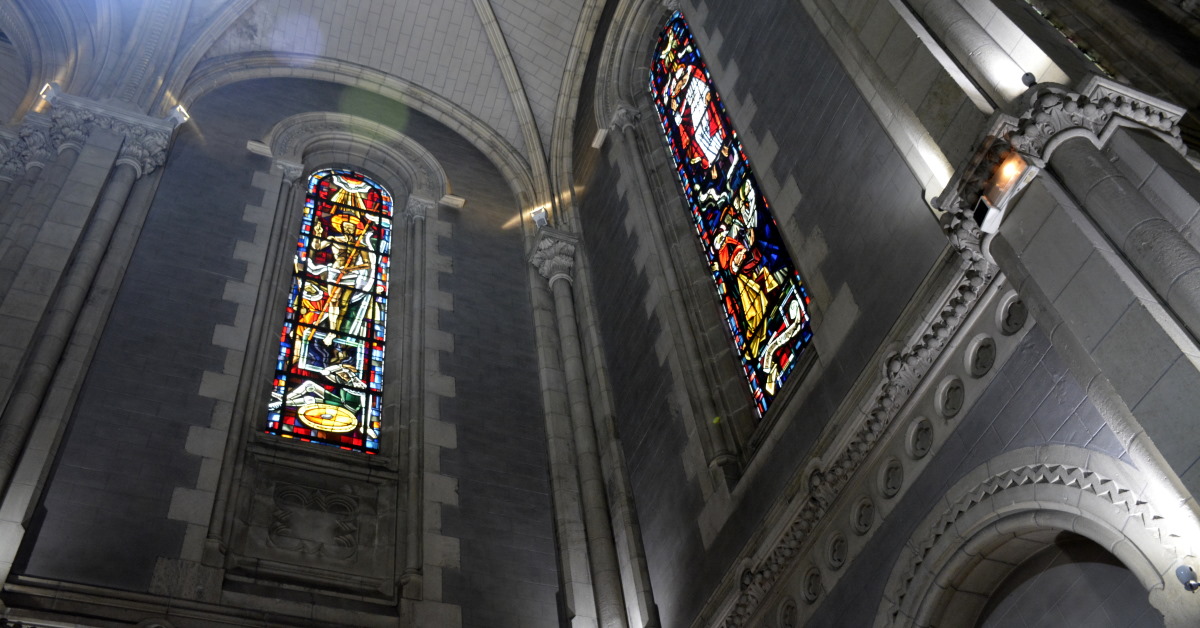 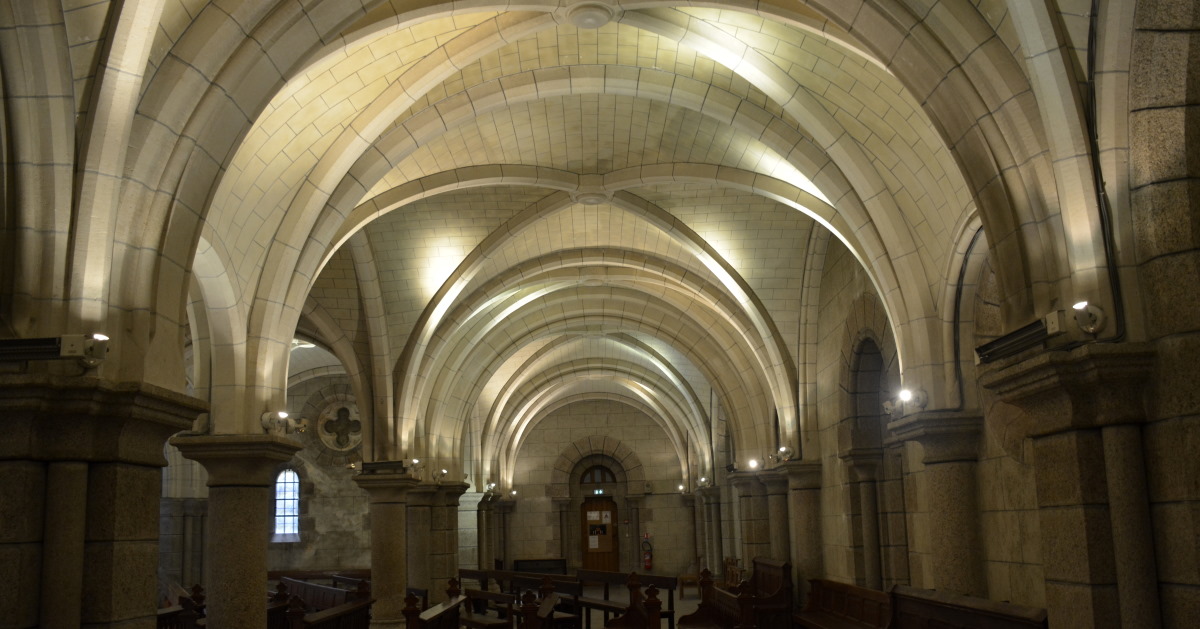 In 1888 the ancient church of Saint-Laurent (11th century) was dismantled to be replaced by the current basilica, the original plans of which were drawn to be a much bigger church. By 1892, crypt, apse, transept and bell tower were completed. In the next decades, two world wars and a lack of funding proved difficult to continue the construction. The basilica was completed in 1949, and consecrated in August 1963.

As the burial site of Saint-Louis-Marie Grignion de Montfort and the Blessed Marie-Louise Trichet, the basilica continues to draw thousands of pilgrims each year. Having followed the Montfortian teachings since his childhood, Pope John-Paul II came to Montfort's basilica to pray and meditate on his tomb in September 1996. It is custom to kiss the tomb.

There are so many treasures and artifacts to discover in this church from beautiful stained glass windows, to the chair JPII used during his pilgrimage and a small sculpture of him...

.... a beautiful statue of Jean of Arc (Jeanne D'Arc), the vast crypt beneath the nave with a sculpture of the dying Pere de Montfort. This, the tomb and other treasures were moved from the old church to be placed in the new church.

We marvel at the treasures hiding within our Vendée villages!

The village lends itself to a languid walk and is relatively flat, but it can prove strenuous. Wheelchair friendly except for the Grand Calvère du Père de Montfort (33 stair steps to the top.) There are ample car parks to drive from one monument to the other if that helps.

Take advantage of the free village tours given by the Val de Sevre Formation tour guide students. Yours truly did and had so much fun with them exploring some of the beautiful treasures and the heritage of this village. We will post any tour invitations we receive from the school in future, to our Facebook group.

Discover the Story of a Professional Vendée Tour Guide & Historian