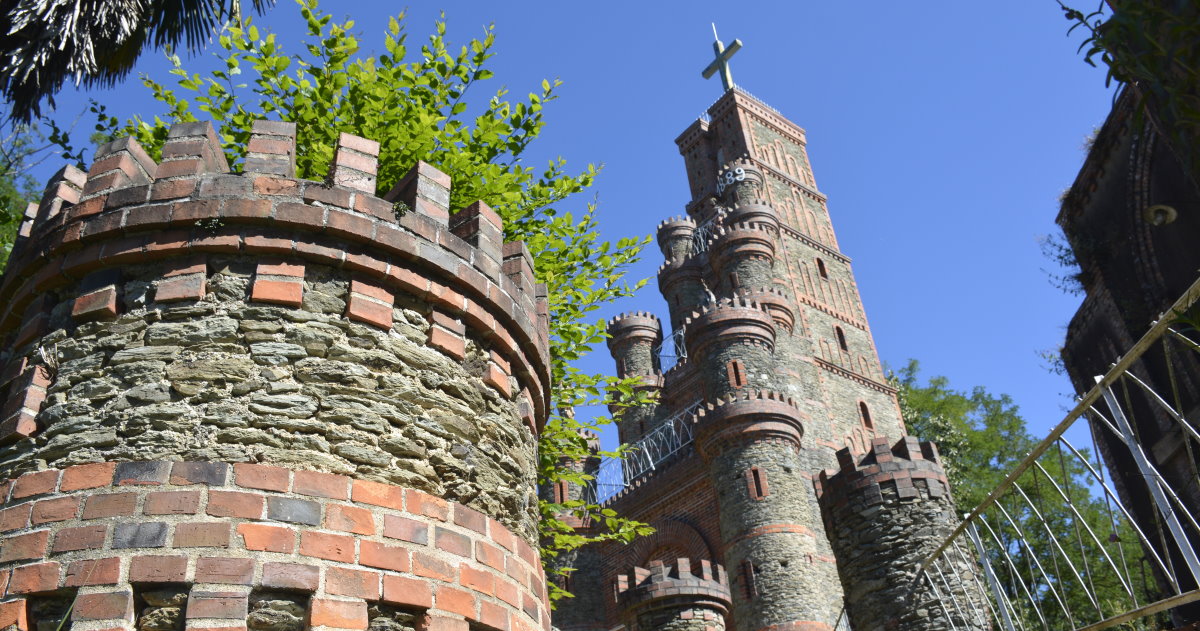 From the banks of the river la Petite Meine rises a very steep hill covered with lush foliage, wildflowers, and exotic species of trees. This beautiful environment in the middle of nowhere in the Vendeen countryside is home to a monument of remarkable architecture; a place of pilgrimage that draws a crowd each first Sunday of September but is a quiet spot of tranquility and reflection the rest of year: the Sanctuary of La Salette at La Rabateliere. It is a grouping of religious buildings commemorating  the apparition of the Virgin Mary to two children in the French Alps anno 1846.

History and location  – The sanctuary was built in 1887 at the initiative of Abbot Hillairet, then parish priest of the small village La Rabatelière. The land belonged to the Count of La Poëze who then owned and lived in Château de La Rabatelière (which is today a bed and breakfast owned by the Montassier family).

The species of trees covering the hillside and embellishing processional paths range from majestic Himalayan cedars, the Pinus nigra or black pine trees, boxwood hedges, flowerbeds and also exotic plants like yuccas and palm trees, junipers crawling, and more, all of which adds to the serenity and mysticism of the location.

The work was part of a religious response to the anti-clerical policies that dominated in France after 1879. Not much is known about the building style, only that construction was directed by the priest Élie Hillairet and carried out in local slate and brick, with with the help of  local parishioners and businesses. The architecture suggests perhaps a heavenly image to Jerusalem, and at the end of the 19th century, the Romantic movement as well as the Middle Ages were quite revered.

The sanctuary begins at the gates down below, developing as you zig-zag up the hillside in scenes depicting the three  apparitions of the Virgin Mary to two shepherd children, in the Dauphiné Alps outside the village of La Salette-Fallavaux, in 1846. This portion was inaugurated in 1888.

The three separate structures of the sanctuary consist of a monument dedicated to Our Lady of La Salette, the rosary wall and its tower, and the chapel dedicated to the Cross of Jerusalem 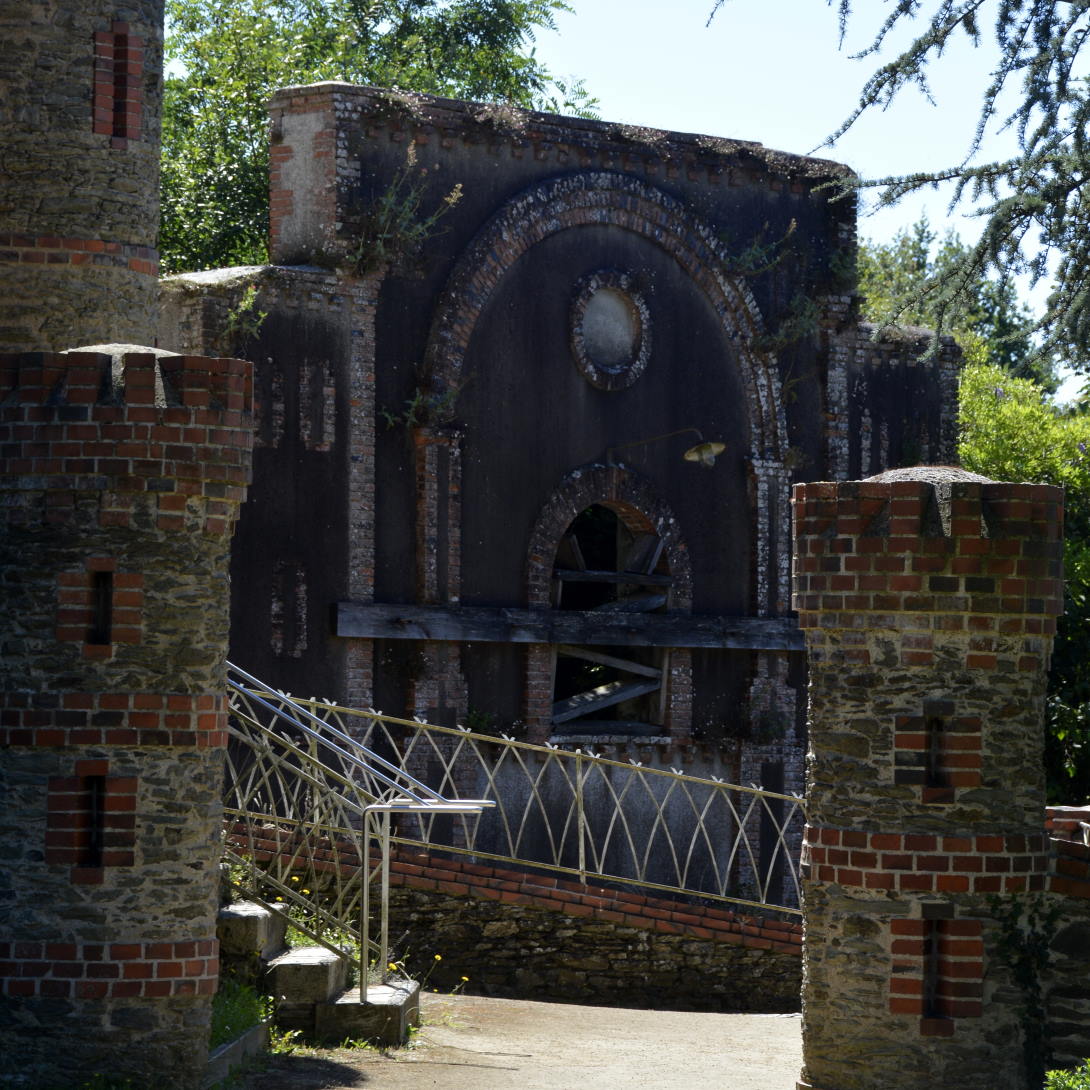 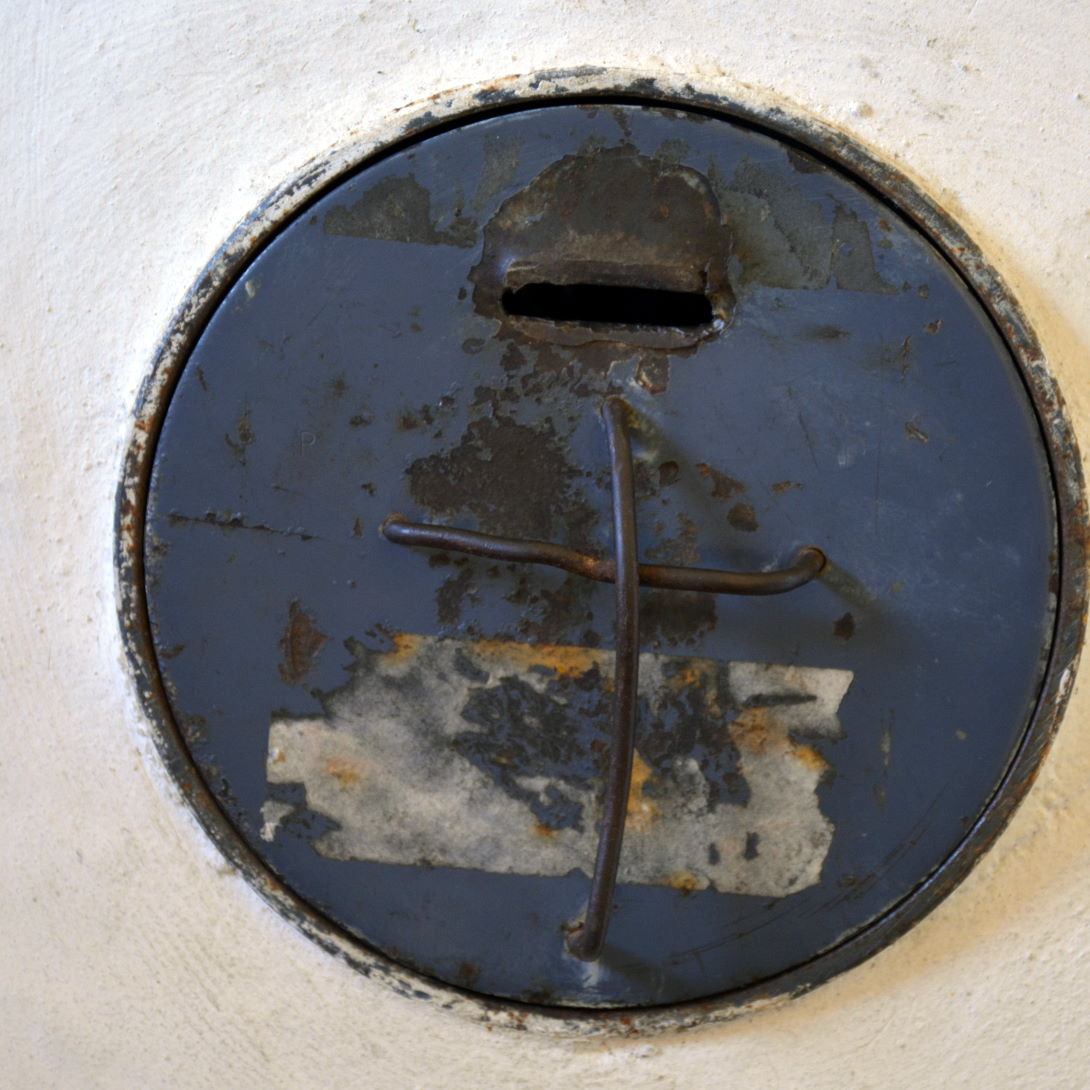 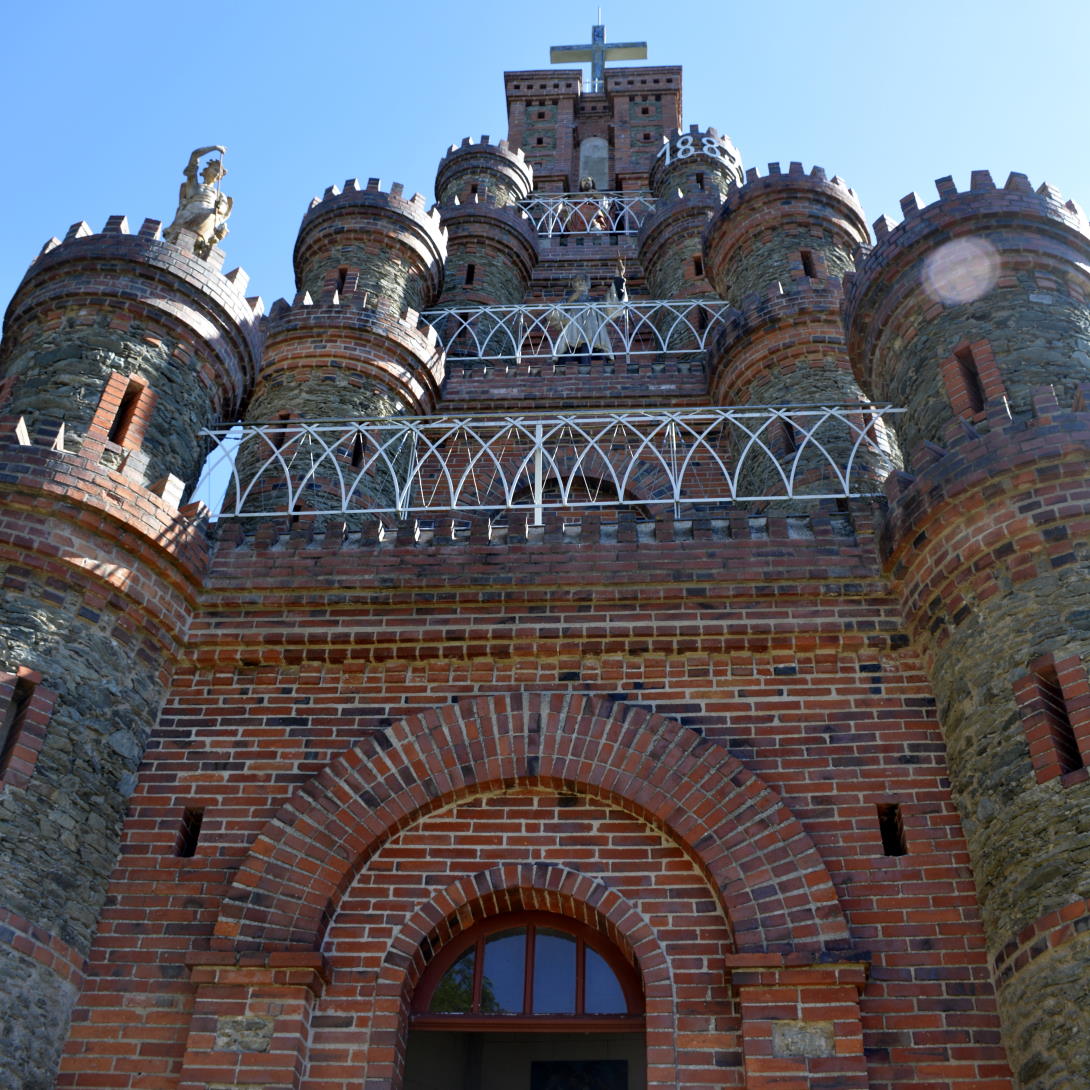 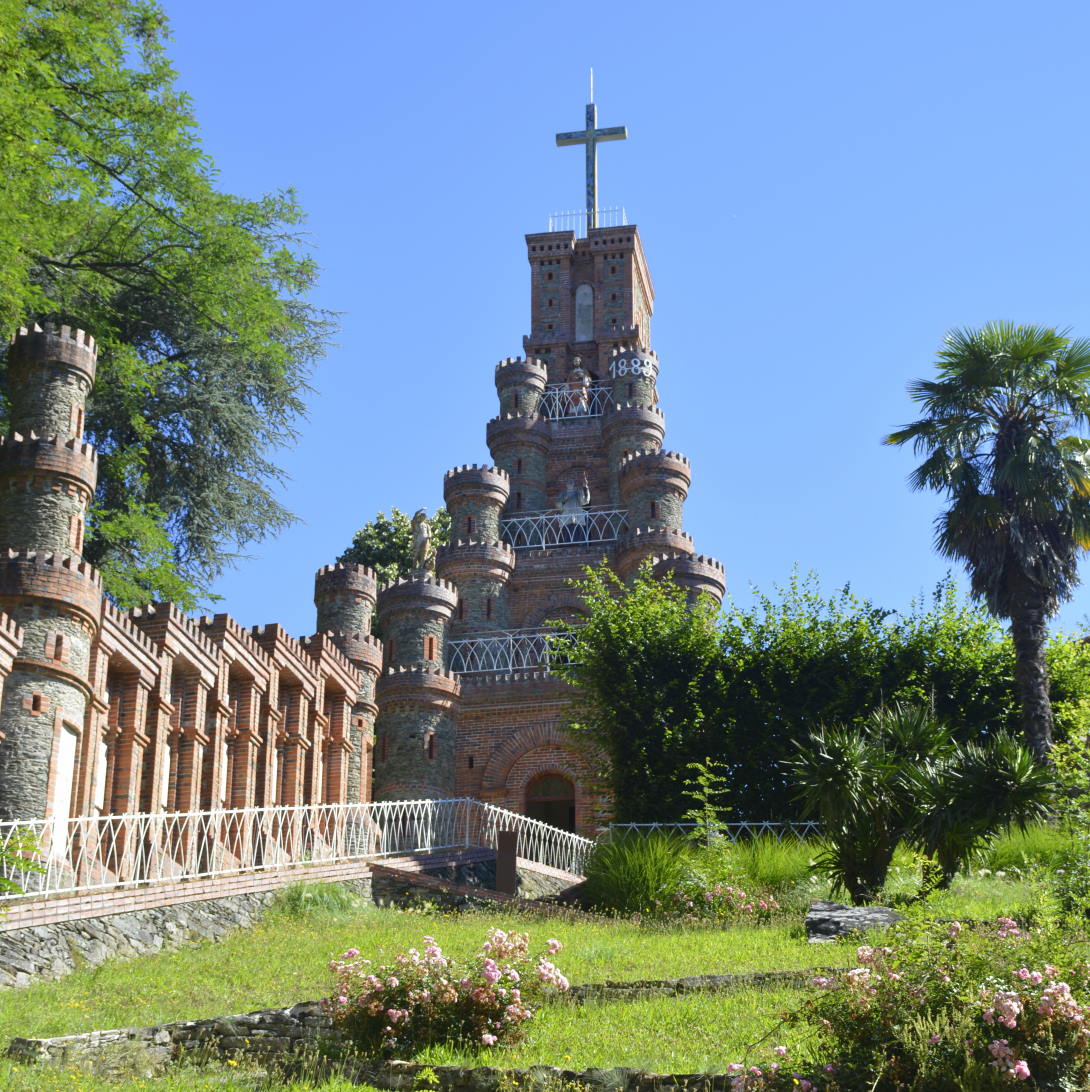 To the left of the terraces dedicated to the apparition at La Salette, there is a ramp bordered by sixteen stelae, or monument stones on which are indicate the stations of the Rosary, one of the symbols most devoted to the Virgin Mary. The large slab stones are interspersed by toothed turrets.

This spiritual ascent leads to a tower called Triumph of the Cross, erected in honour of the Sacred Heart of Jesus. Over 20 meters high, it is constructed on a square plan and studded with turrets and terraces. A local company supplied the distinctive masonry and brick.

The tower is in effect a chapel dedicated to Our Lady of Sorrows.

The terraces have statues of Louis-Marie Grignion de Montfort, of Saint Michel, and of the Sacred Heart. The cross that tops the towers is seven meters high. The original cross was made of oak and taken down in 1935. The current cross is made of mosaic set in concrete.

The Rosary monument was inaugurated on Sunday 23rd October 1889 by Abbot Gelot, cardinal of the church at La Roche-sur-Yon, before a crowd of 15,000 pilgrims.

The Chapel of the Cross of Jerusalem

After a pilgrimage to the Holy Land in 1893, in which many Vendeens participated, a new shrine was needed dedicated to the 7 meter tall Jerusalem Cross carried during the trip. Interestingly, the cross was carved from the heart of an oak tree taken from the grounds of nearby Château de la Rabatelière.

The Abbot Hillairet imagined a new structure in the shape of a square dungeon flanked by toothed turrets, battlements, and arrow slits, symbolizing a fortress of faith.

After having traveled the Via Dolorosa, the processional route in the Old City of Jerusalem believed to be the path that Jesus walked on the way to his crucifixion, the cross was brought back to France.

It was carried in procession by the La Rabatelière parishioners from the Herbergement train station to the church where it was kept for the duration of the work.

In a solemn ceremony on September 28, 1893 the cross of Jerusalem was heaved into the completed chapel and erected in its permanent spot. 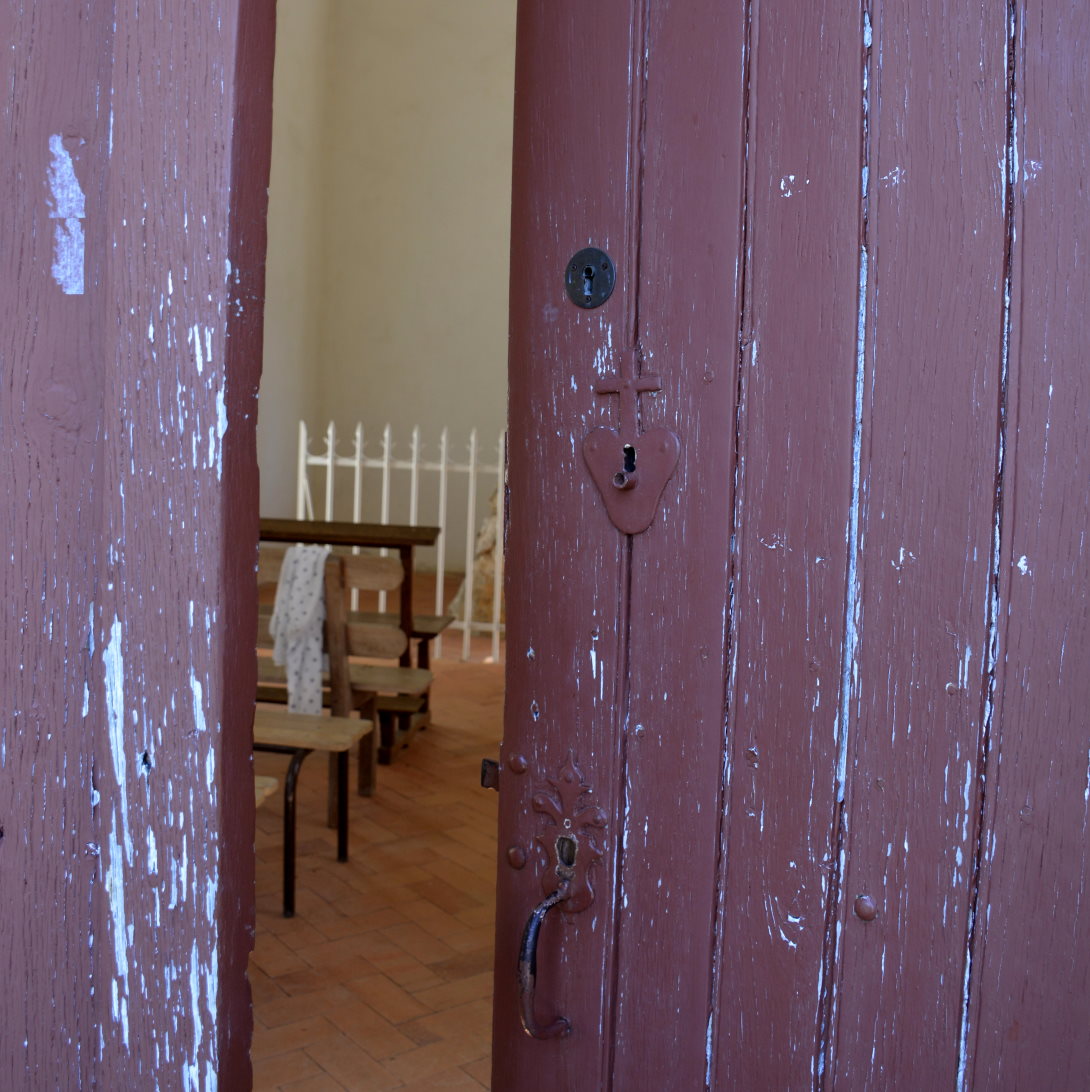 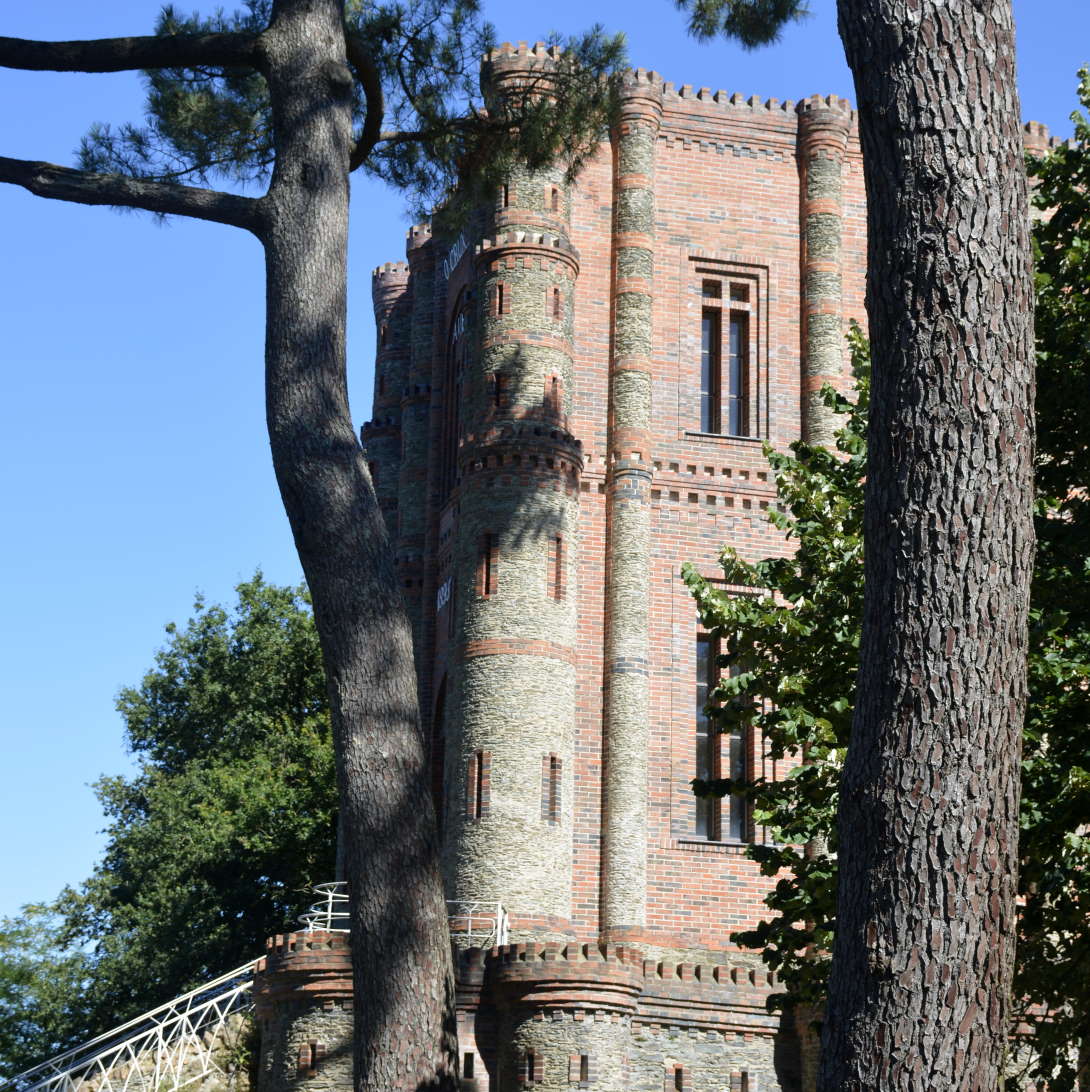 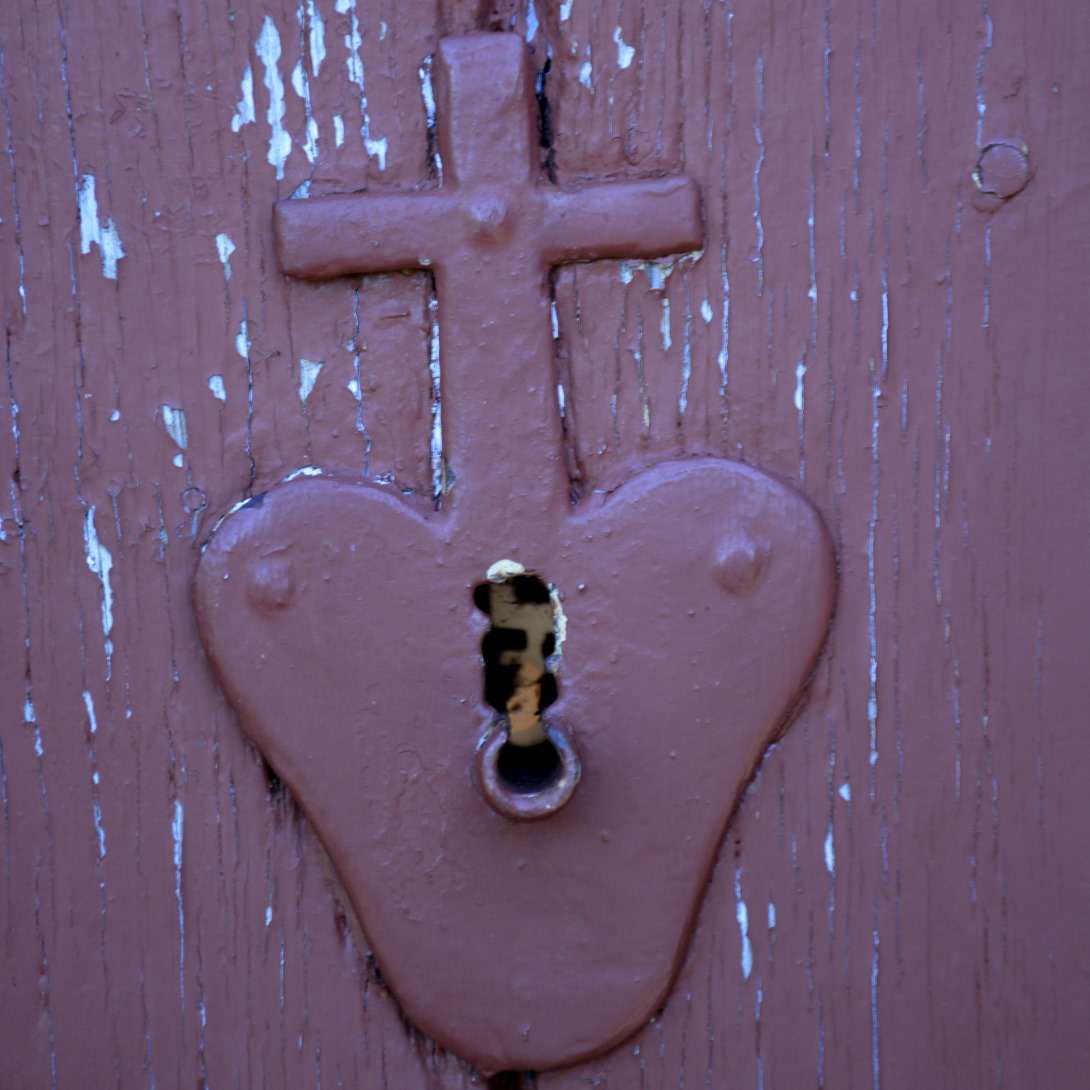 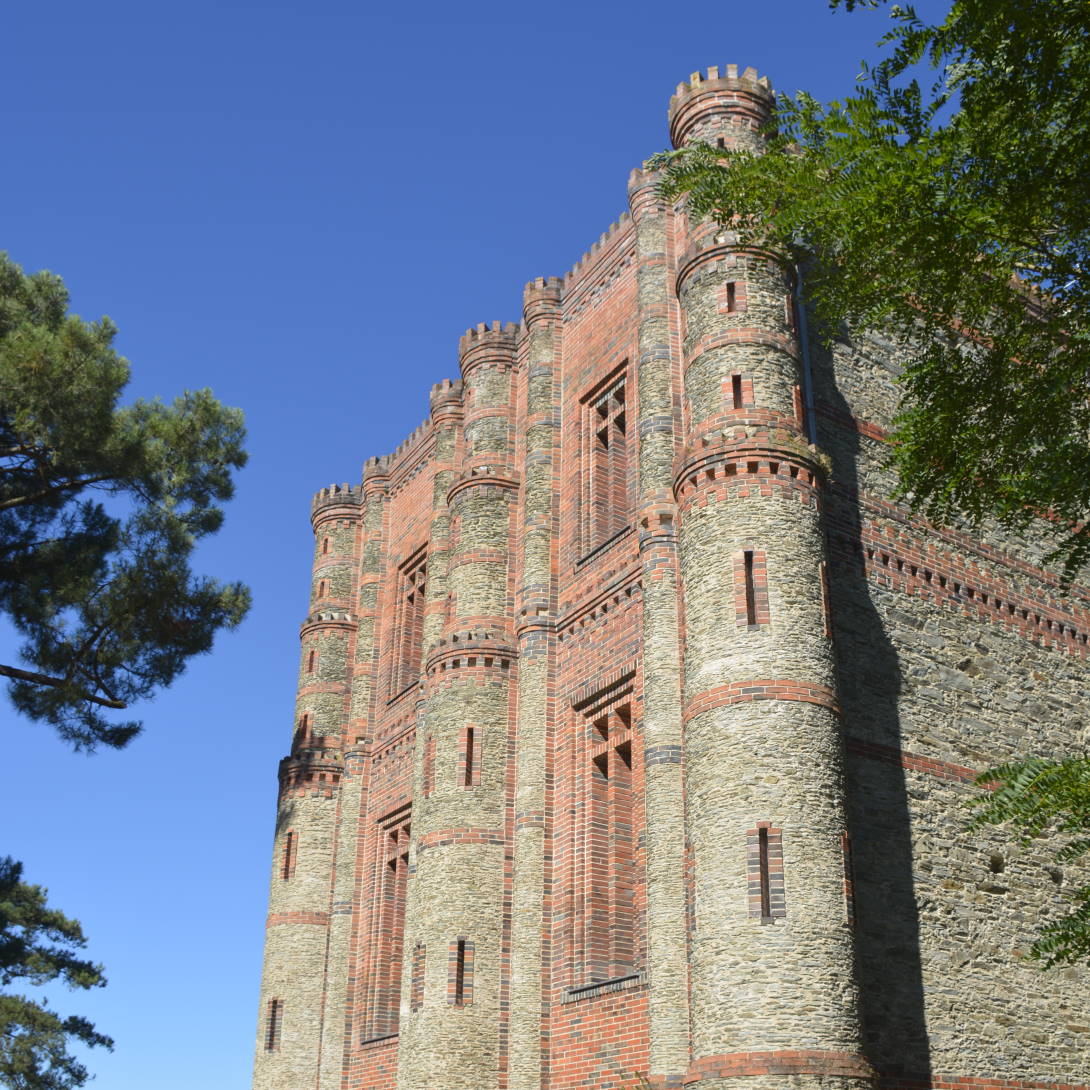 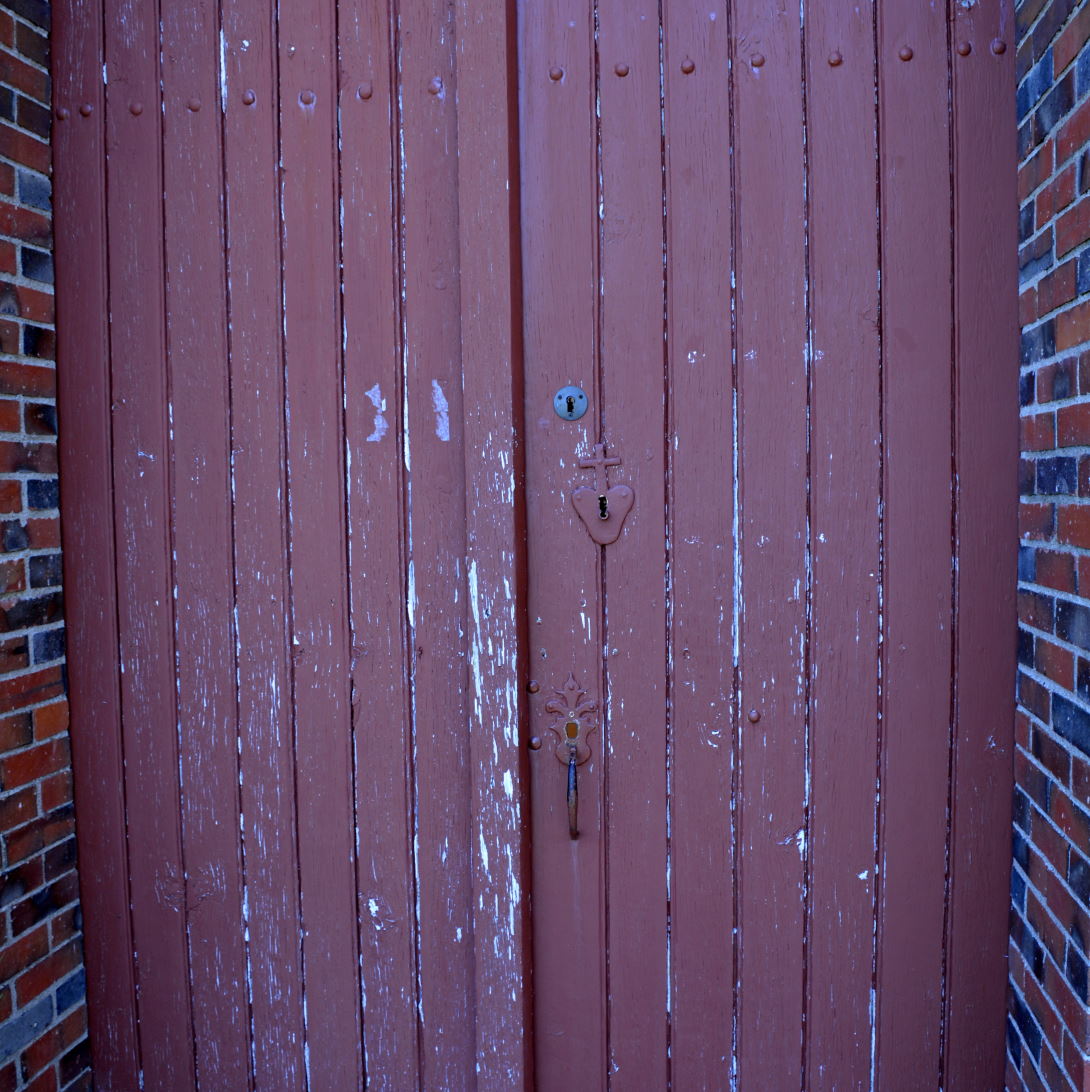 The apparition and the children

The teenagers went on to describe her as sitting with her elbows resting on her knees and her face buried in her hands in sadness. She was clothed in a white robe studded with pearls, a gold colored apron, white shoes and roses about her feet, and high headdress. She also wore a small necklace with a crucifix.

The Virgin insisted people needed to respect the purpose of the seventh day, and respect the name of God. With a great deal of pain she threatened punishment, in particular a scarcity of potatoes, which would rot.

According to the children, she continued to weep even as she spoke to them, first in French, then in their own tongue of Occitan, the medieval language of the Languedoc region. After giving a secret to each child, the apparition walked up a hill and vanished.

The timing of this warning is rather interesting, as it happened just prior to the winter of 1846–1847 which was a period of famine, especially in France and Ireland.

In 1851, after five years of investigating the children's story of the apparition of the Virgin Mary, the Bishop of Grenoble, Philibert de Bruillard announced that it was likely to be a true revelation. He then gave permission for the following of Our Lady of La Salette. This conclusion was also confirmed by his successor, Bishop Ginoulhiac.

The apparition of the Virgin Mary on that fated afternoon in the Alps is depicted in three scenes referring to the three phases of the appearance. In the first, the Blessed Virgin appears to the two shepherd children Maximin and Mélanie sitting on a stone, holding her head in her hands and crying. In the second scene, halfway up the slope, the Virgin is seen standing in conversation, telling each of the children a secret. And at the top of the hill in the final scene, the Virgin Mary rises to the sky before the children's eyes, arms outstretched towards her. 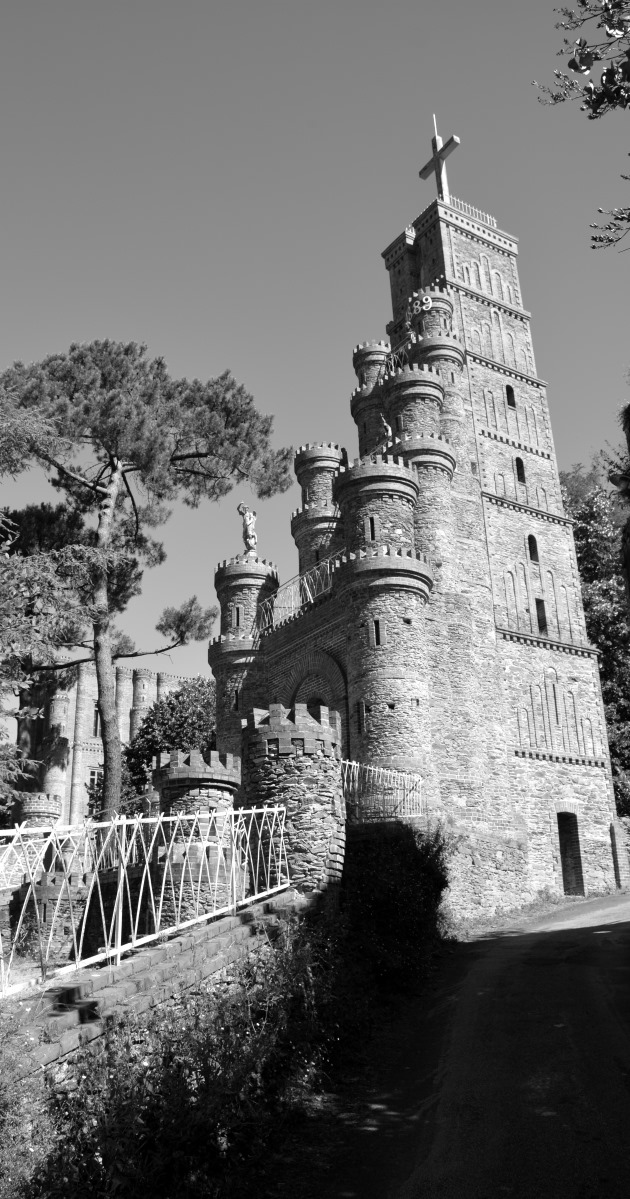 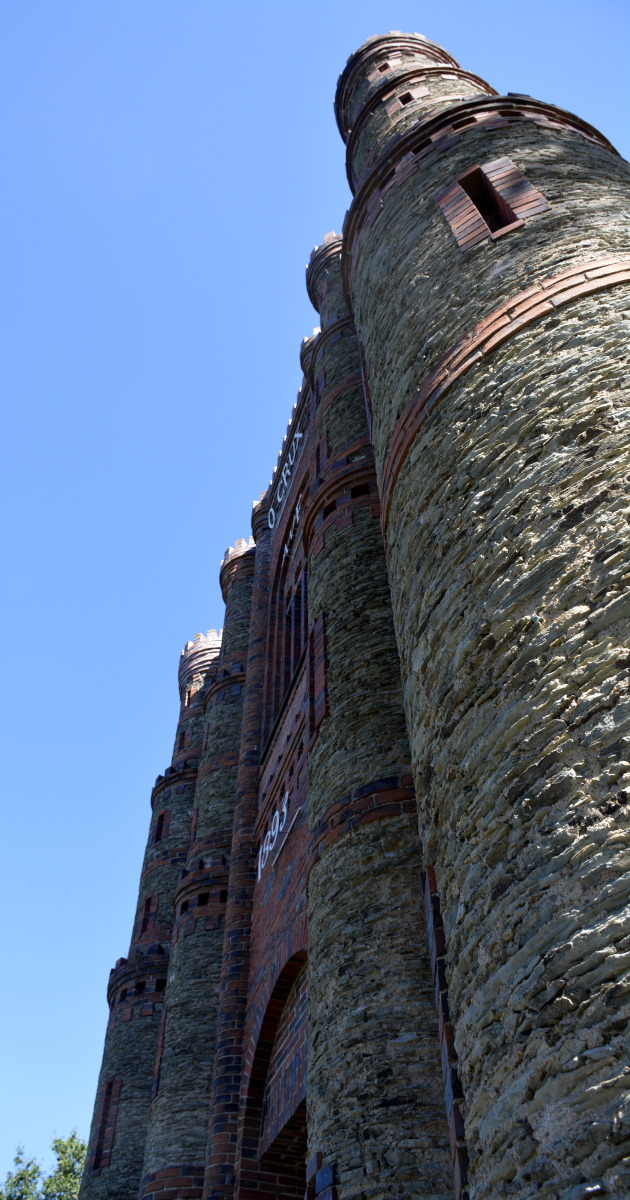 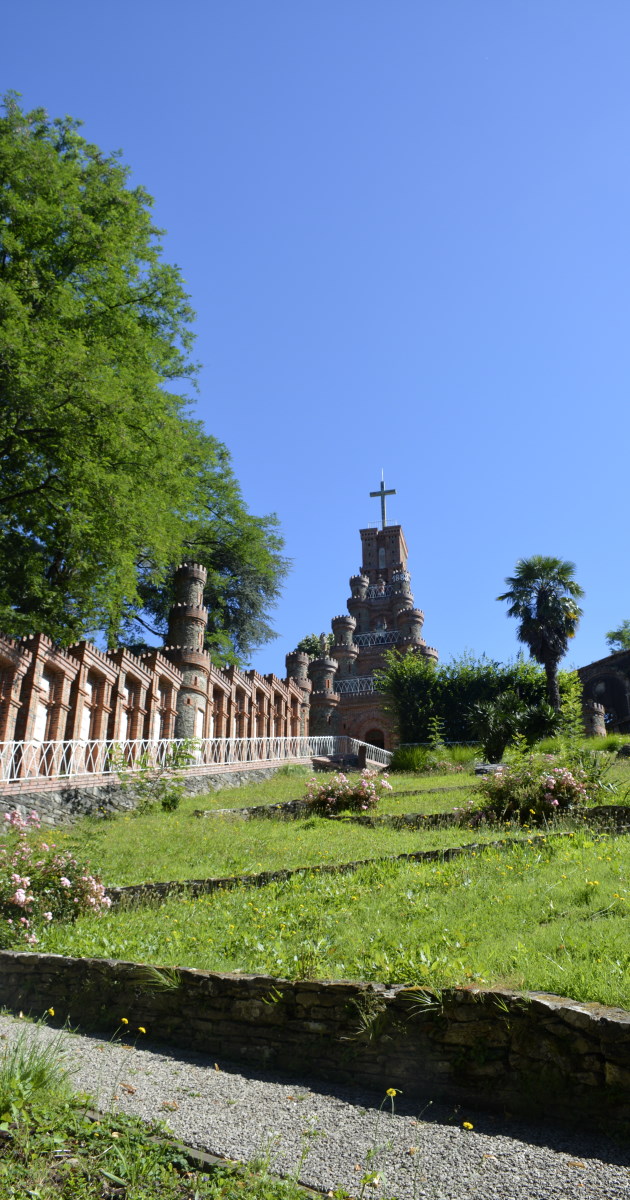 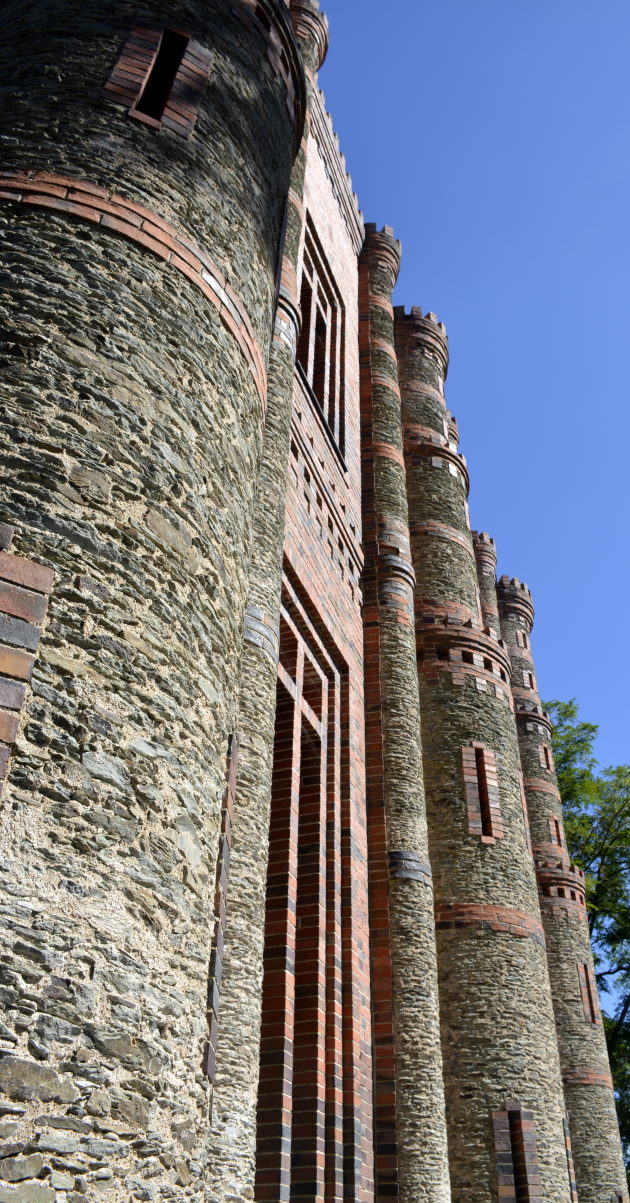 An itinerary for everyone

Whether or not you're particularly religious or Catholic, we highly recommend a visit to the Sanctuary of la Salette simply because of its stunning construction and design. And also the sheer size of the monument. It's one thing to see it in pictures, and quite another to stand at the foot of that hill with zig-zag path before you. In addition to the 'rosary' path to the tall tower, there is also the Path of the Crucifixion and the 14 stations of the cross leading from the bottom of the hill to the chapel of the Cross of Jerusalem.

Postcards and candles available in the tower chapel on the honour system –2 Euros per candle and .50c for a postcard.