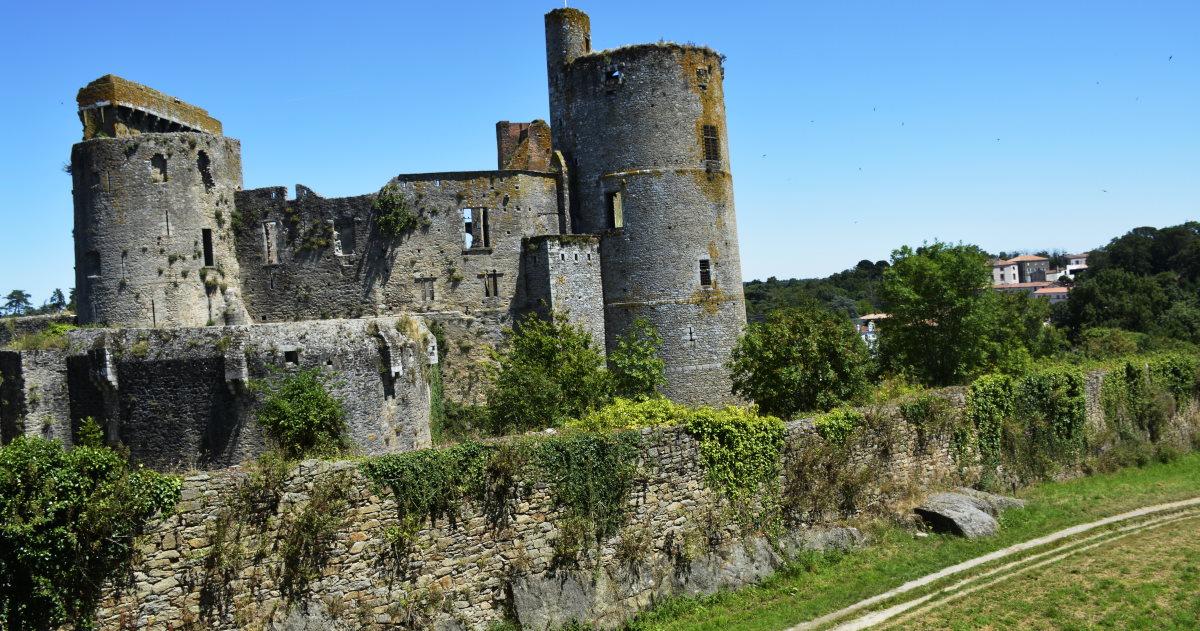 Clisson offers a curious panorama of French-medieval history seen through a Tuscan window. Or vice versa. Is it France? Is it Italy? The short answer: it's a combination of the two. This small village with its imposing castle perched atop a lovely valley where the Sèvre-Nantaise and La Moine rivers merge, was set on fire by the Republican General Kléber during the Vendée Wars. Located on the edge of the Vendée (Poitou) and Loire-Atlantique in an important strategic position, Clisson was home to the Lords of Clisson since the XIth century, from 1089 to 1789! Today, this small town is not only famous for its position in French history and its interesting architecture. For one weekend a year, its just over 7,000 inhabitants grow by about 180,000. The reason? The biggest and roughest rock music festival in Europe.... Hellfest.

Clisson's history and that of the Vendée are closely tied together. Once part of Poitou (what is now Vendée) in the 9th century, until 851AD when the Treaty of Angers between Charles the Bald and Erispoë, the King of Brittany, the lands became part of the Marches de Bretagne.

The castle of Clisson exists from the 10th century and today the oldest parts remaining date back to the 13th century. The noble families who resided and reigned the area continuously between 1089 and 1789 are the Clisson family, the houses of Brittany (Montfort branch), Avaugour and Rohan.

The most famous Lord of Clisson was undoubtedly Olivier V de Clisson (1336-1407), Constable of France.

He was the wealthy feudal lord who fought brutally in the Hundred Years war (war between the houses of Valois and Plantagenêt, for the succession of power) earning him the moniker 'the Butcher'.

In 1435, the Duke François II of Brittany was born in the castle and it was his daughter Anne who became the Duchess of Brittany and Queen of France through her marriages to two French kings: Charles VIII and Louis XII. Francois II was the last Duke of Brittany.

The position of Clisson on the confluence of two rivers, the Sèvre-Nantaise and the Moine made the village ideal for trade and industry. Due to hydraulic power produced by the rivers, more than a dozen leather tanneries , a starch factory and several paper mills were established here.

Early in the 18th century the village was plagued by misfortune when a major frost followed by flooding caused hardship. In 1770,  a flood of nearly 8m above normal river level was disastrous and in 1780 followed smallpox and dysentery epidemics.

At the time of the revolution in 1789 the Lords of Clisson were removed from power over the region. In 1793, during the wars of the Vendée and right on the heels of the Battle of Montaigu, Republican General Kléber besieged the castle and the village, setting much of it on fire.

In 1798, two brothers from Nantes who had lived in Italy, were seduced by the quaint location of Clisson. It is thanks to their influence as well as French sculptor François-Frédéric Lemot that the village was rebuilt, inspired by Tuscan architecture, successfully blending its medieval history with neo-classical elements and terracotta rooftops. Lemot also bought the Château de Clisson so that it would be preserved. 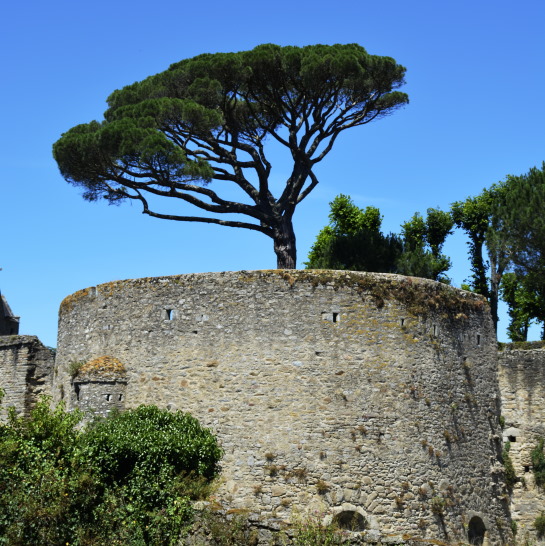 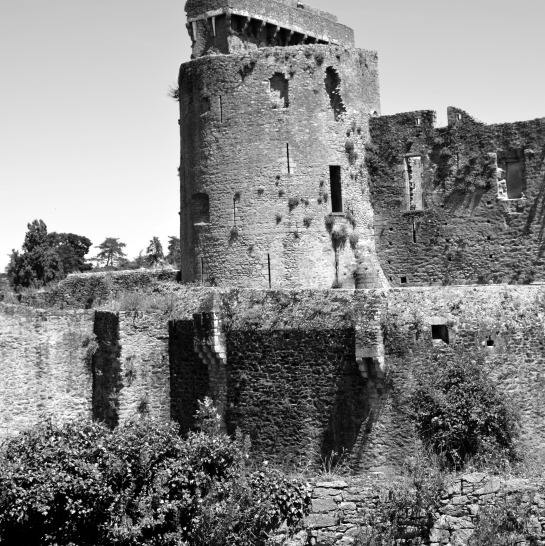 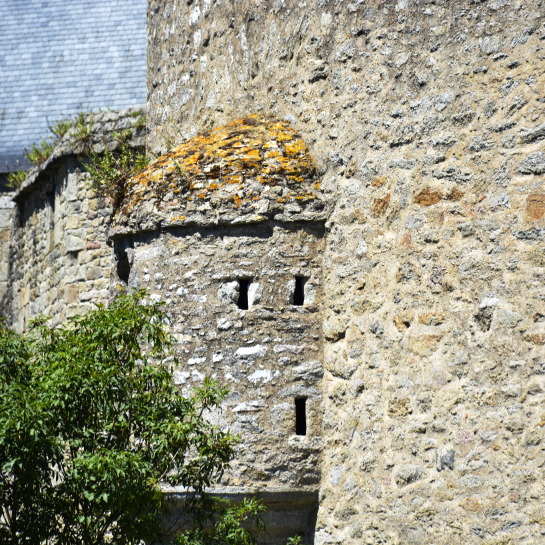 Meandering through the charming medieval heart of Clisson dotted with shops and restaurant terraces is certainly a pleasant activity, but with a dozen historic monuments there is certainly no shortage of things to fill at least half a day. Here is a list:

Other things to see and do – 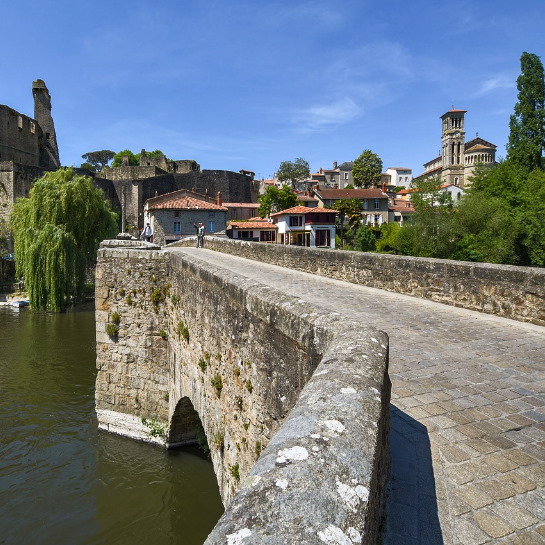 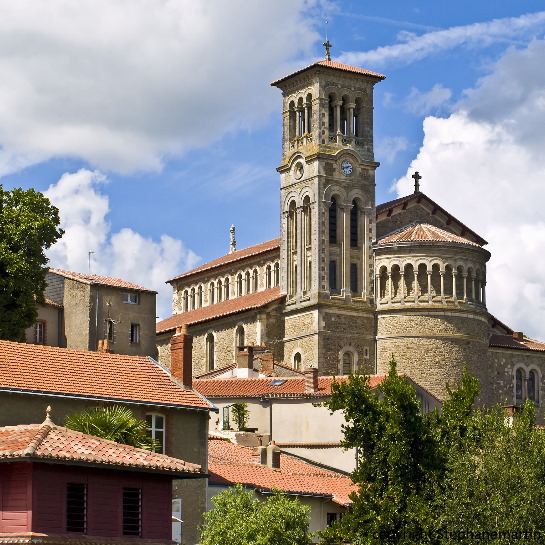 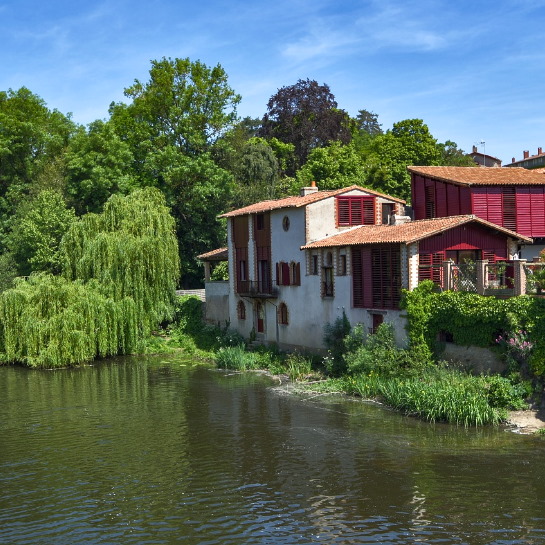 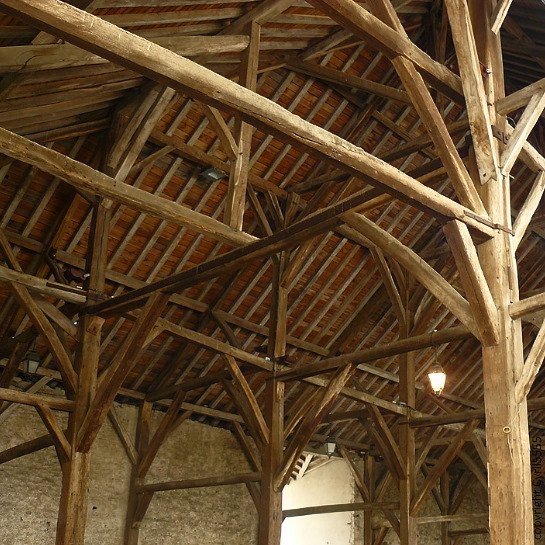 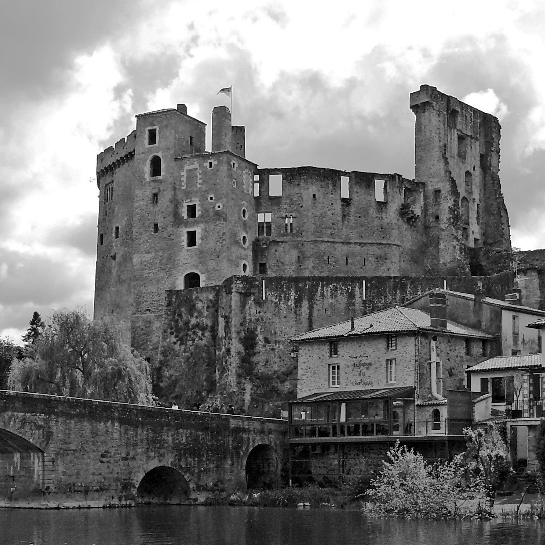 view of the castle 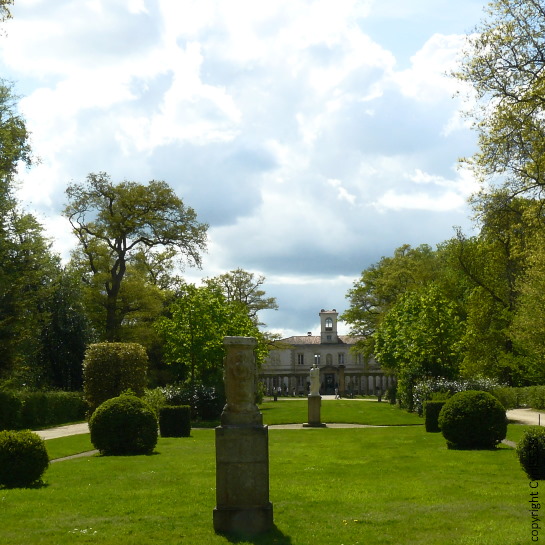 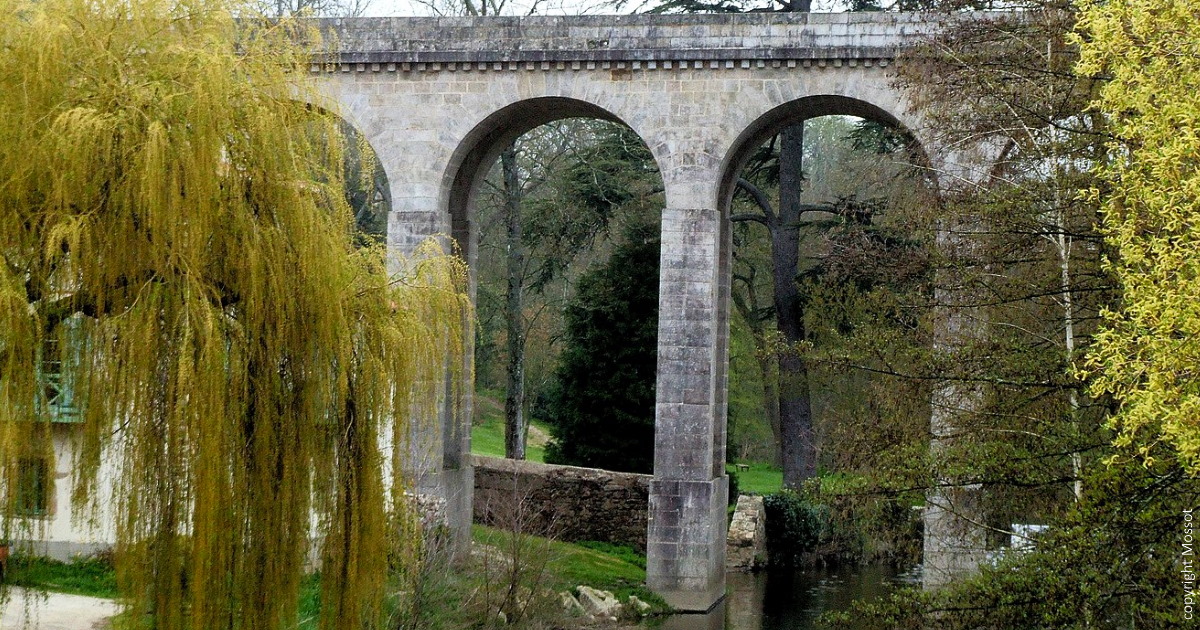 The multi-award winning Hellfest music festival was founded in 2006 by local entrepreneurs Ben Barbaud and Yoann Le Nevé. Revered by huge international bands and heavy metal music lovers alike as one of the best rock festivals in the world, Hellfest has grown bigger every year since. In 2019 the festival welcomed nearly 180,000 people over the three day-period.

Fears of the 'death-culture' and Satanism drew a lawsuit by local conservatives and politicians a few years ago who wanted children banned from the festival and song selection submitted for approval before the festival. The judge ruled against them.

Not only does the festival promote cultural and artistic diversity and inclusion, with a budget of over 20 million euros and the draw of mainstream heavy metal bands like ZZ Top, Iron Maiden etc. the economic impact on small business and tourism in the area is undeniable.

In a sociological survey performed in 2011 by the University of Angers it was determined that well over a quarter of the Hellfest festival goers consists of executives and university graduates.

Contributing to the atmosphere and much more than rock festival, the 5 hectares of Hellfest park dedicated to welcoming the public showcase the artistic spirit of the festival. Even if you aren't moved by the counter culture of heavy metal and punk music, the art installation is a sight to see and something you should not miss when visiting Clisson. It is difficult to select images for this section of our article because we don't want to spoil the surprise!

The experience begins with the roundabouts on the D149 featuring artwork dedicated to rock music, among which a statue of one of the festival's biggest fans and most notorious participants, Lemmy Kilmister (1945 - 2015), singer and bassist of British heavy metal band Motörhead.

Open – Free access most of the year until it's time for the festival in June
Address – Rue du Champs Louet, 44190 Clisson (off the D149)
Map – Google map
Parking – parking on Rue du Champs except in June. During the music festival there is designated parking for ticketholders
Hellfest 2021 – was canceled due to the pandemic.
Hellfest 2022 – is planned for 17/18/19 June. It is sold out.
How to buy tickets for 2023 – It's important to know that this festival is extremely popular and sells out one year in advance. The best way to buy tickets for 2023 is during the festival in 2022, at the festival ticket office. AS SOON as they go on sale. The 3-day passes sell out in under 1.5 hours.
Tips – Looking for tickets? Try the website Ticketswap. At time of this publication (March 2021) 2 people offered their tickets for 2022 on the site... there are 16,842 concert goers on the waiting list.
Images – by inthevendee 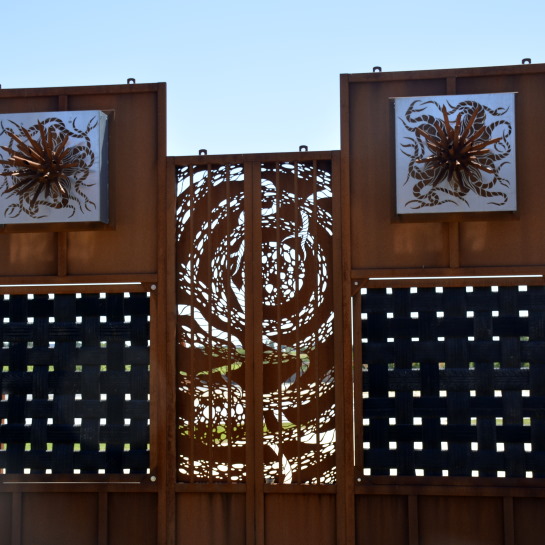 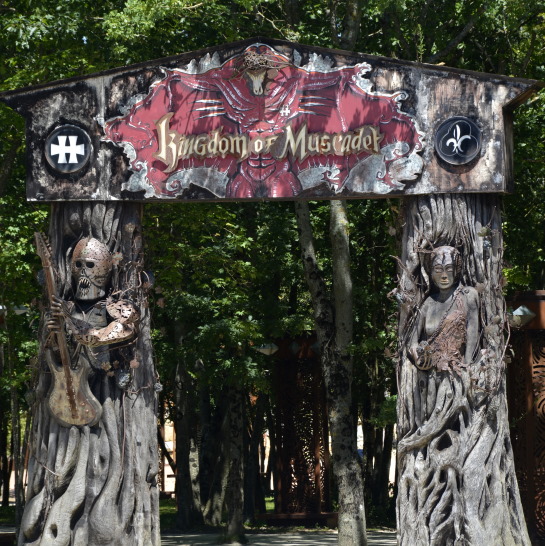 the park is kept in pristine condition 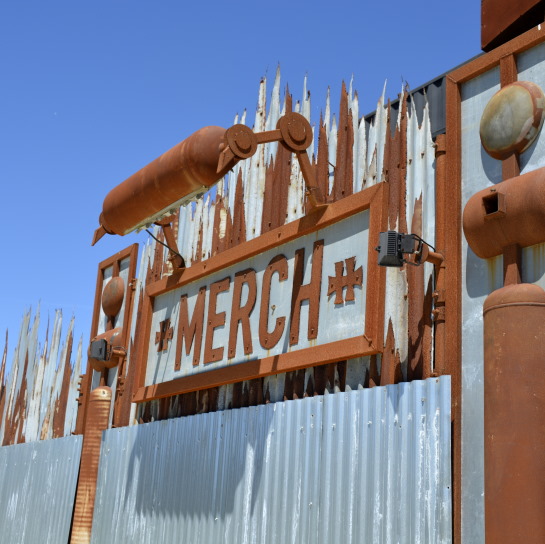 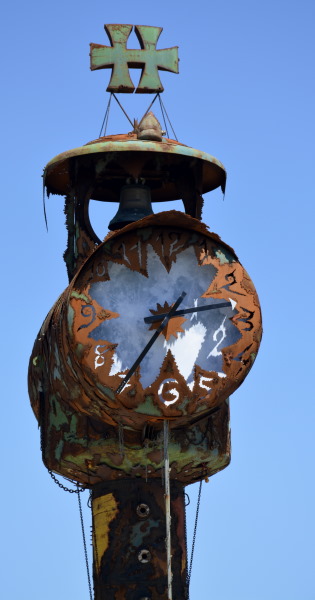 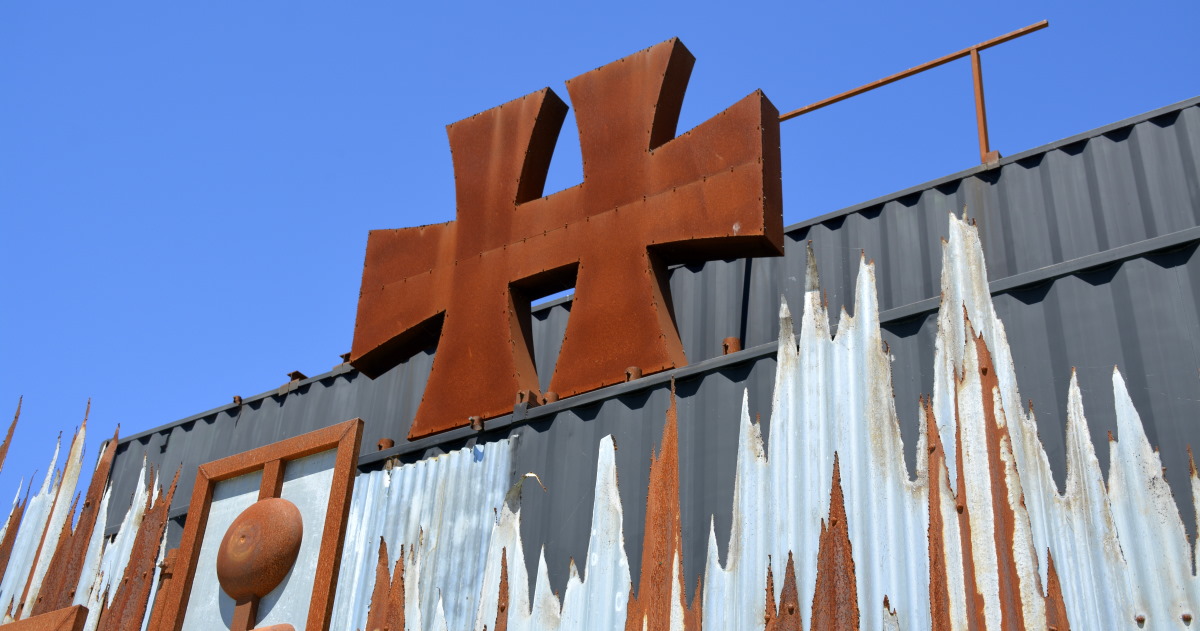 the medieval double crosses or metal hammers are omnipresent

Clisson is just a short drive away from just about anywhere in the Vendée. Spring is a great time to visit the area. As the pandemic still has a hold on us and the season is beckoning to enhance our cultural barometer, a walk around the village as well as Hellfest park is a great way to shake winter's cobwebs off of our shoulders.

Clisson is no more than 5 minutes outside the border with the Vendée to the north, and its proximity is a good excuse to seek out the on-vacation feeling that never lets us down in France. If you are on holiday in the Vendée, Clisson is a great little town to leave the lawn chair by the pool for what will amount to a fun and interesting day sightseeing. We hope you enjoy it as much as we do! Social distance included.