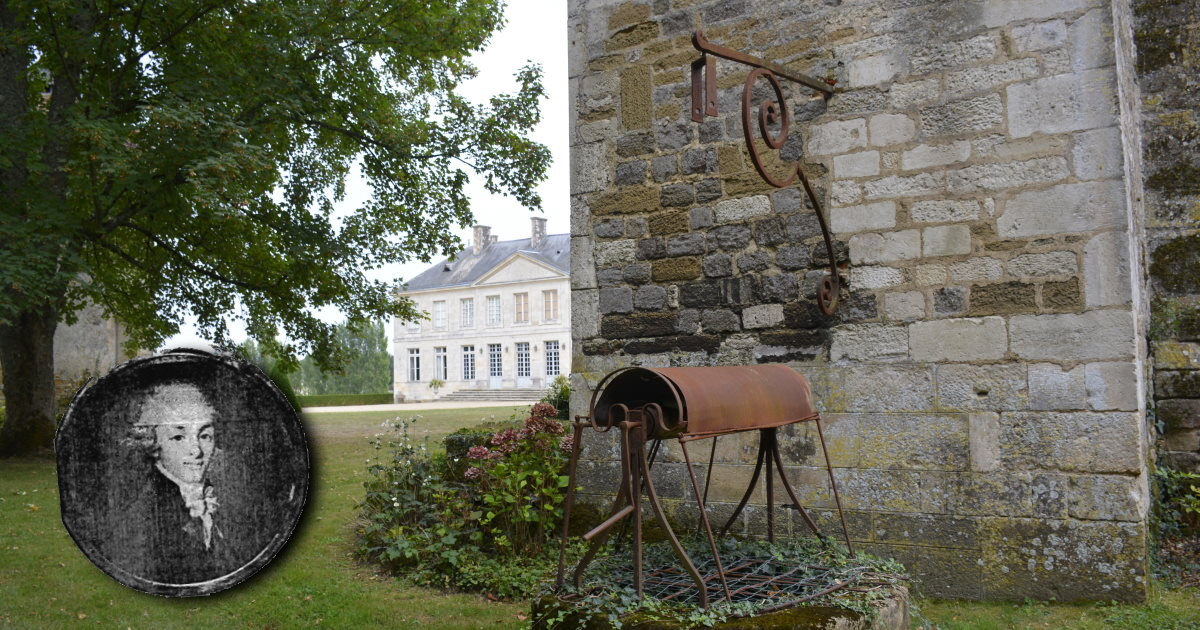 Chatting with the current châtelaine of Château de l'Hermenault, it came to light that the person who sold the beautiful castle to her forefather in 1806 had been Daniel Garesché, mayor of La Rochelle in 1791-1792. In our pleasantly lengthy conversation, the kind châtelaine said "Garesché family is fascinating. You should look it up." ... So, we did. We found in Daniel Garesché a man who was part of a veritable dynasty. A family that, to put it mildly, left their at times muddy boot prints on the history of France, Haiti, and the United States of America. With the motto "Jamais sans Espérance" (Never Without Hope) to lend a strong hand, it is the story of close-knit family built on patriarchal opportunism and survival spanning centuries, and touching the Vendée along the way.

To truly understand the opportunistic make-up of this family it is necessary to travel back to the 16th century, to the Religious wars which were fought so mightily in France. In the mid-16th century a movement of middle class nobility, scholars, lawyers, businessmen and financiers... people with some measure of wealth, turned away from the Catholic faith to become Huguenots or Protestants i.e. converting to Calvinism. Their reason for doing so was entirely rooted in the Catholic King's denying middle class noblemen access to parliament, hereby keeping them from having any influence or say in what they saw as increasingly autocratic policies by the French monarch and his 'queen mother'.

Catherine di Medici, in an effort to keep authority while creating religious peace, brokered the marriage of her Catholic daughter Margaret to the Protestant Henry of Navarre (future Henry IV of France). Of course, the extreme factions among the Huguenots saw right through the hypocrisy, and their influence among noblemen calling for armed rebellion created a dangerous problem to the monarchy. The wedding between Margaret and Henry on August 18th, 1572 quickly turned  from an opportunity for peace to a plot to kill one of the most prominent Huguenots, Gaspard de Coligny. As celebrations for the attempted peace continued among the many wealthy and prominent Huguenots who had been invited to Paris for the royal wedding, August 24th, 1572 ended in  Le Massacre de la Saint-Barthélemy or the St. Bartholomew Day Massacre in which nearly 2000 protestants were slaughtered.

Many Huguenots fled the country for Holland. Without titles and land holdings which they had lost, they were forced to think on their feet, to make their fortunes in a different way. While the marriage of Margaret and Henry didn't amount to much, they found some sort of common ground in working secretively to bring some sort of civil union to France, to eventually end the wars of religion. It took years but when Henry succeeded to the throne as Henry IV, he signed the Edict of Nantes in 1598. The edict returned significant civil rights back to the protestants, allowing them to hold assembly, freedom of worship, admission to public office, judicial privileges, and control over hundreds of French cities including La Rochelle, which had become an important port for trade (following the successes of the Citadelle de Brouage) 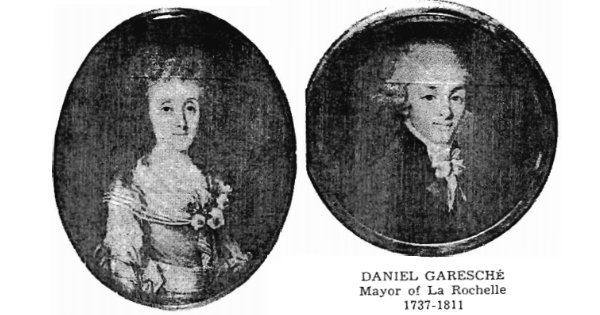 Portraits of Garesché and his wife Marie-Anne

Although the name appears to be Celtic in origin [Gar-a-Shaih] and centuries older, the first written record of the Garesché dynasty dates back to 1635 with the birth of Jean in Nieulle sur Seudre,  in the Charente Maritime. Little is known about his parents except they were Huguenots. Jean was a well-to-do businessman.  His wife was Marie Gourbeilh, and they had 5 children. Unruffling the family tree from here on becomes complex. Strangely, but perhaps normal in the 17th Century, names traveled throughout the family and were sometimes used twice in the household! We will keep information restricted to those Garesché's who will become important historical figures. Jean and Marie's youngest son was

By 1685 King Louis XIV (the Sun King) had evoked the Edict of Nantes. The Huguenots were now stripped of any civil rights and barred from a military career. When Isaac Garesché and Marie-Anne Monbeuille wed in 1735 they had no qualms lying about their protestant background, claiming to be Catholic converts. They married in the Catholic church to ensure their children's civil rights. But behind closed doors they continued to live as protestants.

At some point, Isaac had been to Holland with a few of his siblings to educate in business and trade. He became a rich merchant, constructing 500-ton seaworthy ships that were used for trade with Canada and the Colonies. At the time, what is now called Haiti was called Saint Domingue, French territory since 1685. It would be fair to say that the port of La Rochelle had a monopoly on the sugar trade. By the time of his death in 1769, Isaac had long ditched the pretense of being Catholic. He lived openly as a protestant but their decision proved to have been smart, for Isaac and Marie-Anne's children are certainly the dynamo that propels several corners of history at once. For better or for worse, without their Catholic wedding, it may have all happened very differently. Three of their sons continued the merchant trade, working together but each with their branch of the business.

The Garesché, De Bauduy, and Des Chapelles families were the most prominent in Saint Domingue, owning large, fruitful plantations producing sugar cane, tobacco, and coffee. For the Garesché family being plantation owners, shipbuilders and merchants both in the products of their land and in the slave trade, made their fortune - they were extremely rich. But the revolution and misfortune (politics between France and England, pirates, shipwrecks etc.) also snatched most of it away.

The first of many marriages that linked the colony families of le Bretton des Chapelles, de Bauduy, and Garesché together took place on October 4, 1790, when Pierre Bauduy de Bellevue wed Juliette Thérese Jeanne Julienne le Bretton des Chapelles in Léogane, Saint Domingue. In 1791 Pierre and Julliette were the first French refugees to arrive in America in 1791. Eventually two of Pierre's daughters were married to two of Jean's sons. From the moment they landed in America, Pierre de Bauduy and Jean Garesché du Rocher were close to the American establishment and the beginnings of the U.S. constitution, befriending Thomas Jefferson, Andrew Jackson, Baron von Steuben, Robert Morris, financier of the American Revolution, William Thornton (an architect of the first US Capitol) etc etc etc. Eventually the family would disburse to New York, St. Louis, New Orleans, Martinique and Cuba. 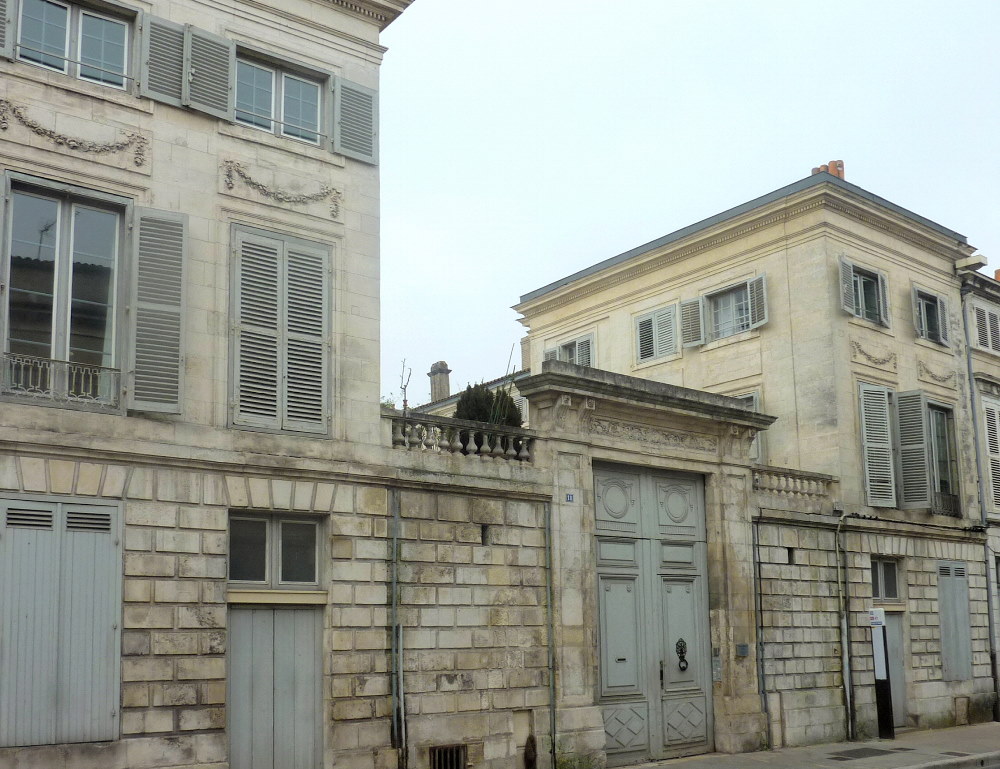 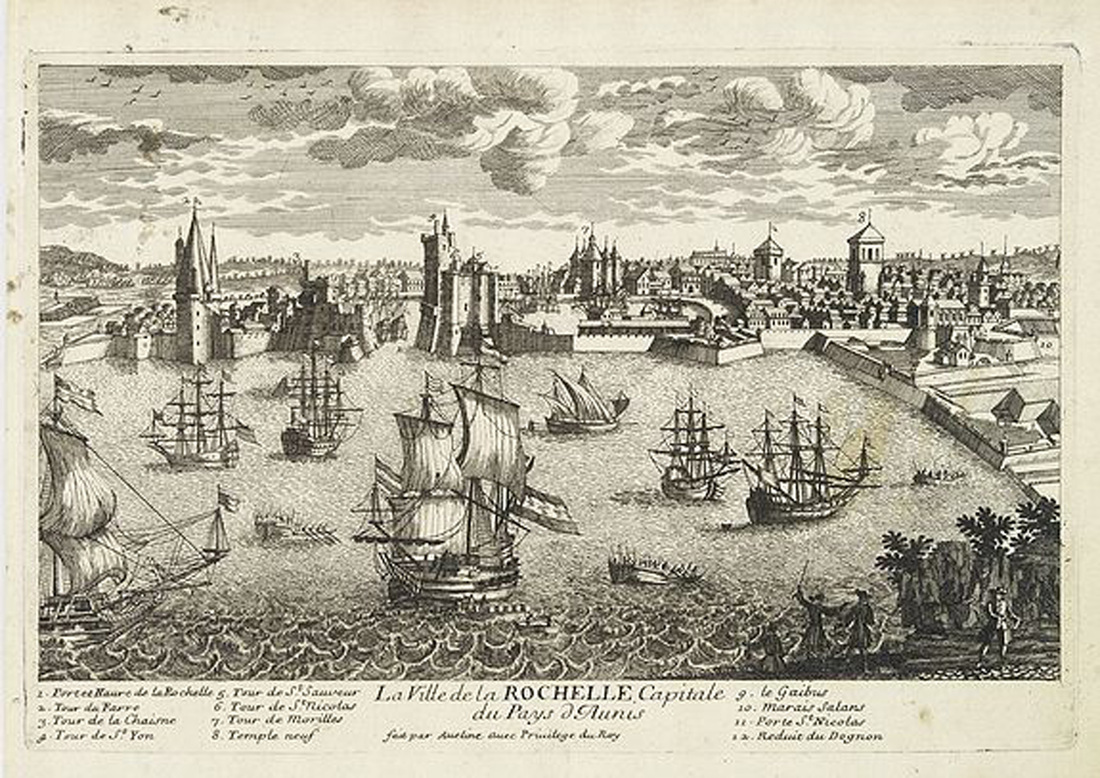 Engraving of La Rochelle circa 1792 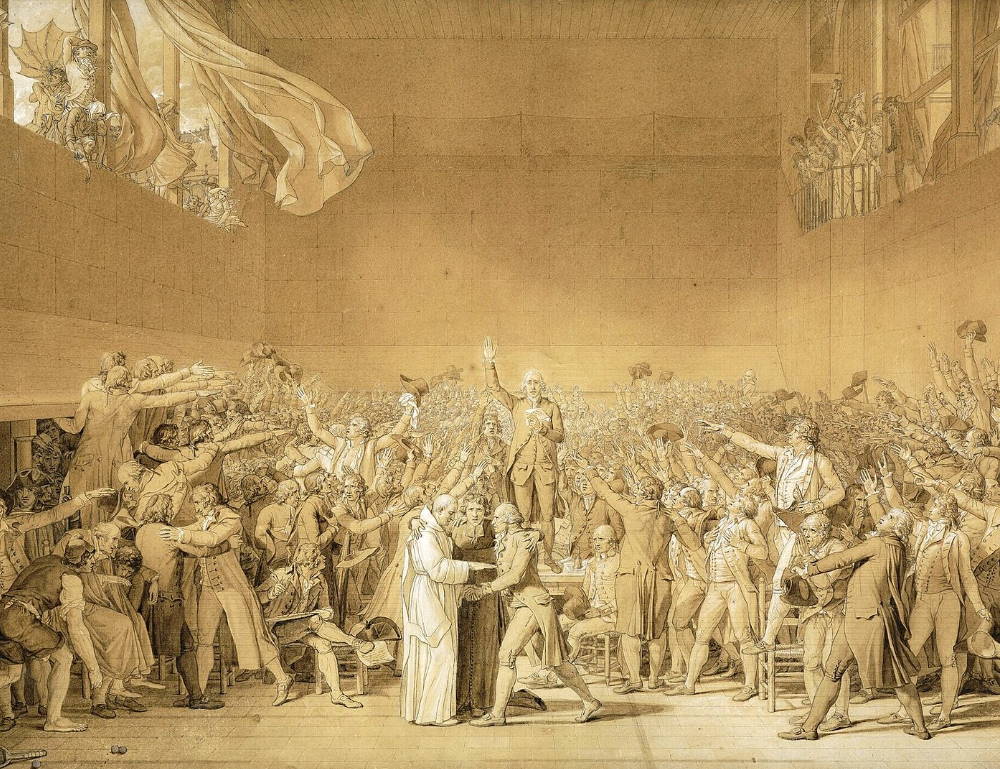 The Oath of the Tennis Court anno 1789

St. Louis Post Dispatch printed an article of a document found among papers given to St. Louis University by Alexander J. P. Garesché.

Account of sale made at the Cap by Pouper Bros. of 734 head of negroes, constituting the cargo of the ship Le Monthion of La Rochelle, Capt. Amable Lespenne, fitted out by Mr. Daniel Garesché and coming from Mataumbi on the coast of Senegal and which arrived at the Cap the 24th of November last, sold since December 1, when the sale began, up to date the 27th, when it was concluded upon the following terms. (Then follows under the head of Messieurs les Débileurs a list of 77 purchasers, with allotment and price of slaves to each) the article continues:
Summary of present count: Seven hundred and thirty-four captives, consisting of 465 negroes, 176 negresses, 57 male negro children and 36 female negro children, and which produced 1,173,000 23-75 francs -- 734 averaging per head 1,606 17-100 francs. Sale: The present account of sale amounting to 1,173,000 francs is the product of 734 head of negroes forming the cargo of the ship Le Menthion, Capt. Amable Lesspene [sic], and which sum we carry to the credit, less expenses of exchange, besides four heads which were conceded to the following officers, pursuant to agreement with Mr. Garesché. To Mr. Lessens, two negroes. To Messt's. Menages and Chaton, one male negro child, each, and which, according to prices brought, were worth a total of 730 francs. (excerpt from Private family history and genealogy)

In letters written by the Office of the Ministry with regard to the mistreatment of slaves it was okay to do enough to keep them dependent and submissive to their masters, but not so much as to have them revolt. Reprimands should be done in secret so as to keep the respect of the slaves. In such a letter it was written that "with impunity, [Jean] Garesché could keep a slave in chains for twenty-five years". (excerpt from The Haitian Maroons: Liberty or Death) 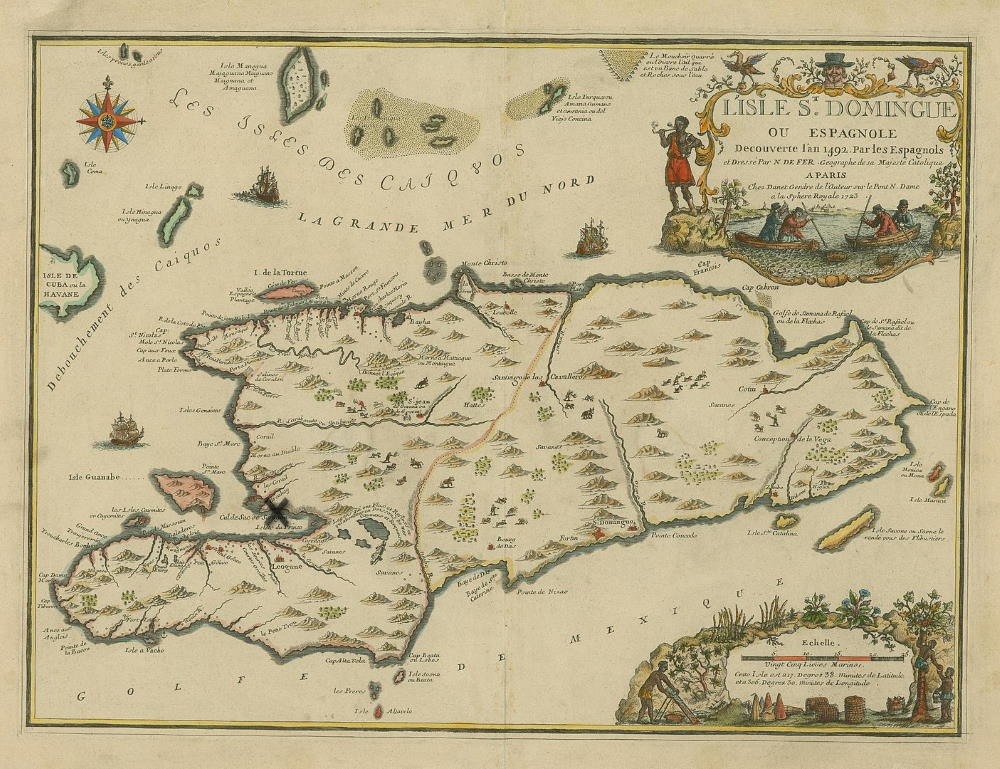 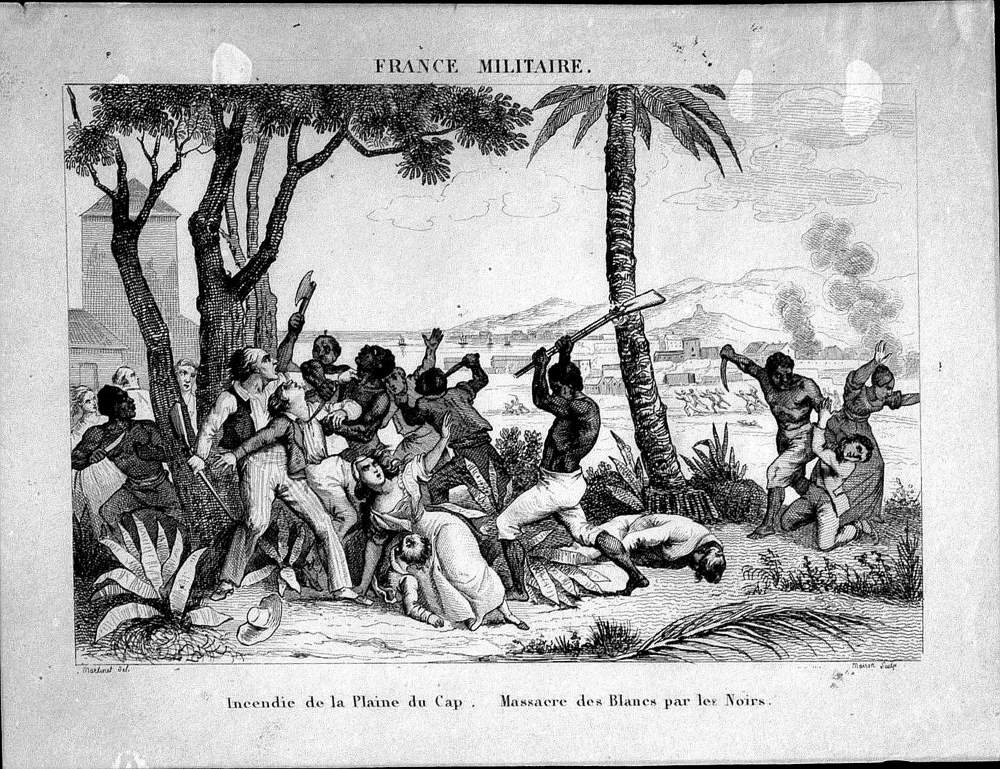 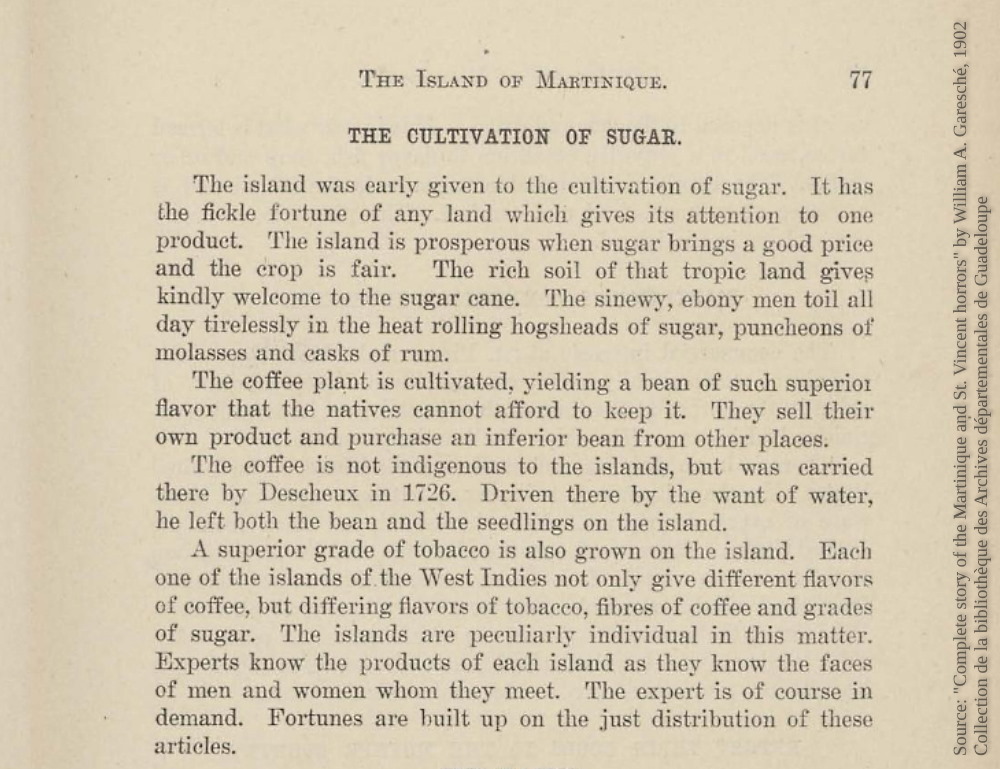 It bears mentioning that the great-nephew of Daniel Garesché, Lieutenant Colonel Julius Peter Garesché, Westpoint graduate, recipient of the Knight of St. Sylvester by Pope Pius IX, grandson of Jean Garesché du Rocher and son of Vital Garesché was riding with General Rosecrans when Garesché was quite brutally decapitated by a cannonball December 31, 1862 (aged 41). He is interred as a hero of the American Civil War at Mount Olivet Cemetery in Washington, D.C.

Daniel Garesché along with his entire family not only left a footprint on the Vendée but on the very fabric of history as we know it today. Sometimes that history is dark and shameful. And at other times, for certain family members who chose to live a more righteous life, it is revered and celebrated.

As Mayor of La Rochelle (August 1791 to May 1792), Daniel purchased the beautiful Château de l'Hermenault in 1791. The castle and former winter residence of the bishops at Maillezais abbey and La Rochelle had become property of the State in the French revolution. The Bishop's castle built during the Renaissance by Monseigneur d'Estissac and restored after the wars of religion was mostly destroyed during the Revolution and Garesché had most of the rest dismantled. Today, only a tower and dovecote, as well as the 17th Century arcaded outbuildings, the stunning barn, the tiered terraces, the park and the 18th century Logis des Dames remain of Garesche's time.

Losing much of his fortune by the revolution in Saint Domingue, Daniel Garesché eventually sold Château de l'Hermenault to Pierre Godard des Breuze, Colonel of the Empire in 1806 and has remained in the same family ever since. 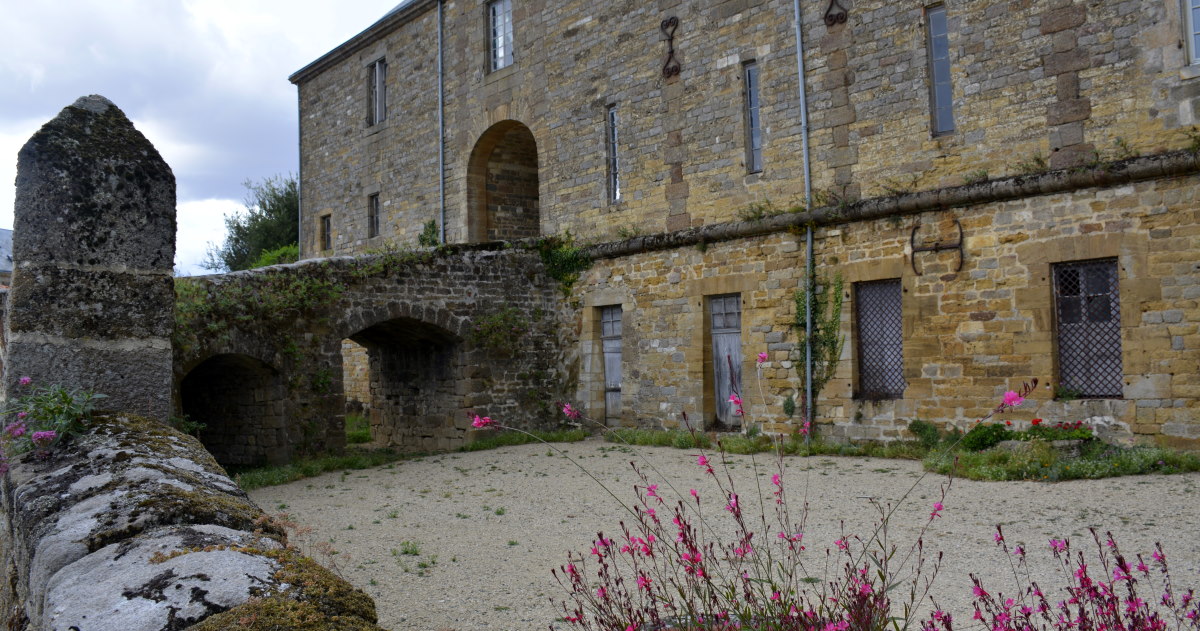 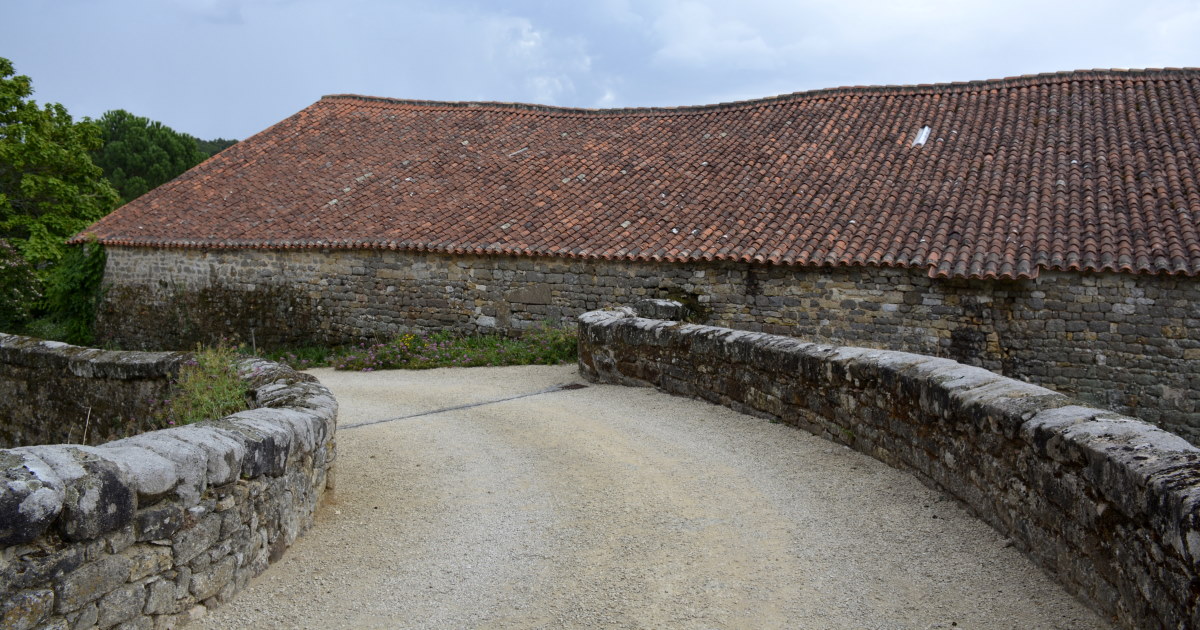 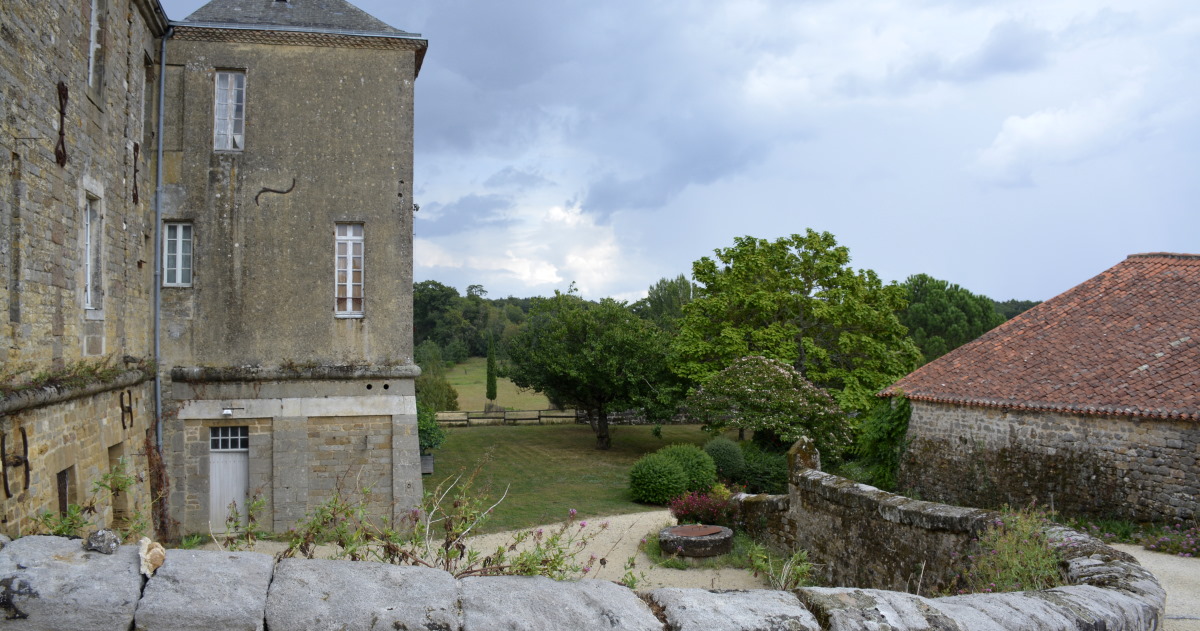 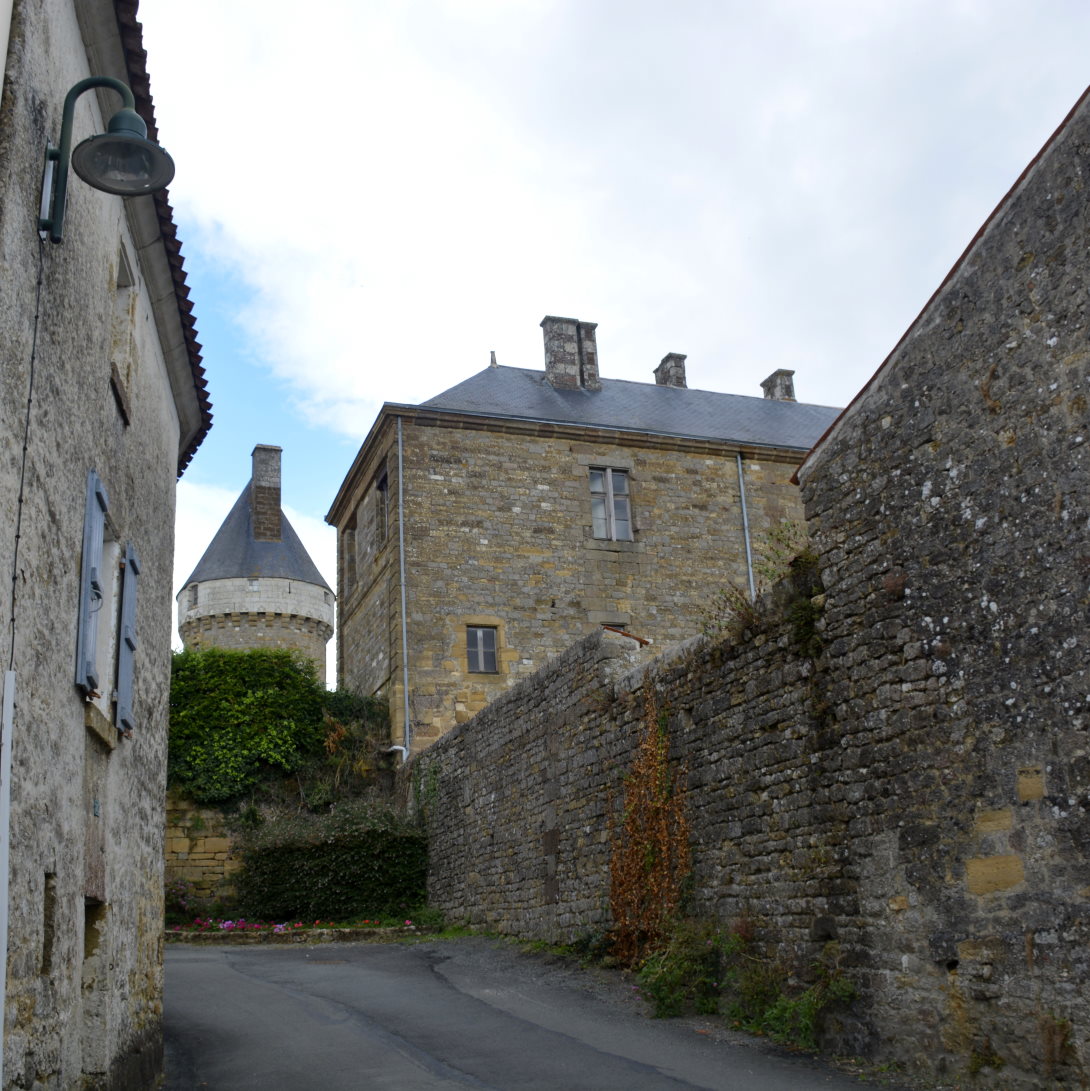 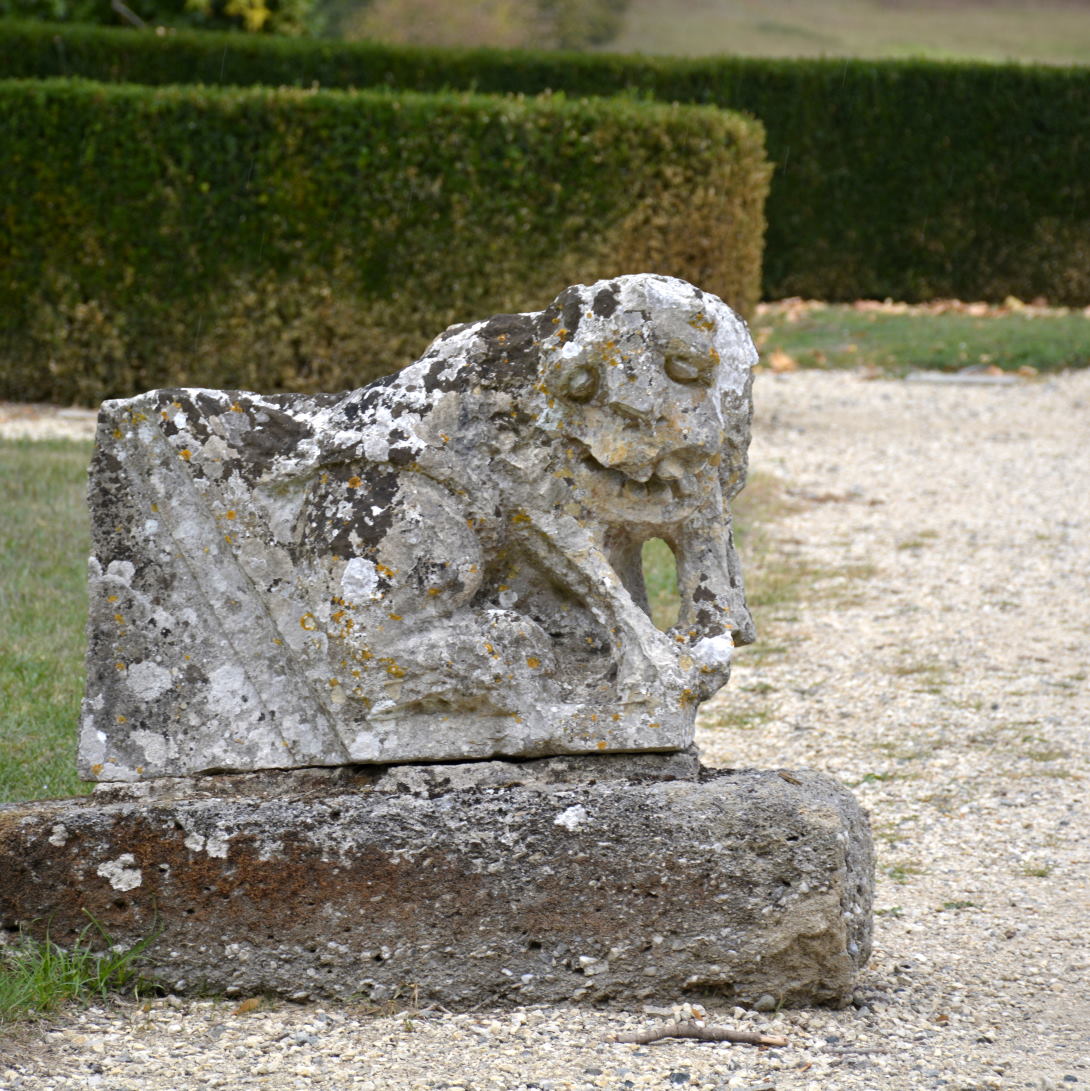 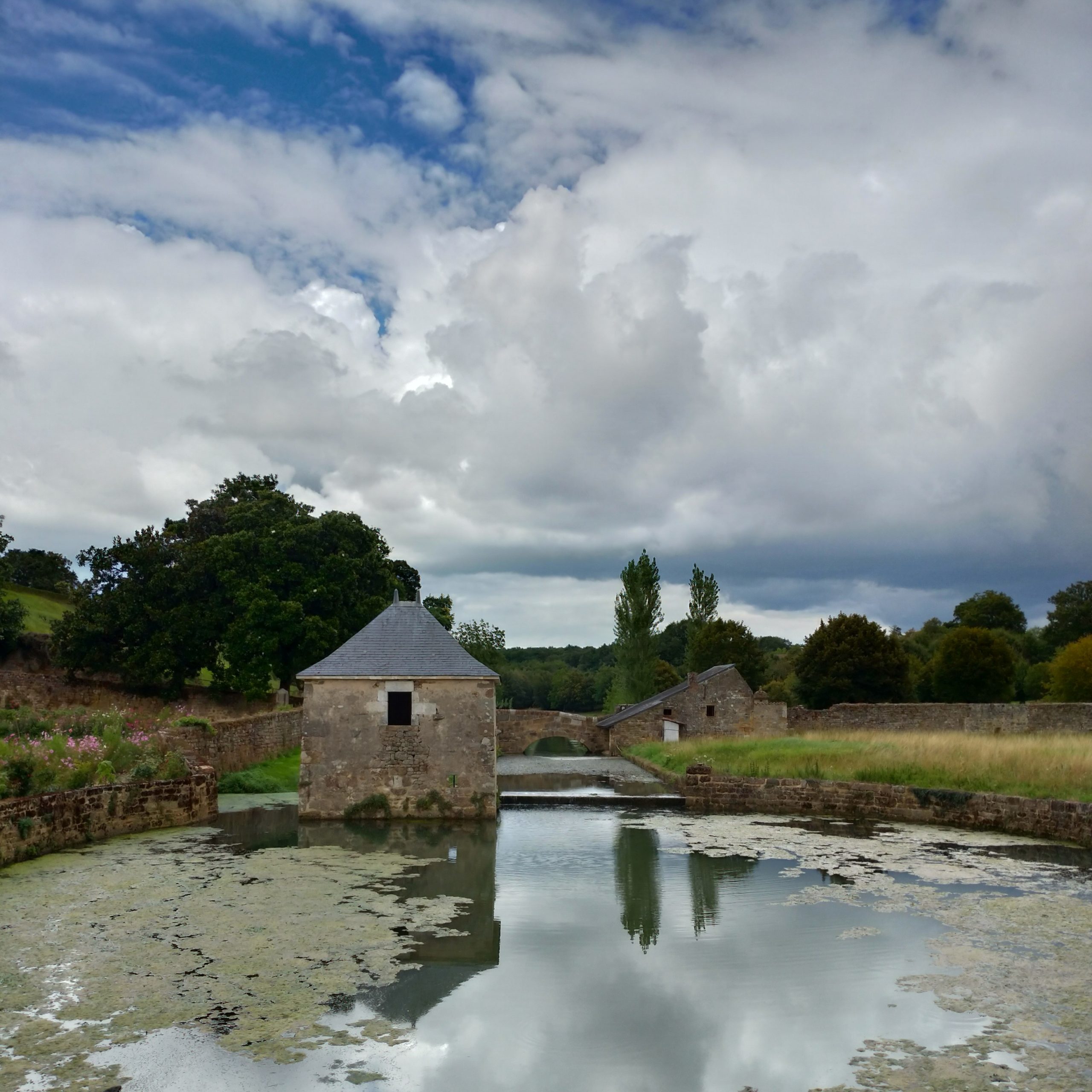 Open – see website for June to Sept schedule but you can always see the canal with lavoir, watermill and horse pond from the street
Tickets – €5 adults (children <12 free)
Address – rue du Château,
85570  L' HERMENAULT
GPS coordinates –  46.518697, -0.898290; enter your location
Nearby – Fontenay-le-Comte, Vouvant and the Mervent forest 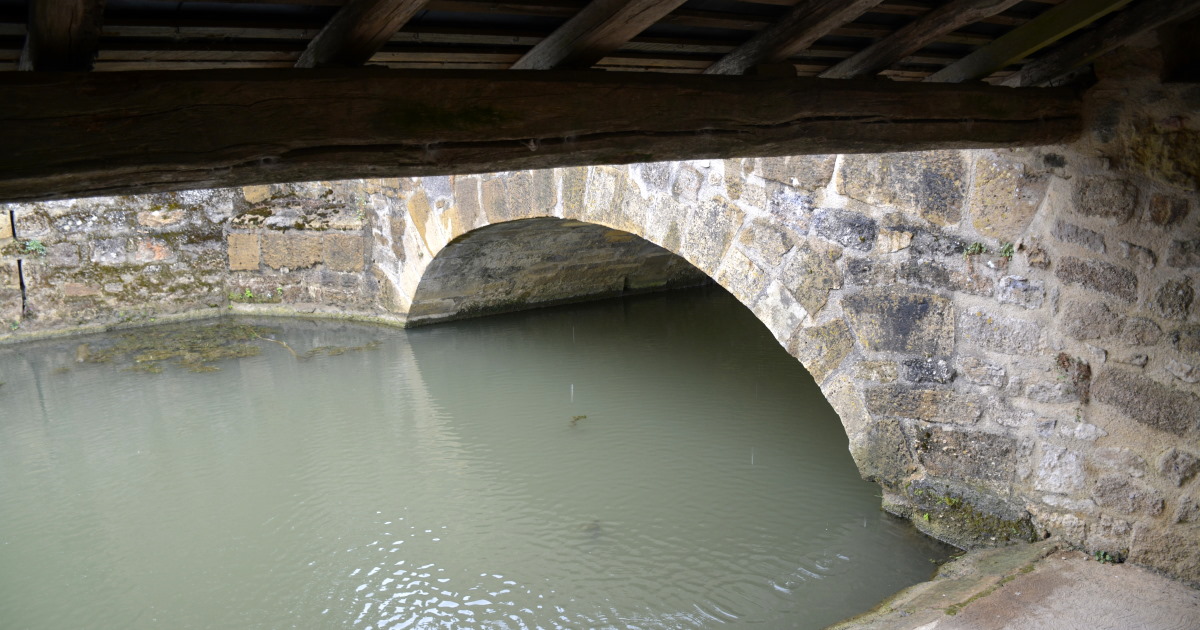 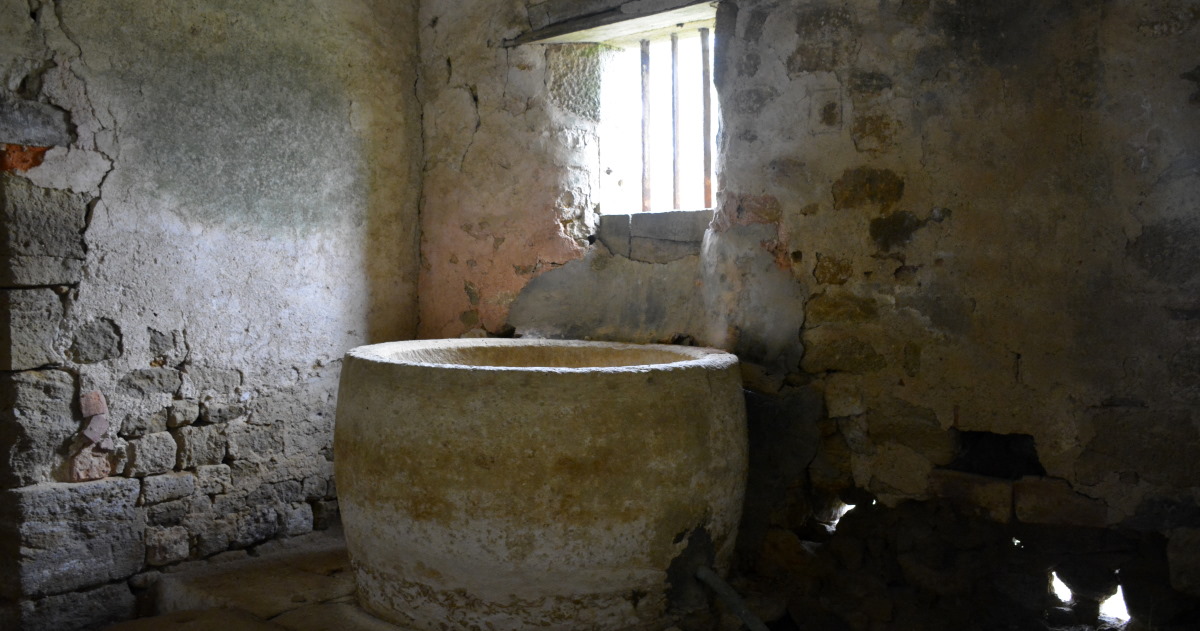 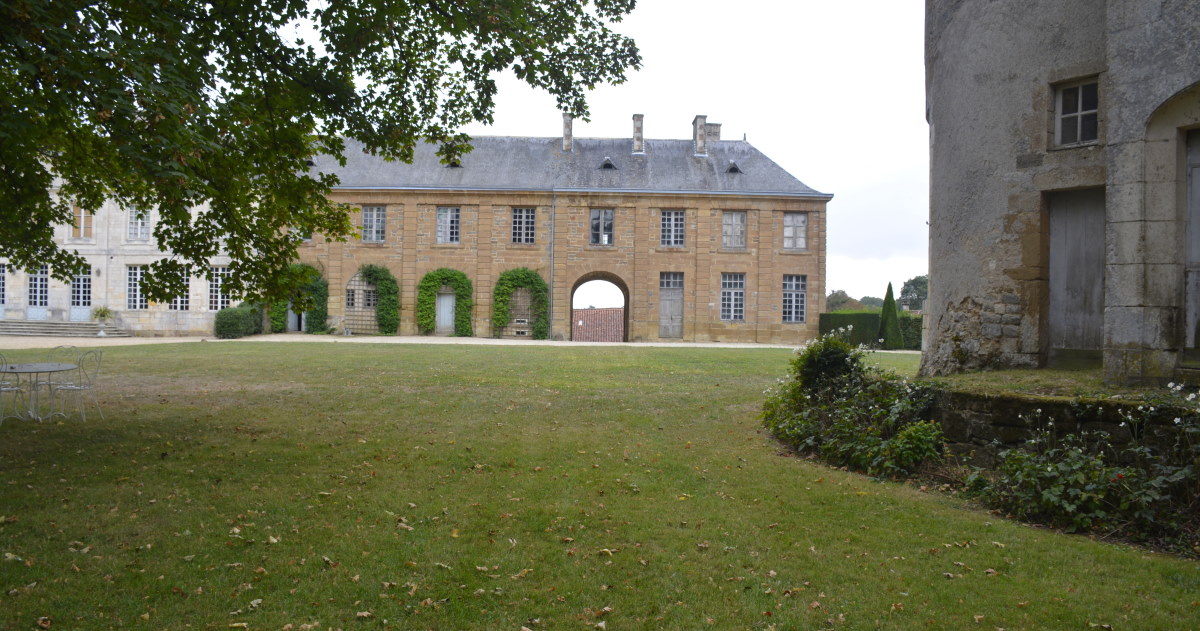