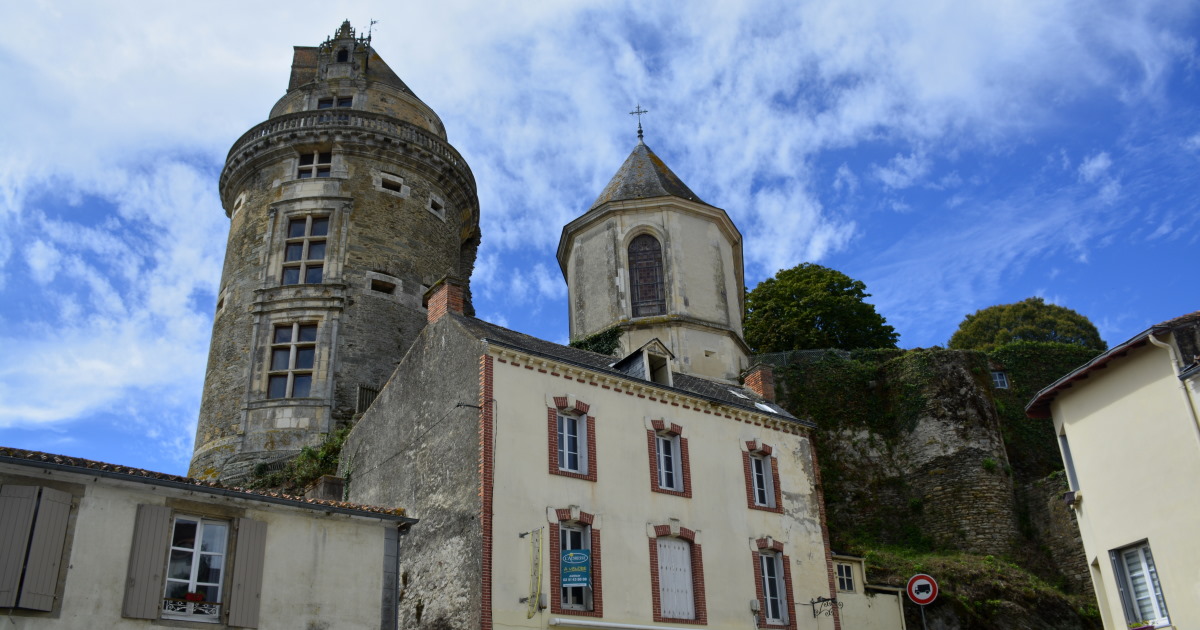 All summer long the Vendée offers fantastic opportunities to explore medieval life. Certainly le Puy du Fou our world renowned historical theme park is a place where you can do that and where your family will have a fabulous time. But if that's not in your budget, never fear. There are other opportunities to step back in time. In the following article we share the castles where you can bear witness to fierce reenactments, play games, and dive head first in a world of imagination. Enjoy!
The following are navigation images. Click a castle image to be taken to its info.

Château d'Apremont was established in the XIth century atop a rocky cliff overlooking the Vie river, both elements forming a clever natural defense of the castle which was only accessible via the north.

In fact the ruined castle that can be visited anno 2020 is the remainder of both the medieval fortress and the more elegant Renaissance castle that replaced it in the XVIth century by order of Philippe Chabot de Brion, Admiral of France and friend of King François I.

Architecturally, the castle was built on the cusp of the two time periods because in the XVIth century build, elements of medieval defense were adopted, while the château didn't yet receive the elegance the Renaissance is known for, however Château d'Apremont is indeed one of the first Renaissance castles in Vendée.

But what makes it truly unique in France is the cavalier vault which was carved into the stone rockface from the shores of the Vie river to the courtyard with the purpose of better  accommodating the arrival of visitors.

Sadly, in 1733 the castle was largely disassembled. From the medieval castle remains the main gatehouse with traces of the old drawbridge, the north and east walls and towers, and the western wall.

From the Renaissance period, remain the east and west towers, the chapel and the cavalier vault.

This lovely XVIth century French Renaissance château dates back to 1555. It was built for Jean Girard, who, at the time was the royal breadmaster (panetier) to King Henri II.

The person in charge of the King's bread was an important role in the royal household and held a proper title (as a side note, the title was made hereditary in the noble family of Cossé de Brissac in the 16th century).

Unfortunately Girard was assassinated in 1563, and building was discontinued until the XVIIIth century (1773), when the Count of Chaffault took charge of the project.

He developed the gardens and pond but unfortunately, the royalist fled the country in the Revolution and the work he had accomplished inside the château was heavily destroyed.

In 1920, the estate included a beach farmhouse known as la bicoque or 'the shack'. After retiring from politics, Georges Clemenceau rented the property from then owner, Amedée Luce de Tremont, with whom he became friends.

The former president of France dined at the château frequently. That is why, upon his death, la bicoque was donated to the state, becoming Maison de Georges Clemenceau (85520).

Today, the remains privately owned. The château has been completely restored to its former Renaissance glory and can be toured from cellar to rafter!

And that's just the chateau. The 86-hectare estate is open to the public as the Parc des Avonturiers, an adventure park for children featuring treasure hunts based on humanity's history of world exploration. Children learn about history in a beautiful natural setting with trails and in beautiful gardens feature exotic trees like Magnolia, Swamp Cypress, California Redwood, and Zelkova, and menhirs (the area is a hotbed of prehistory).

Video courtesy of Chateau des Avonturiers via their YouTube channel

FROM RESTORED CHATEAU, TO PREHISTORY, TO ADVENTURES AND TREASURE HUNTS... LOTS TO DO HERE!

A learning experience disguised in an adventure park.

Chateau de Sigournais was restored in the 15th century on the foundation of an earlier one (anno 1000.) In its restored state, the castle represents one of the best preserved examples of a military donjon in the Vendée.

During summer months there are often interesting art exhibits. The castle and its gardens are definitely something to see.

Special attention is granted to the young visitors with a Knight's Challenge game book.

Located right on the border of Vendée and Deux-Sevres on the Sévreau river, Château St. Mesmin would have been surrounded by water moats.  It was constructed annno 1370 by the lord and knight Pierre de Montfaucon. Its seigneury, however, belonged to Guillaume Larchevêque, the lord of Parthenay and the fortified castle in Vouvant.

Though fortified from the start, a more intensive fortification took place in 1372-1375... without permission from the lord. This  resulted in a feud between the families.  Guillaume Larchevêque invaded, burned and looted the castle of Saint-Mesmin, prompting an investigation and a court case.

The 28-meter tall tower was added in the 15th century. The castle stayed in the Montfaucon family until 1548 when by marriage it went to the family Plessis de la Bourgognière, and then the Saint-Phal family until 1650. Then it was sold to the family Petit de la Guierche  and in the time they owned it, the chateau and grounds became a marquisate (border government).

During almost its entire life the Château St. Mesmin was used as a family residence, going from family to family by marriage or through sale.

The family Proust, who owned the castle from 1818 to 1990 allowed it to be used as a military hospital in WWI.

Today the castle is in the care of the departments Vendée and Deux-Sevres. The castle was renovated and even made accessible for the disabled. Château St. Mesmin is now a superb destination to learn about medieval life.

The latest archeological research revealed that the first stone foundations (the bell tower) of the Château de Talmont date back to the year 1024.

Under the authority of the Count of Poitou and Duke of Aquitaine, Guillaume V, this coastal territory (at the time the castle was IN the sea) needed to be defended from invasions by the Normans.

It was the beginning of a turbulent history that went all the way through to the time of the Plantagenets.

Its location not only allowed it to be built with rocks mined from the sea, which at the beginning of the XIth century was unusual, it also stood in defense of the the biggest port between Nantes and Bordeaux.

Part of the castle's strategic dominance over the area was being bordered by the Sauvagère and the Payré rivers. Twice a day, at high tide, the castle was completely surrounded by water.

From this time through the centuries to 1794 when the area had silted up and the castle was already being dismantled, it changed hands between powerful lords and French Kings, between Catholics and Protestants.

Perched on a hilltop overlooking the valley where the rivers Sèvre Nantaise and the Crûme flow together, the Château de Tiffauges is strategically located for battle.

Geoffrey Thouars built the castle in the 12th Century, its ramparts and towers protecting the village by the Crume river. In 1420 his daughter Catherine de Thouars married the infamous Gilles de Rais, who fought alongside Charles II and Joan of Ark in the Hundred Years War. Château de Pouzauges and Château de Tiffauges were part of her dowry.

Château de Tiffauges became the place where Gilles de Rais later committed atrocities against children. Believing he could turn their blood into gold, he performed experiments on them. Around two hundred kids disappeared from the area and nearby villages. In October 1440, he was tried for heresy, sodomy and the murders of one-hundred-and-forty-plus children. He was sentenced to hang. In folkloric tales of the 15th Century, he is frequently confused with the mythical Bluebeard - le Barbe-Blue.

At the end of the 15th Century the Viscounts of Thouars inherited the castle. It burned down in 1569 in repeated attacks during the Hundred Years war but in 1793, in one more show of force, it played a strategic role in the last Vendéen victory of the Religious Wars, the Battle of Torfou [Tiffauges].

Château de Tiffauges is the largest medieval castle in the Vendée area. Today it is a haven where children happily participate in medieval reenactments, archery and other events. 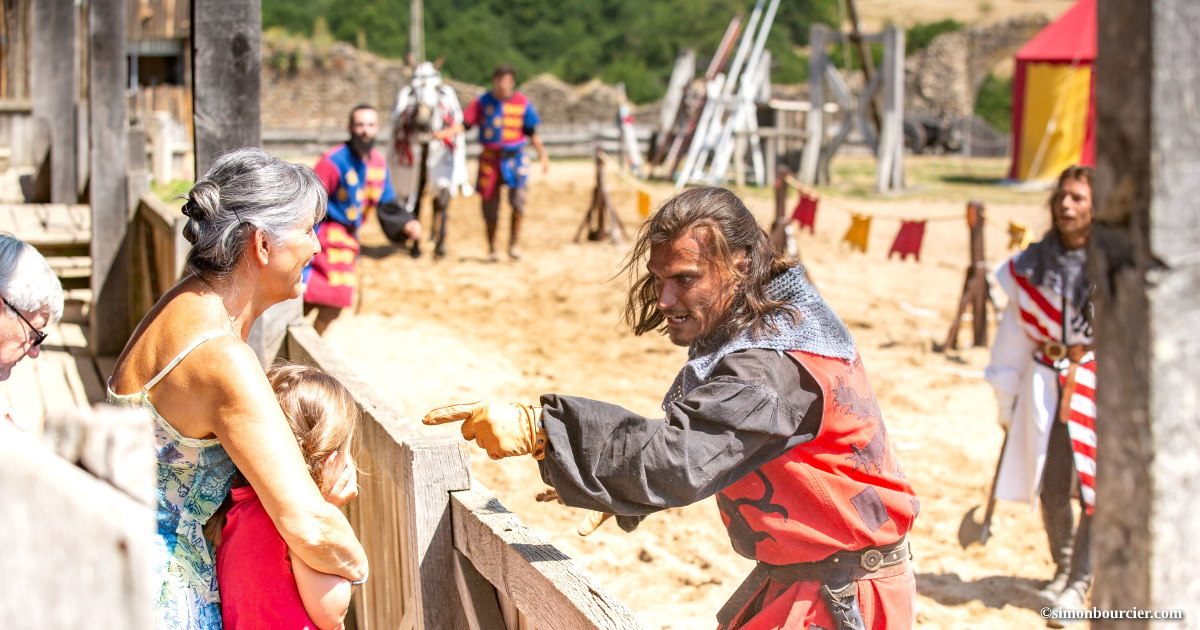 The donjon of Bazoges-en-Pareds rises from the Vendée farmland like a medieval skyscraper. Measuring 30 meters high and composed of six levels, it is impressive. The two rooms on the second level of the castle are beautifully vaulted.

During its history, the castle changed hands many times until in 1859 it was purchased by the Pervinquière family. They owned it for one-hundred-and-thirty years.

Today the donjon and its surrounding structures, like the bakery and blacksmith forge, still exist.

The garden was created in 1994 after the model of 15th Century medieval gardens: from the sundial in the center are sixteen squares enclosed by chestnut fascines (bundles of branches entwined around low stakes forming a border). The individual squares are designated for vegetables, for aromatic plants, medicinal herbs, plants used in witchcraft, flowers and an orchard.

In medieval times, the garden represented the heart of activity, whether it was for storytelling, sustenance or healing, or courtly love. In summer, the Château de Bazoges-en-Pareds is home to many awesome events, kids workshops, and spectacles.

THANK YOU FOR SHARING THIS ARTICLE