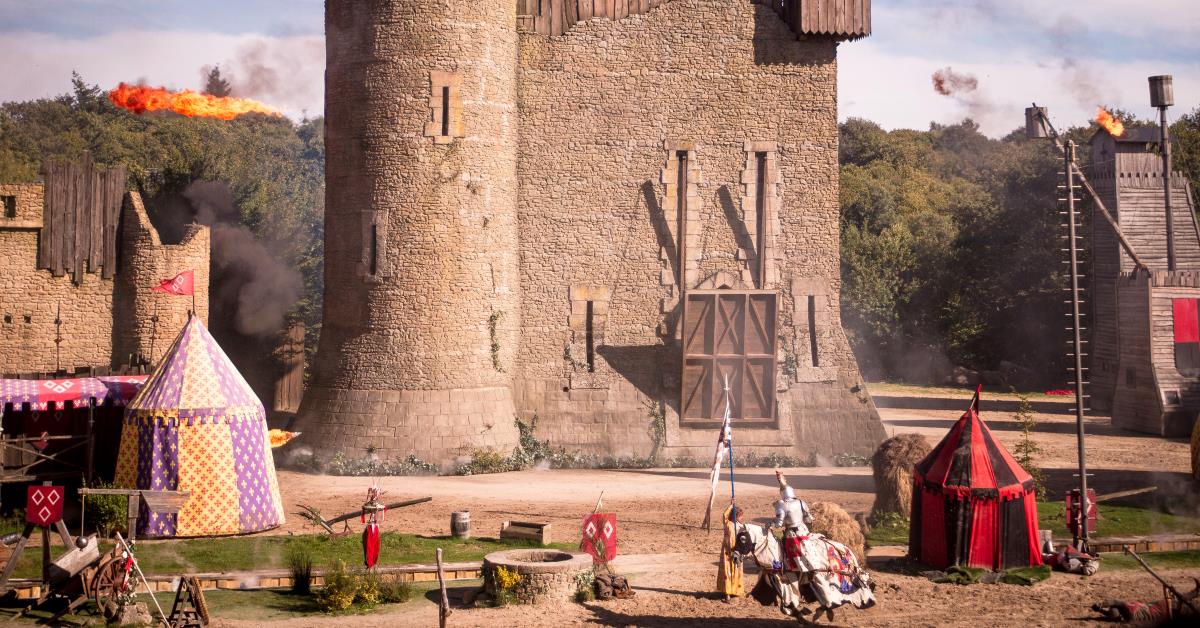 Located in north-Vendée, the theme park le Puy du Fou is a multi-award winning park without rides or rollercoasters. And yet, it is deemed by many the best in the world. Why is that, you wonder? Spread across 50-hectares are venues that are home to the most epic, period-specific shows you'll have ever experienced. These shows depict true stories in our history from Ancient Rome through the Viking invasions, from the Middle Ages all the way to the belle-epoque and the World Wars. And everything in between. That is Puy du Fou described in a nutshell. And no, you should absolutely not miss it!

In 1977, the ruins of the chateau at le Puy du Fou ware discovered by park founder Philippe de Villiers. So inspired was he by the surroundings that he imagined a large show to take place here depicting the history of the Vendée, a show which he wrote, designed and produced and saw its first live performance of the very first 'Cinescenie' just one year later featuring 600 actor volunteers in period costume.

Throughout its 45-year operation, the park has grown and grown, now featuring no less than 17 shows using the latest in technologies, cattle, cats, birds, horses, pyro, and highly trained actors and stunt-people. The park also features 4 different villages set in history, a 16-metre-high carillon (one of largest in the world) and several nature areas which are beautifully landscaped.

The gardens by which you navigate the park are stunning. The arenas, huge.  Think, renaissance fair on an epic scale.

The costumes are designed in authentic fashion and stitched on site, so much so that the organization frequently lends its art to historic film productions. Even you can wear them in one of several photo booth settings for a lovely souvenir of your time spent here.

There is a private school attached to the park as well, something straight out of Harry Potter. Its students explore the world of academics as well as entertainment, horse riding, performing arts, stunts etc. from a young age. You can see the students perform in the show entitled Le Ballet des Sapeurs.

History is depicted by way of spectacle, crazy mindboggling live stunt shows happening all around you. The bird show alone has over 300 birds circling overhead and landing on command. You will see things that have you wondering for days... how did they do that?

Le Puy du Fou is more than an adventure down history lane, a place of secrets.  There seems to be a code of ethics not to talk about it too much... not only by the owners of the multi-award winning theme park, but by the millions of visitors that leap into the deep end of history year after year, time and again.

In truth, there are videos online, but we highly recommend letting yourself be surprised.

Le Puy du Fou is both the biggest attraction in the Vendée (indeed in France) and its biggest enigma.

We promise that you'll have a wonderful time here. At any age!

For frequently asked questions about Puy du Fou, keep reading (or find them under the YouTube video)

Last but not least, the evening and nighttime show LA CINÉSCÉNIE which saw its humble beginning in 1977, has grown to be the biggest such event in the world. On a stage of 23 hectares with the castle as a backdrop, it is home to 2550 actors and 28,000 costumes for a one-and-a-half hour show you will never forget.

It is legendary. In the grand scheme of bucket lists, le Puy du Fou and La Cinéscénie should not be missed.

Le Puy du Fou is located outside the village of Les Epesses, in the Haut Bocage Vendée. It is close to Les Herbiers and Cholet, or 45 minutes from La Roche-sur-Yon, and one hour from both Nantes or Angers. If you're vacationing in beautiful south-Vendée, you're only about 30 minutes away by car.

We recommend you book as soon as possible. For it's 45th anniversary year in 2022, the park is open from 9th April to 6th November.
By booking accommodations in the wider Vendee rather than at Puy du Fou itself. While their accommodations are part of an immersive experience in history, it is also a little more expensive. You can save more by taking your picnic to the park rather than eating at its restaurants. Park savings begin by ordering your tickets online or call the reservations hotline. Where you have to be careful is making spur of the moment decisions at the park rather than choosing packages ahead of time. Obviously the bigger the package you purchase, the more expensive, but commensurately the more money you save. Do your research carefully before making reservations.
July and August are the two busiest months at the park because that's when most Europeans have school breaks and vacation time. We recommend you pay attention to the French school breaks as it's a very popular destination, also among the locals who frequently get season's passes to take advantage of the "quieter" months. The Cinescenie typically sells out early in the season, so get your tickets sooner rather than later. For the weather, May through mid-July and Mid-August through September. The Vendéen climate from spring through fall is typically wonderful, but it can be quite hot mid-July to mid-August.
La Cinéscénie, Les Noces du Feu (both nocturnal shows), Les Vikings, Le Secret de Lance, La Renaissance du Château, Les Chevaliers de la Table Ronde, Le Signe du Triomphe, and Le Bal des Oiseaux Fantomes. But, we can confidently say that you should try to see all of them.
We have honestly been asked if it's possible to see le Puy du Fou on the way south to the Pyrenees or Spain, for an afternoon stop. The answer is, absolutely not. While ticket prices are very fair in return for value, it would be a shame not to take full advantage of everything the park has to offer. We recommend you set aside two to three days in order to catch all of the shows plus the evening shows. If you're going to do it, do it right! As part of a bigger vacation in which you really want to explore the Vendée and many of the things it has to offer, we would recommend a full park day + the Cinéscénie show.
As with any theme park, the cost of visiting le Puy du Fou 'en famille' can certainly add up. We feel it is up to your budget, starting from your tickets + what you would normally eat and snack on in a day + a take-away treat at the park e.g. a Nutella crepe. Your savings begins by ordering your tickets online or call the reservations hotline e.g. you can save €8 pp on adult tickets, €6 pp on a handicap ticket, and €6 pp on children's tickets. You save more for multiple days (each day the ticket price goes down). Families with multiple family members save even more. Or for buying park + Cinéscénie tickets. It will be beneficial to check ticket info here. Obviously the bigger the package you purchase, the more expensive, but commensurately the more money you save. Reservations hotline +33 (0) 820 09 10 10
Yes, in fact, between take-away/ fast food stands spread throughout the park, and many types of sit-down restaurants up to and including a fine dining experience, there is something for every budget. Prices for restaurant meals range from €16.90 p/adult to €41.00 p/adult (special menus for children). Research your options here and be aware that when booking in advance, you can save up to 20% by booking in advance. You should also be aware that some restaurants have photographers walking around to capture your Puy du Fou dining experience.
Yes, in various locations and in a few of the restaurants. We recommend that you wait to purchase any pictures until you leave the park. At the photo-shop located in the 'railway station' in the Belle Epoque village (on your way out of the park), you can see all of the pictures taken throughout the day and select the ones you like. If you want this kind of keepsake, we recommend you factor that in to your budget.
A backpack with weather protection. Many venues are located outside, so be prepared with hats, sunglasses, water, and SPF50 sunscreen.
Guide to Family Fun in the Vendée