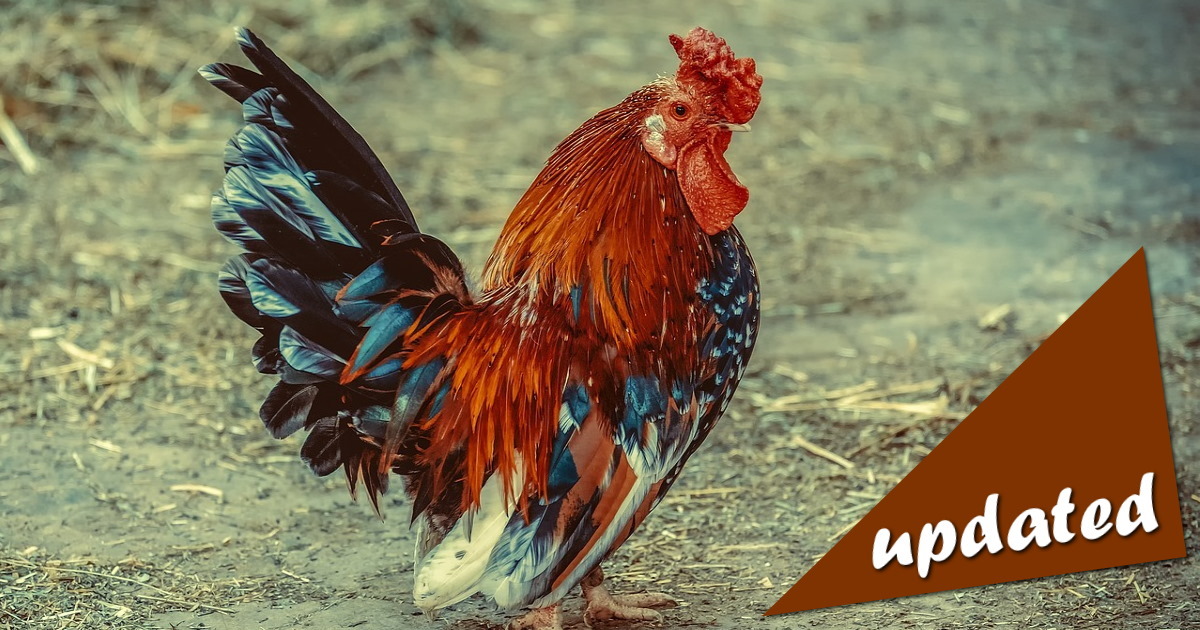 We are in bird migratory season. As of March 11, 2022, France has detected 649 outbreaks of highly pathogenic avian influenza (HPAI) in livestock, 36 cases in wildlife and 15 cases in backyards. Since the end of February, outbreaks of HPAI have increased sharply in the Pays de la Loire. In the departments of Vendee and Loire-Atlantique new measures have had to be deployed to help slow the spread of the virus. We've gathered information on the latest measures for you, including links to the official decrees issued by the French Ministry of Agriculture, maps of detection zones, interactive maps etc. In all, thirty-four countries are affected by the HPAI virus on the whole of the European continent.

The French Ministry of Agriculture has decided to increase measures in those areas where H1N1 appears to be spreading like wildfire. By decree, they have ordered preventive depopulation across the previously determined restricted territory where nature reserves and commercial farms are being closely monitored. To date, in the Vendée, there have been 532 outbreaks in farms, 4 wild animals (a goose, 2 gulls , and a greenfinch whether or not in captivity) leaving most of the area affected. The following measures are being introduced:

As of 24/04/2022, France has had 1,330 outbreaks of highly pathogenic avian influenza in livestock, 46 cases in wildlife and 30 cases in backyards. We will link to the decree of the Vendee prefecture as soon as it is available. Source 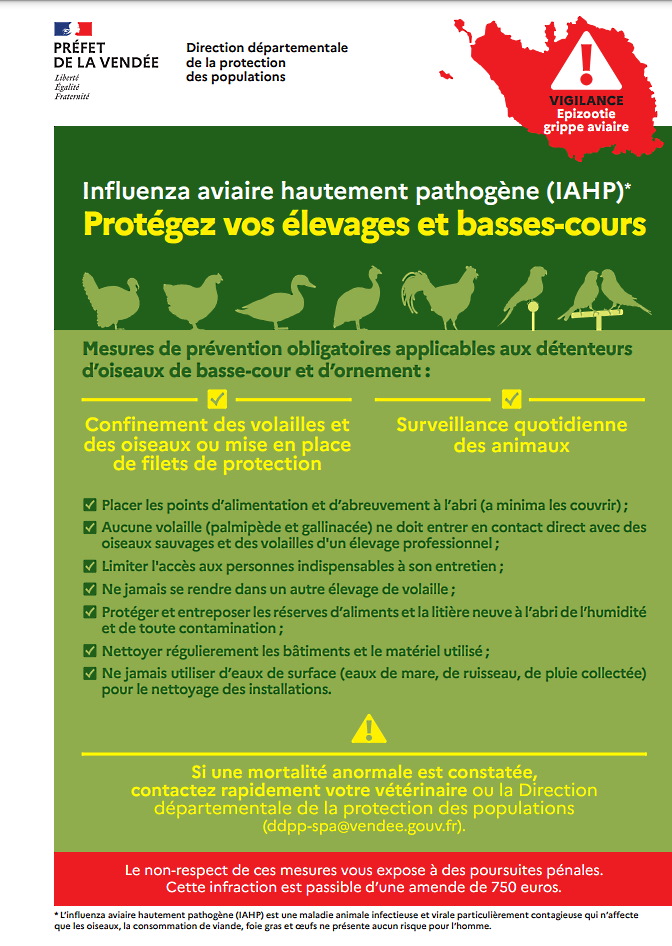 A first outbreak of highly pathogenic avian influenza was detected on November 26 in a commercial laying hen farm in the northern regions of France. On December 16, an H5N1 type outbreak was confirmed in a duck farm in the Gers. Since then, several departments in the South-West have been affected with numerous cases (Landes and Pyrenees-Atlantique.) While the situation there stabilized, outbreaks of HPAI have increased sharply in the Pays de la Loire since the end of February.

The virus is spreading rapidly in the Vendée. As of March 11th 2022, 187 outbreaks were confirmed, compared to 58 on March 4th, and 9 on February 24th. Birds are being actively culled in the larger affected regions of Vendée and Loire-Atlantique. Unfortunately the epicenters are in the vicinity of breeders, so the situation is being very closely monitored.

The Ministry of Agriculture calls for strict compliance with biosecurity measures and increased surveillance by professional farmers, individual bird owners and hunters.

REMINDER  : The consumption of meat, foie gras and eggs – and more generally of any poultry-based food product – does not present any risk for humans.

High risk zones are the zones identified by the authorities as being "areas at risk of spreading the highly pathogenic avian influenza virus.

A "zone at risk of spread" consists of the parts of the territory in which the probability that the highly pathogenic avian influenza virus spreads from one farm to another, once the virus has been introduced into the zone concerned, is higher than the rest of the territory. If you live in one of the following villages in the Vendée, please consult the latest regulations and/or ask your mairie for the necessary steps to put in place to protect your birds.

The entire metropolitan territory was announced as high risk on 5th November 2021. Therefor the following measures apply in addition to the regular preventative measures:

These two decrees by the French Ministry of Agriculture are current 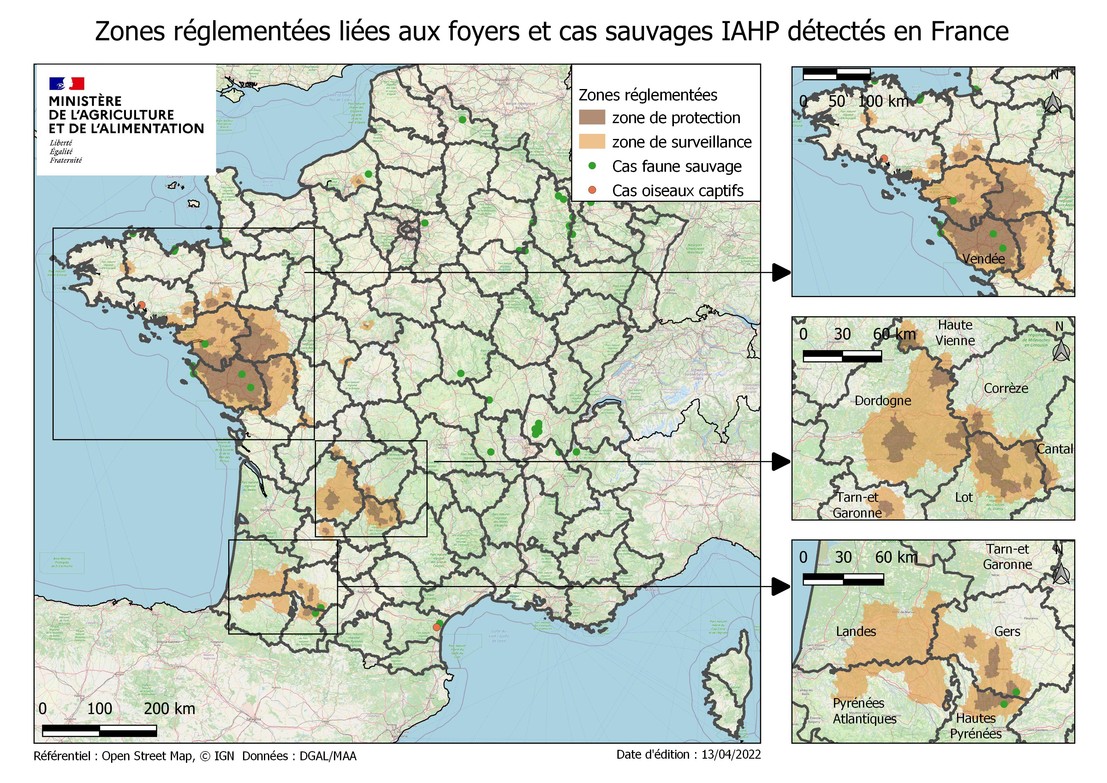 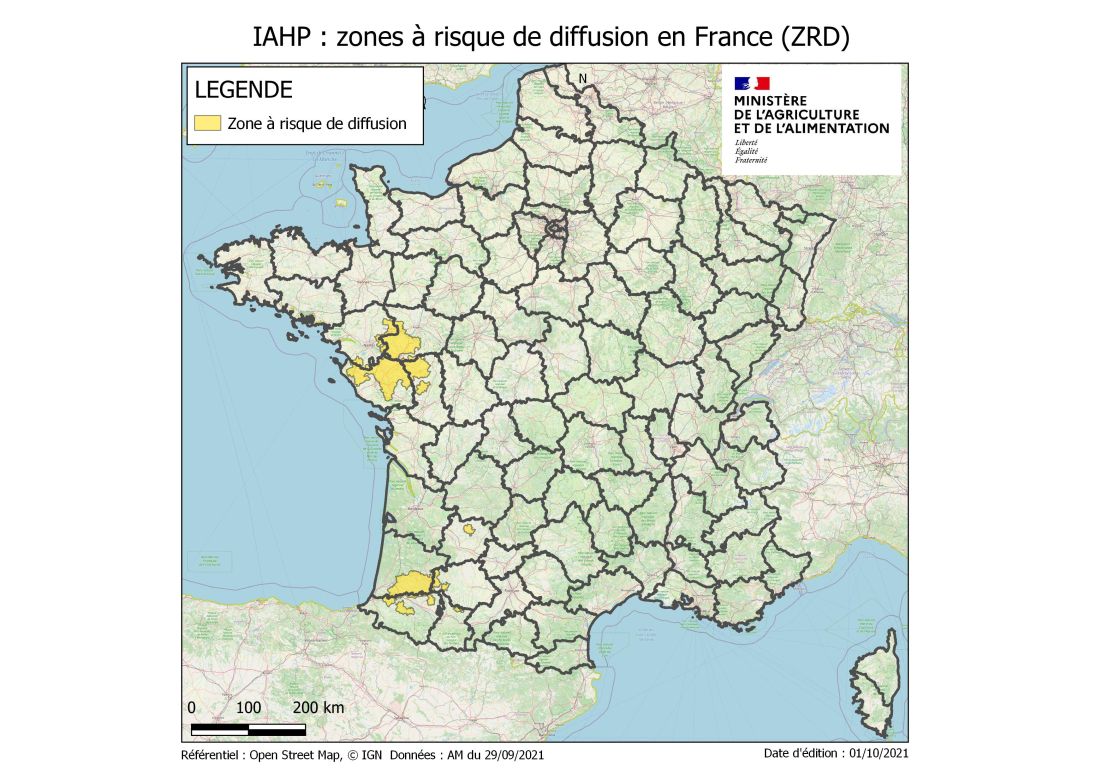 What about the bird flu and keeping chickens? 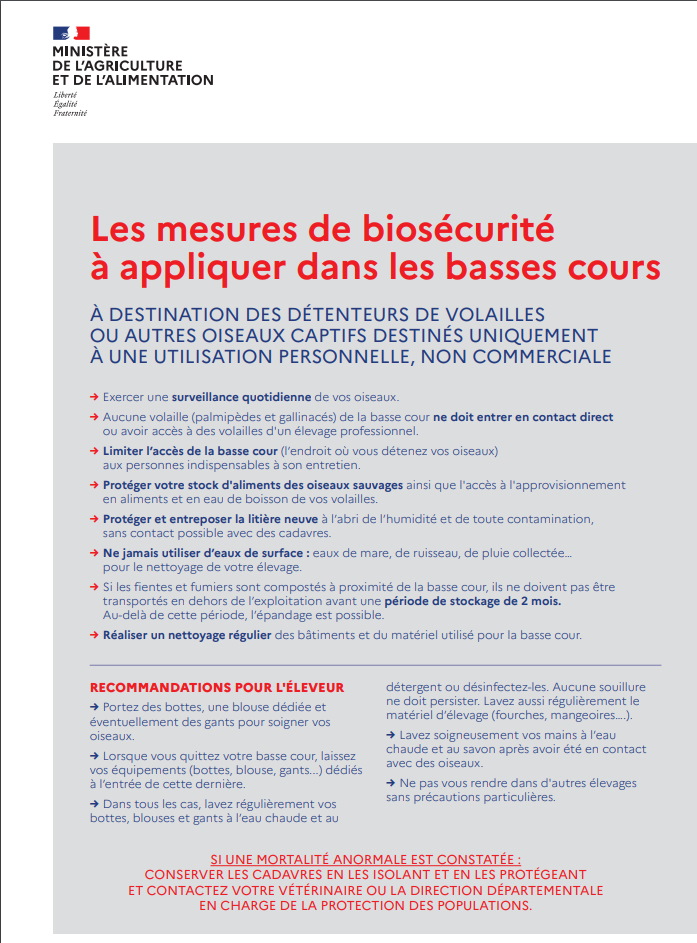 As a keeper of chickens or geese or other birds, which is obligatory to indicate here.

Biosecurity measures to be applied in FOR POULTRY KEEPERS OR OTHER CAPTIVE BIRDS INTENDED SOLELY FOR PERSONAL, NON-COMMERCIAL USE

RECOMMENDATIONS FOR THE BREEDER

IF ABNORMAL MORTALITY IS OBSERVED:

What is the Avian Flu? –

Avian Influenza (or bird flu) is a highly contagious viral infection that can affect all birds and cause misc. issues depending on the pathogenicity of the virus and on the species. A Highly Pathogenic Avian Influenza (HPAI) - strain H5N8 has been detected in wild birds, especially ducks, geese and swans as well as birds of prey.

The disease is highly contagious to wild and to domestic birds in areas of wild bird migration. Symptoms are mainly neurological and easy to recognize if you happen upon a bird that was infected, but the disease is very deadly. If you have an adventurous outdoor cat who likes to catch birds, be aware that the disease is as dangerous to cats.

If you see a bird staggering about and falling over, unable to stand on its feet, or dead, it's important to inform your veterinarian immediately to investigate.

As early as 1878 the "bird flu" was distinguished from other diseases that caused high mortality rates in birds but until the 1950's it was more endemic (concentrated to one area.) Until the 90's outbreaks were sporadic and contained.

But from the 1990's our human consumption of poultry (chicken, turkey, duck) increased so much that the cultivation of birds grew by huge percentages worldwide.

Suddenly there was a clearer distinction between LP (Low Pathogenic = less contagious) and HP (Highly Pathogenic = highly contagious) strains of the disease. The type presenting the greatest risk is referred to as HPAI.

While the disease is transmitted from wild birds to domestic birds and farm animals through wild bird migration, the spreading of the disease on the ground is increasingly more common due to a high density of farms and the frequent transport of flocks from the intensive poultry production needed to feed us.

How is the spread of Avian flu monitored?

The monitoring of wild birds and wild bird migration is performed by the French Biodiversity Office  (l’Office français de la biodiversité) and the Réseau SAGIR network,  an epidemiological surveillance network for birds and wild terrestrial mammals in France, which partners with the National Office for Hunting and Wildlife. Monitoring is reinforced throughout the national territory.

Can humans be contaminated with HPAI serotype H5N8?

Recent research into the genes of the now common Spanish flu virus shows it to have genes adapted from both human and avian strains.

Further research shows that an Influenza A type of flu has the potential to be transmitted from animals to people, and in rare cases from person to person. Any virus that allows a mix of genes can create a new virus subtype (called an antigenic shift) which humans have almost no immune protection against.

As an example, in 1996, a different type pf bird flu–Influenza A/H5N1–was discovered in a goose in China and since 2003, over 700 human cases of Asian HPAI H5N1 have been reported to the World Health Organization. There is concern that an antigenic shift in an Influenza A type of flu may cause a pandemic in the future. Not exactly good news in Covid-19 times!

But currently we are dealing with a confirmed strain of H5N8 bird flu found in samples from wild birds. This strain of bird flu is considered one of the less pathogenic subtypes for human beings and no human cases have been identified.

Vendée area has many poultry farms. What does it mean for our farmers?

The farmers with poultry and other captive bird farms in any of the 45 French departments that were placed on high alert are obligated by law to apply a strict management plan or an Avian Influenza control plan consisting of clean clothes and disinfecting boots before entering livestock areas; not inviting outside persons to the farm, except e.g. a veterinarian, who must also follow the same sanitary measures etc. In case of suspected illness or deaths, farmers must notify the Vétérinaire Sanitaire without delay.

There is no cure for the disease. In case of an outbreak on a farm, unfortunately all birds are culled by using a suffocating foam that is sprayed into the barn. Then strict sanitary measures are taken to destroy the birds and to disinfect the area.

**ALERT** PROTECT YOUR FELINE FAMILY MEMBERS.
THE AVIAN OR BIRD FLU IS HIGHLY CONTAGEOUS AND DEADLY FOR CATS!
Avian influenza in cats can show a variety of symptoms and usually lead to death. Cats are able to get infected by either consuming an infected bird or by contracting the virus from another infected cat. **ALERT**

What about our food? Can we still eat chicken, duck, turkey and eggs?

YES, per the French Government website and this article it is safe to consume poultry products.

Culled animals are not put into the food chain.

Avian influenza is not transmissible to humans through the consumption of meat of avian origin, eggs, foie-gras and or any other food product derived from poultry.

It can be transmitted to cats, so to be safe do NOT feed your cats raw chicken!

It is recommended to fully cook your eggs i.e. no runny yolks!

The ins and outs of mushroom foraging in France