The Feast of Saint Valentin was established by Pope Gelasius I in 496AD to be celebrated on February 14 in honor of Saint Valentine of Rome, who died on that date in 269AD. In the 14th and 15th centuries, the celebration became associated with romantic love when notions of courtly love flourished, possibly by association with the “lovebirds” of early spring. In 18th-century England, it grew into an occasion in which couples expressed their love for each other by presenting flowers, offering confectionery, and sending valentines (greeting cards). Valentine’s Day symbols that are used today include a heart, doves, and a winged Cupid with bow and arrow. Since the 19th century, handwritten valentines have disappeared in favor of mass-produced greeting cards. 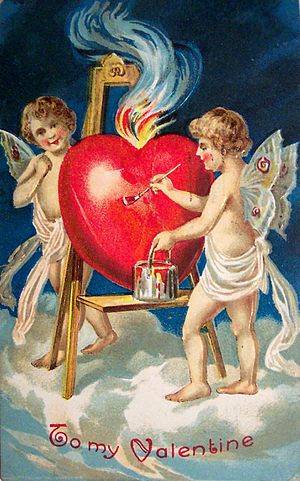